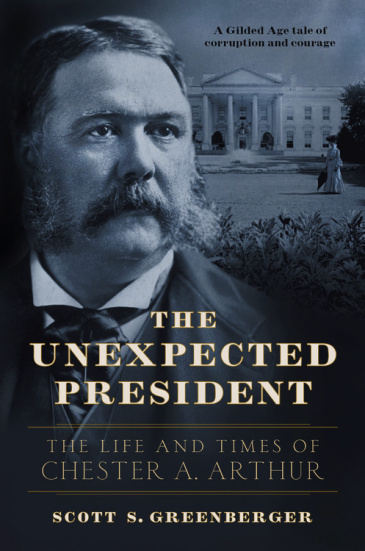 Greenberger makes a valiant case for the fact that, while Arthur does not deserve a spot on Mount Rushmore, the nation’s 21st president became a force for good against government corruption. Along the way, according to Greenberger, Arthur transformed from the epitome of that very system to a courageous reformer.

Arthur was born 1829 in rural Vermont and died in 1886 in what became his bailiwick — New York City. He ordered his personal papers destroyed weeks before his death. Thus, Greenberger, an editor of the news site Stateline, had to draw on his reportorial skills to create a very readable biography of an arcane subject without benefit of these sources.

When Arthur assumed the presidency after the assassination of James Garfield, he had a well-deserved reputation as a politician who enjoyed fine clothes, food, and spirits paid for via not-very-kosher means.

It was not always so. As Greenberger details, Arthur came from austere stock. His father studied law until he found religion, taking his large family to parishes in New England and Upstate New York and preaching abolitionism to unreceptive audiences. This life did not appeal to his son.

Ironically, his father’s abolitionist connections landed the younger Arthur a job as an attorney in New York City and led him in a new direction. Although he missed friends and family, he never looked back. He “married up” when he wed Nell Herndon, the daughter of a U.S. naval officer from Virginia. Providing her with the lifestyle to which she was accustomed — and which he soon enjoyed, too — required money and connections. He actively sought both.

Nell sympathized with secession during the Civil War (several family members enlisted in the Confederate Army), according to Greenberger. Arthur followed a different path. The governor appointed him a brigadier general and the state quartermaster general’s New York City representative.

“General Arthur” had control of contracts for everything from ammunition to underwear. When his term ended in the middle of the war, he did not re-enlist. Instead, he used this experience to get rich.

Within a few years, he was deeply connected with Roscoe Conking, a senator from New York. Another barely known name today, Conkling was wily, unprincipled, and very successful as head of the so-called Stalwart wing of the Republican Party.

Greenberger recounts the main activities of the Stalwarts, which mostly consisted of maintaining themselves in power. Stalwart crony Arthur became head of the New York Customs House, a hugely influential post at the time. Paybacks were part of the game, and “Chet” was an enthusiastic player.

Conkling eventually overplayed his hand, leading to his fall and Arthur’s rise. To Greenberger’s credit, his highlights of the backroom machinations that led to the outcome are accurate but fast-paced. We feel and smell the proverbial smoke-filled rooms of powerful white men. A deadlocked Republican convention in 1880 resulted in the nomination of Arthur as vice president.

Even though the country had seen three presidents die in office within the previous 40 years (William Henry Harrison in 1841 and Zachary Taylor in 1850, in addition to Lincoln), no one gave much mind to the qualifications of the person the proverbial heartbeat away from the presidency. Customary for the time, the vice president was not part of the president’s policy-making circle. In fact, when Garfield lingered between life and death in the summer of 1881, Vice President Arthur deliberately stayed in New York, away from government.

After several months of botched medical care, Garfield did die, and “the unexpected president” took office on September 19, 1881. Greenberger reports such reactions as the following: “horror at the death of Garfield, but stupefaction at the elevation of Arthur.” His cronies expected the gravy train. But that did not happen. Arthur froze out Conkling and signed into law Civil Service reform, among other accomplishments.

Greenberger credits Arthur’s pivot to a series of letters he received from a 31-year-old woman named Julia Sands. An avid political watcher and invalid living amongst her wealthy family, she began writing the president to offer advice. We don’t know Arthur’s specific reaction — but, after her many fervent invitations, he visited, showing up without notice on an August evening in 1882.

Greenberger also provides a surprise twist at the end in relation to her correspondence. I was not totally convinced that these missives provided enough of a counterweight to Conkling and the general times, but I accept Greenberger’s hypothesis based on his research.

Greenberger interprets Gilded Age America, especially New York and Washington, through newspapers and other accounts. The political period between Lincoln and Theodore Roosevelt is murky for most of us, and he is particularly helpful in explaining how Grant’s presidency went astray and was almost resurrected for a third, non-consecutive term.

In The Unexpected President, Greenberger has written a book for readers interested in history but who are not specialists in this era. Those curious about how people can change, against all odds, will also enjoy it.

Paula Tarnapol Whitacre is author of the biography A Civil Life in an Uncivil Time: Julia Wilbur’s Struggle for Purpose (Potomac Books, 2017) about a social reformer in Alexandria during the Civil War and Washington, DC, during Reconstruction and the Gilded Age. Her website is www.paulawhitacre.com.