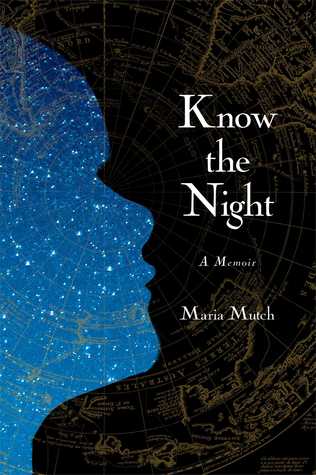 The relentlessly beautiful Know the Night is described as a memoir, but it’s really a biography of Maria Mutch’s brave son Gabriel. Or possibly it’s a biography of polar explorer Richard Byrd. Or of jazz musician Thelonius Monk. Or of the notion of language itself: at age 7, Gabriel, who has Down syndrome and autism (although the latter is just “one of his diagnoses; there are others”), tells his teacher, “all done,” which turn out to be the last two words he speaks. But as Mutch exquisitely demonstrates, that doesn’t mean eloquence has fled as well.

“Orion is hunting,” the book begins (or, as will become a refrain, “begin[s] again”), and so is Mutch, hunting for ways to describe a two-year period of long, harrowing nights when Gabriel, after years of sleeping peacefully, no longer does: “black holes drink the universe while Gabriel’s squeals and bouncing rock the house…In the absence of speech, then: spikes of sound, vortices, a repetitive soul-splitting screech. Not rage or frustration, not right now, but a wild laughing shriek. Speech pulled to its breaking point. Speech eviscerated. It’s just after midnight, and I walk the cold hall to his room, pulled by a loop of auditory fire.”

Mutch’s memoir loops, too. We return to the story of Gabriel’s birth, to the story of the pregnancies before Gabriel that she lost, to stories of her husband, and of Gabriel’s younger brother, “S,” who possesses his own brand of aching eloquence. Mutch quotes a letter from her youngest son: “This is going to be bad news and here it is,” S writes to Mutch and her husband, “our class is going to slay our plants. Do you know what slay is?” Mutch doesn’t answer, but I did: yes, I thought, and then, no, and then, where did ‘slay’ come from, anyway?

Indeed, much of this book is about making meaning from what might otherwise appear meaningless, and in this lonely search Mutch is aided by two unlikely guides.

One is as much her son’s guide as hers: jazz, particularly live jazz, becomes “one of the things that makes sense of night,” and so mother and son start frequenting clubs, where he “acquires a kind of stillness, or being, or communion.” (Let the rest of us parents adjourn to Chuck E. Cheese’s for our kids’ parties — Mutch movingly recounts how more than once, they hold Gabriel’s birthday party, with a full complement of classmates and the requisite cake, in a jazz club that probably hadn’t seen anyone under 60 in quite some time.)

This fascination with jazz leads Mutch to the story of Thelonious Monk, in whom she finds a kind of kindred spirit for Gabriel: words are neither’s primary means of communication (a musician on what would become Monk’s final tour said that Monk uttered all of two words the entire time); both man and boy are given to silences, interruptions, and behaviors that others can’t comprehend.

Mutch locates her own kindred spirit in an even more curious analogy: the story of polar explorer Richard Byrd, and particularly his 1934 visit to the South Pole, when he sought to survive on his own through six months of continuous polar night. He fell short of his goal and barely survived, an adventure he recounts his memoir, Alone, which captivates Mutch: “even the title seemed commiserating,” though “Byrd wasn’t the first discovery in my search for solace. Initially, I was intrigued by explorers in cold places…and the idea of their aloneness, and not loneliness necessarily but singularity…So maybe the idea has to do with waiting, or with being found, or being found too late. The idea has to do with the attempt at exploring a difficult place and with whether or not there is rescue.”

Mutch braids Byrd’s story with her own, complete with his extensive provision lists (she notes that “whatever explorers deem vital to survival in Antarctica, they never seem to fail to include chocolate”), and the will-he-or-won’t-he-make-it drama provides Mutch’s account with a counternarrative that’s as page-turning as it is poignant: because of course Byrd makes it, he survives to write his book, and in his (literally) darkest hour, his companions come to his rescue. No such rescuers will come for Mutch or her son.

Or rather, the book seems to say, they come all the time, and in the most unexpected ways. When, near the end of the book, Mutch describes discovering a breakthrough in how not just to care for Gabriel, but live with him in the world, it feels exponentially more momentous and significant than any of Byrd’s accomplishments.

“Perhaps,” Mutch writes, “you didn’t know this was a love story.” But I did, and I loved it.

Liam Callanan is the author of the novels The Cloud Atlas and All Saints and the forthcoming story collection, Listen. He’s previously explored the world of children with Down syndrome in Commonweal. He lives in Wisconsin and on the web at www.liamcallanan.com.