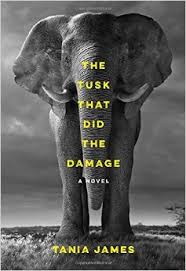 In this, her second novel, the gifted Tania James, author of Atlas of Unknowns and the short-story collection Aerogrammes, turns her clear gaze to a South Indian elephant poacher and his gentle brother; a young American documentary filmmaker collecting footage in a wildlife preserve; and a massive elephant nicknamed “the Gravedigger” by the families of the farmers and workmen he has trampled to death and then tenderly buried beneath twigs as he travels though the national parkland.

Told in alternating first-person accounts, including that of the elephant, The Tusk That Did the Damage is a tour-de-force of careful plotting, haunting use of detail, and beautifully imagined, competing narrative points of view.

Overall, James tells a disturbing story. The Gravedigger, orphaned by ivory poachers who gruesomely slaughtered his mother, is captured and trained as a traveling show animal. Troubled by fond memories of his mother and the herd, subjected to vicious treatment, and at intervals infuriated by the scent of a popular pineapple pomade that was worn by one of his mother’s killers, he breaks free of his captors and goes rogue, killing humans seemingly at random, but without malice.

Meanwhile, Jayan, the elder son of a poor rice farmer, also takes to poaching, under the worried watch of his brother, Manu, who narrates their sections of the story. These incorporate bright glimpses of daily South Indian life and thumbnail portraits of a half-dozen unforgettable, odd, endearing characters.

The third narrator is Emma, the filmmaker on location with a film-school classmate, Teddy, who begins an affair with the preserve’s chief veterinarian. Meanwhile, recidivist poaching, a corruption scandal, and the Gravedigger’s latest appearance cause a series of crises that leave the rural community and the Western visitors scarred and changed forever.

James is a deeply lyrical writer. Subjects such as cruelty (including animal cruelty) and extinction are daunting to take on, but she deftly circumvents sentimentality by evoking the beauty of her subjects, the mystery of their conflicting drives, and, especially, the ecstasy and sorrow of the death of one of her sweetest characters at the hands of men who are, ironically, trying to save the elephants.

Anne C. Heller is the author of Ayn Rand and the World She Made and the forthcoming biography Hannah Arendt: A Life in Dark Times, to be published in August 2015.

The endless zany situations in this comedic drama will make you want to visit Nantucket at Christmastime (or anytime).