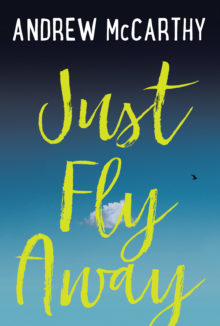 Andrew McCarthy, best known for his role in the ‘80s teen comedy “Pretty in Pink,” added author to his résumé with his New York Times bestselling travel memoir, The Longest Way Home. He’s an accomplished writer, so it was perhaps inevitable he’d eventually tackle fiction. Maybe it was also inevitable that he’d return to his teen-entertainment roots, but we sure are a long way from the 1980s.

In Just Fly Away, 15-year-old Lucy’s worldview is shattered when she learns her father had an affair and has a secret son who’s been living in her own town. While Lucy’s family is determined to move on, she can’t see past her father’s betrayal or the massive lie her parents told. As her anger grows, unanswered questions eat away at her, and she sees her half-brother everywhere she looks.

Both curious and horrified, Lucy’s attempts to adjust only make her feel more isolated. With no one, not even a boyfriend, to understand her feelings, Lucy sets out for her estranged grandfather’s house. With a new window onto her family, its challenges, and its secrets, Lucy gets a little closer to making sense of her world.

Though McCarthy’s writing chops in the nonfiction realm are well established, Just Fly Away seems confused about its audience, and especially the 15-year-old at its center.

Lucy’s voice reads a little off-key. Awkward slang like “ghosting” is dribbled throughout, yet can’t counterbalance Lucy’s “some suches” or musings on her “generation” and “kids of a certain age.”

This disconnect further extends to Lucy as a character. Though she’s the narrator, she feels flat and doesn’t even get a defining trait — such as her sister’s love of showtunes — to fall back on. The best moments are ones in which Lucy is angry, because then she seems to be a real person.

Otherwise, we’re in Lucy’s head, but we don’t get to know her. Sadly, there seems to be nothing to know about her except that her father had an affair and a son, and that she’s now dealing with it.

Despite the emotional situation, very little emotion develops. As the plot progresses, everything hovers at the same muted baseline. From Lucy’s initial learning of her half-brother to her budding romance with her friend’s brother, to her secret trip to her grandfather’s, everything is quiet and unmoving. Lucy’s own feelings are usually described as “I was mad” or “I was happy.”

This isn’t to say we can’t sympathize with Lucy. Anyone would feel disconcerted and betrayed by what happened to her. For a teenager whose one vision of her family is exchanged for another, it’s doubly devastating.

And no one feels as betrayed as her. Her mother has had plenty of time to adjust to this reality; Lucy’s sister appears mostly unaffected by the news; and her father is oddly confused about why Lucy is so angry and keeps waiting for her to get over it.

The plot unfolds with agonizing slowness. It takes more than a hundred pages for Lucy to get on a train to run away, and another 40 for her grandfather to meet her. Though this seems to be what the whole book has been leading up to, we get little time with Lucy’s grandfather. They share some sweet interactions but are quickly waylaid as a tragedy befalls the family.

In an interview with Entertainment Weekly, McCarthy said Just Fly Away was first about a marriage wrecked by a husband’s fling and resulting child before it evolved into Lucy’s story. It’s impossible to say if that version would have been more fulfilling, but he may have had more success writing about adults.

The Girl Without a Name: A Novel

Dr. Zoe Goldman returns to solve the riddle of a Jane Doe’s identity.