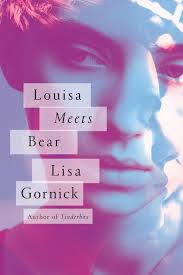 Call a book “chick lit” and you aren’t exactly paying it a compliment. Which is why I’m a little worried Lisa Gornick’s terrific new novel-in-stories, Louisa Meets Bear, might be saddled with that label. Not only are the author and one of the titular characters women, there’s also a female face on the cover.

It’s enough to give a serious reader a case of the vapors.

But this is a seriously engaging book — one filled with fleshed-out, dynamic characters who pass in and out of each other’s lives over the course of decades. Some — like main protagonists Louisa and her on-again, off-again boyfriend, nicknamed Bear — make frequent appearances. Others show up only once or twice but leave an impression no matter how few pages they inhabit.

The sheer size of the cast — which includes Eric, Marnie, Sam, Corinne, Lily, Sarah, Charlotte, Richard, Lena, Cubby, Penny, and Mr. Pryzwawa, to name more than a few — would derail a lesser novelist. Yet Gornick doesn’t just control the palette, she paints each character with unique strokes. This is surely thanks in part to her training as a clinical psychologist. The New York City-based writer has a gift for capturing disparate voices and moods and threading them together into an intelligent, sometimes fraught tapestry.

While the book has a few big, dramatic events — the sudden death of a child; an enraged, knife-wielding teen lunging at her mother — these eventually fade into the chorus; brief, biting notes in an extended symphony.

Instead, it’s the daily stuff of life — the exasperation, the absurdity, the making of the rent — that occupies most of the characters’ attention, just as in the real world. Pivotal moments, recalled years later, soften into memories. They are not the things that shape us; they’re among the things relentlessly smoothing or sharpening us into who we become.

So when Yale undergraduate Lizzy, pregnant after an illicit night with a professor’s husband, carries the baby to term and then gives it up, she is sad but not scarred. When the infant, grown into a 15-year-old named Brianna, trips on the cracks in her world during a Venice vacation, there’s no clichéd denouement with her adoptive parents on the Grand Canal. Instead, there’s a nod to the imperfect love that somehow endures despite the many ways in which we confound and disappoint one another.

And when Louisa, lying in bed with Bear early on, ponders her bond both with him and another man, Andrew, she does so with the recognition that there is no one way things must play out:

Readers will be caught, too, by Gornick’s evocative storytelling skills. While some chapters resonate less than others — I’m lukewarm on an odd vignette about a lonesome widow and a blind surgeon — even these offer a master class in character development.

Her observations, as well, are as clear-eyed as they are piercing. Decades after their initial coming together, Louisa again considers her doomed link with Bear:

“I can see why you came to hate me — I was using you, using you to feel better about myself — and why you had to get away from me. Your love for me left you feeling degraded, and you dug me out of you … like a dog scratching out a tick.”

That wound, like so many others stanched by the passing of years, still hurts. But it no longer bleeds.