This second half of the two-volume biography ably captures the late music man's genius. 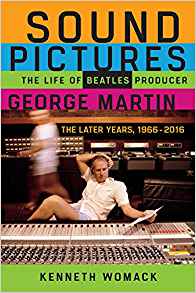 John Lennon quietly strummed his acoustic guitar, demoing a gentle new song for producer George Martin. Paul McCartney watched nervously as he tried to gauge the reaction of a man they still considered something of a schoolmaster in the recording studio.

By the standards of 1966, Lennon was offering a weird song for a pop group. Drawing its lyrical inspiration from The Tibetan Book of the Dead, the music more closely resembled a chant or hymn than a carefully structured song hoping to land atop the Billboard charts.

Lennon finished and looked up warily. “Very interesting, John. Very interesting,” Martin said in measured but supporting tones. The odd little demo became “Tomorrow Never Knows,” the most innovative track on what was to become the Beatles’ best album, Revolver.

Looking back years later, McCartney said, “That was one thing I always gave George Martin great credit for...he was a slightly older man and we were pretty far out, but he didn’t flinch at all when John played [‘Tomorrow Never Knows’] to him...he could have said ‘bloody hell, it’s terrible.’ I think George was always intrigued to see what direction we’d go in.”

The genesis of the fantastic track is one of many telling stories author Kenneth Womack shares in his wonderful second volume covering the later life of Martin, an often and unfairly overlooked figure in Beatles lore. Part historian, part cheerleader, Womack’s herculean work is a more than worthy addition to any self-respecting Beatles fan’s already crowded bookshelf.

He has relatively fewer opportunities to plow pristine ground in Sound Pictures, though, which focuses on a period where archivists like Mark Lewisohn have already painstakingly researched Fab Four activities, such as John receiving “delivery of his psychedelic rolls Royce from J P Fallon Coachworks” on May 25, 1967; or “John and son Julian fly from Heathrow Airport for a holiday in Greece” on July 27 later that year; or manager “Brian Epstein and [mother] Queenie go to the Saville Theatre” on August 23.

Via Martin, though, Womack does find ways to look at the Beatles story from a fresh perspective. While he touches on Martin’s divorce and remarriage, his complex relationship with his parents, his personal integrity, and his caring heart, it’s the Martin at the studio console who’s the primary focus.

Given that Womack’s subject is an innovative music producer, it’s probably inevitable to get bogged down occasionally in wonky recording-tech talk. In some cases (say, the evolution of “Strawberry Fields Forever”), it’s an important and interesting part of the story. However, it can also drag the narrative down a bit when he’s naming one of the oboe players on “When I’m 64.”

It’s a minor quibble; learning about how some of the band’s groundbreaking sounds were crafted is often quite interesting.

Like nearly all books about any member of the Beatles, most pages focus on the Fab years, devoting less time and attention to their work after the group split in 1970. While Womack is no different, he does give ink to some of Martin’s interesting projects in the 70s and beyond with bands including America and Cheap Trick, and solo guitarist Jeff Beck.

As Martin would be the first to admit, his time with the Beatles was a life-defining opportunity never to be equaled. Humble, talented, patient, and kind, the Beatles were lucky to have met George Martin. And in Sound Pictures, we’re lucky to be well served by biographer Kenneth Womack, who skillfully turns the spotlight on a man confident enough in his own talents to rarely steal attention from the artists he so ably served.

Michael Causey is one of America’s loudest Beatles nerds and co-hosts Get Up!, a radio program on WOWD 94.3 FM, where he plays a lot of music by the Fab Four.

Around the World in 80 Words: A Journey Through the English Language