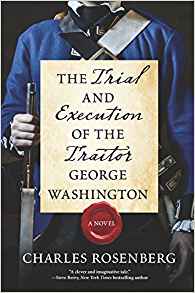 While today’s cable news pundits debate whether a sitting president can be indicted, author Charles Rosenberg plays an older political parlor game, “What if?” in his slow- moving yet ultimately entertaining new novel, The Trial and Execution of the Traitor George Washington.

Ruminating on the answers to questions about alternate history is often as tragic as it is intriguing. What if the United States had thrown its support behind Ho Chi Minh’s effort to win control of Vietnam after the French defeat in 1954? What if Bobby Kennedy had not taken that detour through the kitchen at the Ambassador Hotel the night of the 1968 California primary?

And here, Rosenberg’s “What if” asks a particularly unsettling question: What if the British had captured the father of our country and stopped the American Revolution in its tracks?

The premise of the book is that George Washington was not only the hero of the war of independence, but the soul of the entire adventure, without whom it could not succeed. To insure it does not, first minister of Great Britain, Frederick, Lord North, without the knowledge of King George III, conscripts a British Army colonel to hook up with loyalists, ambush His Excellency (as G.W. is known to his followers) at his New Jersey headquarters, and whisk him back to the mother country.

The American Revolution is starting to cost the Crown too much financially and politically. North’s endgame is to use the strapping, charismatic Washington as a bargaining chip to get the unruly rebels to lay down their arms in exchange for colonial representation in Parliament and forgiveness by the British of that pesky American tax bill.

Unfortunately, neither Washington nor the king is on board. Washington wants no part of negotiations if American independence is not on the table, and the king would prefer to make an example of the traitorous Washington. He wants the general indicted for treason, convicted in a court of law, and executed by a public hanging in which the future father of our country would be cut down before death, then drawn, quartered, and beheaded.

Ever brave, the imprisoned Washington responds like a man when his lawyer tells him of his probable gruesome fate. He doesn’t flinch. Not even when he learns his head could be left to rot on a spike in the middle of London for years.

“If it will secure the independence of my country, they may put my head where they please,” he says.

In fact, the image of Washington is somewhat far-fetched in this book. The author paints him in such mythical, godlike colors that the reader half expects to find Washington in the prison yard at Tower of London with an axe in his hand and a felled cherry tree behind him, prepared to present the truth about its demise to the warden.

While awaiting the inevitable in prison, Washington gets the VIP treatment. The door to his cell is kept open at night, and he wanders where he pleases. His jailors respectfully refer to him by his military title, and his old Army pals from the French and Indian War stop by with gifts of elegant china from which he is served coffee on demand.

His biggest concerns while he’s in the can appear to be whether he will be permitted to make a rousing pro-independence speech on the gallows and whether his old London haberdasher will come to the Tower to fit him with a couple of new uniforms. Although, as readers will eventually find out, his excellency is not known as a brilliant military strategist for nothing and has a few deft moves under those new sleeves.

It is hard to spoil the ending of a book with the words “the Trial and Execution” in the title, and in that regard, the novel is something of a bait-and-switch. The trial doesn’t open until some 300 pages into the story and lasts a mere 40 pages. But there is a nice surprise witness to General Washington’s alleged treason, and the courtroom scenes — given Rosenberg is a graduate of Harvard Law School, a law professor, and a one-time TV analyst for the O.J. Simpson murder trial — have the ring of authenticity.

There are some 3,000 or more books about George Washington on the shelves of the New York Public Library, and being familiar with any of them is not a prerequisite for enjoying this one. The author kindly includes a cheat-sheet at the end of the novel giving the casual student of Revolutionary history a CliffsNotes’ version of the war and its major players.

There is historical accuracy to the aspect of the novel dealing with Lord North’s anxiety over the heavy toll the protracted war exacted on the coffers and ideals of the British Empire. Similarly, the book addresses the tension between the monarchy, which, by the late 18th century, was considerably diminished in power, and the Parliament, which made laws in his name that the king had little choice but to carry out.

In fact, the most compelling aspects of this fictionalized history center around the very real politics of the time and place, as exemplified in the back-channel conversations at 10 Downing Street between North and American ambassador Ethan Abbott, sent to London with instructions from the Continental Congress to promise the British anything but get General Washington home alive.

In these, poor North comes across as a hapless character who has foolishly backed himself into a corner. He had hoped that the kidnapping of Washington would result in Benjamin Franklin coming from France to spearhead a diplomatic solution to the battlefield stalemate. Instead, the Americans send their B-Team of negotiators, who have other, more dramatic ideas in mind.

Diane Kiesel is a judge of the Supreme Court of New York. A former journalist, she is the author of Domestic Violence: Law Policy and Practice, published in 2017 by the Carolina Academic Press, and She Can Bring Us Home: Dr. Dorothy Boulding Ferebee, Civil Rights Pioneer, published in 2015 by the University of Nebraska Press/Potomac Book imprint.