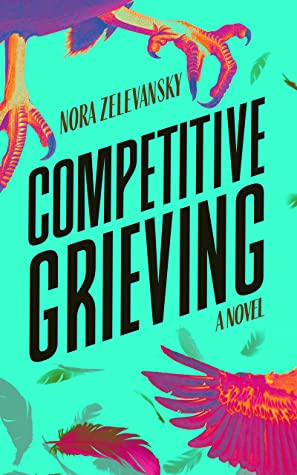 Wren Pinkus, the protagonist of Nora Zelevansky’s third novel, Competitive Grieving, is struggling after the sudden death of her oldest friend, Stewart. A charismatic actor who served as Wren’s greatest motivator, as well as her harshest (if fairest) critic, Stewart has been Wren’s lodestar for as long as she can remember. Now that he’s gone, she’s left floundering — and, worse, unintentionally competing with the sycophants, narcissists, and gossipmongers who call themselves his friends when she is designated the person best able to sort through his belongings.

To cope with her anxiety, Wren takes to planning the hypothetical deaths, funeral arrangements, and memorial buffets of everyone around her, from her best friend, Gretchen (old age; cremation; vodka martinis), to her philanthropic boss, Anton (rock-climbing accident; tribal burning; chocolate-chip pancakes from IHOP), and a particularly calamity-prone former classmate (freak accident; burial; potluck).

Despite — or perhaps because of — the speculative nature of this exercise, it helps Wren feel she is exerting a measure of control over an intolerable situation.

It would seem Zelevansky has all the right elements for a heartwarming narrative about how loss and grief transform us and, if we let them, open us up to new possibilities and connections. Unfortunately, these elements largely fail to coalesce into a whole, leaving readers unclear on Wren’s motivations and confused about the book’s message.

One of the most inconsistent aspects of the novel is Wren’s approach to grief. It’s jarring when, upon entering the chapel for Stewart’s funeral, she reflects with almost clinical detachment:

“Despite my flight instinct, I reminded myself that the communal ritual was a chance for catharsis created to help mourners take their first shaky steps forward.”

Though I haven’t endured the passing of a best friend, I’ve certainly suffered loss, and I can’t ever recall feeling as clear-headed, emotionless, and analytical about it as Wren seems to be.

Everyone grieves differently, of course, and if this inconsistency were the book’s sole weakness, it would be negligible. Instead, it’s part of a larger pattern of baffling behavior on many characters’ parts. Even if Stewart’s acquaintances are as horrible as Wren perceives them to be, for example, their shameless aggression sometimes feels so blatant as to be far-fetched.

Is it plausible that Blair, the late actor’s publicist, would tear down police tape and let herself into his sealed apartment in order to secure access to his most prized possessions — despite knowing Stewart’s mother has assigned the task explicitly to Wren and Stewart’s lawyer, George? Or that George, upon discovering this transgression, would passively assume his newly diminished role rather than insist on following legal protocol?

Are “best friend” Gretchen’s actions — she disappears for most of the narrative, only to pop back in, try briefly to justify herself, and then beg forgiveness the way a middle-schooler might (“I know. I’m so sorry. Seriously. I suck. I love you.”) — truly those of someone who cares deeply about Wren?

A central part of Wren’s journey involves her thorny interactions with the “vultures,” her name for the hangers-on she feels are manipulating and commodifying Stewart’s death into something that shows the grievers in their best light. It makes sense that the author would portray them unflatteringly at first — all the better to highlight Wren’s turnaround when she learns to empathize with them later.

When it comes, the turnaround is anything but illuminating. Challenged by Blair to see the vultures’ friendships with Stewart more charitably — “We didn’t just rely on him for those acts of kindness. We relied on him to believe in us. When no one else did. That was his true gift.” — Wren appears to make a genuine effort to be more tolerant. Yet there are two problems with this.

First, the vultures don’t come across as terribly redeemable; it’s hard to believe she would want to cultivate relationships with them. And second, in minor but noticeable moments throughout the story, Wren reveals herself to be negative and snarky. At one point, she watches “a female jogger lope by, apparently concerned enough about her BMI to run in a storm.” I’m not sure where the author came by the idea that one must be worried about weight to run in bad weather; many joggers simply prefer overcast skies to sunny ones.

Later, when meeting with an emotionally fragile young woman who knew Stewart through a counseling program, Wren silently critiques the woman’s reference to a longstanding therapist: “Old therapist? Like she’d been around for a while? As far as I could tell, she was doing a bang-up job.”

This is an especially unkind take from someone who has just endured trauma. Surely, Wren knows that life, which often doesn’t conduct itself according to plan, gives people ample reason for seeking help. In light of such flippant commentary, her pledge to be more openminded around the vultures rings hollow.

Still, there are moments of fleeting levity and romance interspersed throughout Competitive Grieving, and they serve as welcome distractions. Overall, however, the book’s mixed messages remain its most identifiable quality.