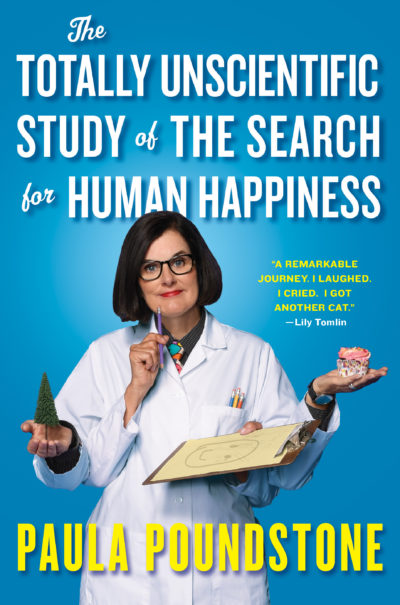 Think how unhappy we would be if happiness were so easy to find. Would the classic romantic comedy formula of boy meets girl, boy loses girl, boy gets girl back ever have been so popular? Would the Pharrell Williams song “Happy” ever have been a hit? And would Paula Poundstone ever have graced us with her new book, The Totally Unscientific Study of the Search for Human Happiness?

Poundstone, the longtime stand-up comic and frequent panelist on NPR’s weekly comedy quiz “Wait Wait…Don’t Tell Me!” is certainly well qualified to go on this search. Not only did she have to rebuild her personal life, but she also had to rebuild her career following legal troubles and a six-month stint in rehab for alcoholism in 2001.

The experiments may be unscientific, but each chapter is filled with terms — like quantitative and qualitative — that make Poundstone sound like she has a Ph.D. in scientific humor. Additional scientific terms range from field notes, analysis, and procedure to variables, environment, and conclusion.

Poundstone begins her book with the “Get Fit” experiment, which ostensibly centers around her effort to get physically fit by taking taekwondo lessons. One of her first qualitative observations is that “the door to the taekwondo studio seemed much heavier on the way out.”

But we learn quite a bit more in the book’s first chapter. Poundstone introduces us to her three adopted children: Toshia, who has cerebral palsy, Alley, and Thomas E. In fact, throughout the book, Poundstone speaks lovingly of their achievements, foibles, and tolerance of her.

For instance, during her “Get Earthy” experiment, Poundstone quips that she thinks “sometimes I’m annoying to Toshia.” In the experiment, Poundstone takes her daughter on a backpacking trip in the Angeles National Forest, though everyone she discusses it with thinks she’s nuts, no doubt because of Toshia’s physical challenges.

Of course, they survive. And we even find out that “after you pee like a man, you don’t ask for directions.”

Other experiments in The Totally Unscientific Study of the Search for Human Happiness may not involve as much exercise, but they offer plenty of opportunities for Poundstone to stretch her comedic view of herself and the world.

Consider the “Get Warm and Fuzzy” experiment. Poundstone says she’s longing for real connection, so she goes in search of hugs — without having read anything about the “etiquette of hugging.” One of the first observations she makes before taking a flight with her son Thomas E. is that “TSA agents don’t like hugging.” In today’s world, Poundstone is fortunate she doesn’t face even more legal trouble.

Poundstone tries another method of transportation during her “Get Rolling” experiment. She rents a Lamborghini, despite admitting she’s thousands of dollars in debt. Why? Toshia gets an apartment and Alley leaves for college in Oregon and Poundstone needs to do something drastic to find happiness.

Driving down Sunset Boulevard in Beverly Hills with the top down provokes a few words that are unprintable in this review. If that isn’t enough, Poundstone discovers that “rich people must not have a lot of cats. There’s hardly any trunk space in a Lamborghini.” The discovery follows a trip to the grocery store for cat food.

Speaking of cats, Poundstone claims to have more than a dozen. And they’re featured in the “Get Purring” experiment. Poundstone says they’d be even more lovable “if they stood in one place when they threw up.” That’s the bad news. She also believes the cats give her home a “kind of comedic baseline.” And that’s good news for us.

Give Poundstone credit, as well. She’s not afraid to dive feet-first into her experiments. Take the “Get Up and Dance” chapter, where she tries swing dancing. Even though she claims to feel like an idiot a lot, she concludes that dance lessons provide her with “several heps of happiness.” Let’s hope, as promised, she plans to continue.

Poundstone’s happiness journey finds her trying to get organized — twice. The second time around, she hires a professional organizer to help her get rid of stuff. (Spoiler alert: It’s not easy.) Poundstone also volunteers at a nursing home with her dog, who turns out to be a rock star.

It’s not all positive.

“If Sir Isaac Newton had employed a computer,” Poundstone says, “he would never have noticed apples falling, and we’d still be wondering why we can’t jump higher.”

So, what ultimately makes Poundstone happy?

Without giving away too much of her secret for finding a few “heps” and “balous,” it requires just one thing: engagement. And luckily, as she says, “No dolphins were harmed in the process.”

Thank goodness. Because that gives us a chance to laugh without feeling guilty.