The American Spirit: Who We Are and What We Stand For

In this collection of speeches, the famed historian reflects on what his countrymen are made of. 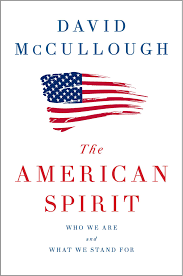 Twelve presidents ago, David McCullough made his first visit to Washington, DC — at the age of 15. He gazed up into the Capitol Rotunda with reverence and imagined the myriad conversations that might have happened there.

It was 1948. Harry Truman had ramped up the Marshall Plan in Europe; Israel was declared a new state; the armed forces were desegregated; a Soviet blockade of Berlin was spurned; and the president unexpectedly defeated New York governor Thomas Dewey in the November election.

Despite the heady headlines, the public was optimistic and generally cognizant of its history.

McCullough’s new book, The American Spirit: Who We Are and What We Stand For, is a compendium of 15 speeches delivered at college and university graduations, to Congress, and at the White House between 1989 and 2016.

In the 69 years since that introductory junket, the author has remained a proud patriot, but now his “voice” of reminiscence is tinged with circumspection. Americans have disassociated from their past, disengaged from history, downgraded cultural standards, and dumped the study of literary luminaries such as Flannery O’Connor, Willa Cather, Ralph Waldo Emerson, and Langston Hughes.

“Let’s do something about public education. Let’s stop the mindless destruction of historic America…let’s clean up our language — private and public…Let’s stop the dumbing and degrading and cheap commercial exploitation of American life…please…cure the verbal virus that seems increasingly rampant among your generation. I’m talking about the relentless, wearisome use of words ‘like’ and ‘you know’ and ‘awesome’ and ‘actually’…[Imagine] if in his Inaugural Address, John F. Kennedy had said, ‘Ask not what your country can, you know, do for you, but what you can, like, do for your country actually.’”

Two centuries ago, John Adams — the president McCullough “retrieved” from resolute historic obscurity with the publication of an enormously popular biography — had written to his wife, Abigail, about the education of their son, John Quincy: “The boy should read history. We must all read history, and write and publish and teach history better.”

Although much of Adams’ vision for education has been diluted through the decades, McCullough, in a partial emulation, advises: “By all means read history. We are all where we are, each of us, because others helped…Read books. Try to understand the reason why things happen, why they are as they are…Sometimes, somewhere along the line, memorize a poem…and sometime, somewhere along the line, do something for your country.”

Many milestones — from the heroic to the horrible — have been washed into obscurity. The faces of the Founding Fathers are now indistinguishable to most. Surveys show that 23 percent of the nation’s fourth-graders realize George Washington was the first president, but only 9 percent can identify a photograph of Abraham Lincoln. Twelve percent of the nation’s high-school students are considered proficient in American history, while 10 percent of college graduates believe “Judge Judy” is a member of the Supreme Court.

A recent analysis by the Department of Education also disclosed that one-third of all Americans with a college education had not — in a 12-month period — read a single novel, short story, or poem.

The fixation with technological devices, a swerve from the humanities to “STEM” (science, technology, engineering, and mathematics), large numbers of unqualified or disinterested teachers, and financial curtailments in education have dusted up a matrix with a potentially dangerous destiny, says McCullough:

“[W]e are raising a generation of young Americans who are by and large historically illiterate. Innumerable studies have been made and there’s no denying it. I’ve experienced it myself again and again. I had a young woman come up to me after a talk I had given at a college in Missouri to thank me for coming…because, she said, ‘until now I never understood that the original thirteen colonies were all on the East Coast.’”

While teaching an Ivy League seminar to 25 seniors — all honor students majoring in history — McCullough queried, “How many of you know who George C. Marshall was?” Not one. There was a long silence. Finally, one young man asked, ‘Did he maybe have something to do with the Marshall Plan?’ And I said yes, he certainly did, and that was a good way to begin talking.”

One possible antidote to the nation’s historic illiteracy? “Read. Read, read! Read the classics of American literature…you’ve never opened. Read your country’s history. How can we profess to love our country and take no interest in its history? Read into the history of Greece and Rome… of science…medicine…ideas. Read for pleasure to be sure. I adore a good thriller or a first-rate murder mystery. But take seriously — read closely — books that have stood the test of time. Study a masterpiece, take it apart, study its architecture…and after a few years, go back and read it again.”

And, in “Knowing Who We Are,” McCullough endorses improving the ways in which teachers should be trained: harness them with enthusiasm that can be passed to their students; depend less on textbooks — they tend to be boring or political; press the importance of history at home; and visit historic sites.

Barbara Tuchman, the Pulitzer Prize winning-author of The Guns of August, surmised the secret to making history interesting was to “tell stories.” E.M. Forster avowed that the magic came from stirring up empathy, and the measured Abigail Adams, aghast to learn that her Harvard-bound son, John Quincy — parentally primed for position and power — had gotten a swollen head, rebuked him in a prickly post:

“If you are conscious…that you possess more knowledge upon some subjects than others of your standing, reflect…you have had greater opportunities of seeing the world…you have never wanted a book, but it has been supplied…your whole time has been spent in the company of men of literature and science. How unpardonable would it have been in you to have turned out a blockhead.”

David Bruce Smith is the author of 11 books, including the children’s biography American Hero: John Marshall, Chief Justice of the United States. He is the founder of The Grateful American Foundation, which is celebrating its fourth year of restoring enthusiasm about American history for kids — and adults — through videos, podcasts, and interactive activities, and The Grateful American™ Book Prize for excellence in children’s historical fiction and nonfiction focused on the United States since the country’s founding.

In this real-life thriller, a reporter follows the trail of a remarkable deceiver.