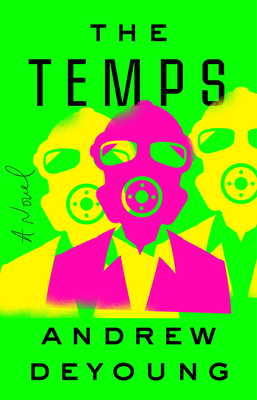 At the end of Andrew DeYoung’s sometimes compelling The Temps, I wasn’t saddened in reflection on the stark world he imagines. Nor did his themes lead me to ruminate on technology’s — or man’s — limitless ability to cause harm. Instead, the lingering question hovering over this narrative of a Silicon Valley megalomaniac set upon improving the world was this: Could a high-heeled shoe, wielded by a mousy secretary weakened by poison gas, actually deal a death blow to a colleague transformed into a rapacious killing machine?

This is not to pick nits with The Temps, but it does speak to a broader problem authors often encounter with novels that accelerate toward a satisfying conclusion only to reveal gaping chasms in the plot that must be patched quickly if not plausibly. Enter the improbable stiletto used to fill a pothole on the road to denouement.

Readers’ suspension of disbelief is further eroded by scenes such as the one in which two male co-workers — both hale and hardy; one a key character — somehow can’t dispatch a former colleague (similar to the killing machine referenced above) despite collapsing most of the latter’s skull with blows from a frying pan. If only they’d had access to footwear instead of cookware.

Over-the-top episodes aside, The Temps aspires to be much more than a beach read. Early on, there are the stirrings of a modern-era Lord of the Flies as the temporary employees at Delphi (a sprawling, Google-like complex complete with restaurants and sand volleyball courts) are left to fend for themselves after most of the fulltime workforce is killed by a toxic gas released during an outdoor meeting.

The same gas snuffs out millions worldwide, including the loved ones of Delphi’s surviving temps. The temps themselves have been saved by their building’s special ventilation system. In another stroke of good fortune, at least one onsite Starbucks remains up and running. But as millennial Jacob, who started his temp gig that very morning, soon realizes, many of his generation are ill-equipped for dystopia:

“The lie of a liberal arts education was that knowledge mattered, that the ability to be a thoughtful citizen of the world was worth a single solitary fuck. What was the point, when all it took was a yellow cloud to set civilization crumbling?”

In fairness to Classics majors, this wasn’t any yellow cloud; it transforms humans into mythological furies (as one temp describes them) bent on dismembering anyone or anything in their paths. Even the Oracle of Delphi couldn’t have seen this one coming. Probably.

DeYoung’s concept of a world left to twentysomethings either not smart enough to get “real” jobs or bold enough to follow their passions is fertile ground for satire, and there are certainly jabs at this generation — as well as at a corporate culture arrogant enough to believe it can unilaterally change the world. And it’s intriguing to imagine how one might survive in a new reality with only a limited number of Frappuccinos.

Yet the sardonic opportunities are often sacrificed in an apparent attempt to get The Temps shelved in the thriller section of the bookstore. That means stereotypically pasty worker bees are suddenly imbued with ludicrous kick-ass abilities. And that, as Chekhov famously noted, a gun which cannot be found by 350 hapless part-timers in the first act must magically appear in the hands of a systems analyst and go off in the third.

The Temps might have worked either as a satire or a thriller, and there are moments when the author pulls off a delicate balancing act between both. Unfortunately, there are far more instances where, like someone trying to escape society’s collapse while wearing high heels, the story wobbles and falls flat.