We Are Pirates: A Novel 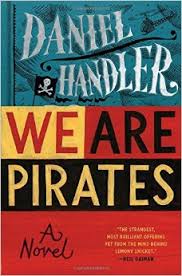 Daniel Handler’s new novel, We Are Pirates, is both.

The book deals in both literal and metaphorical piracy. Phil Needle is a struggling radio producer who is obsessed with the “American outlaw spirit.” He takes off on a desperate trip to LA to pitch his latest story about an American blues singer from the 1930s. Needle might idolize the renegade spirit because he possesses so little of it himself; the trip is a series of small defeats in ordinary situations.

(There’s an especially funny vignette of Needle’s hapless search for a new assistant, his first having resigned because the “job is not meeting [her] needs.” Needle, flummoxed by the idea that his assistant — or anyone — might have an inner life, hilariously ponders the statement throughout the book.)

Gwen, Phil’s 14-year-old daughter, embraces the outlaw ethos more literally. The reader meets Gwen during her first experiment with shoplifting. She’s promptly caught. “She had never thought the idea of getting caught was even possible, back when she pushed the door into the store. Ten minutes ago. Now there was nothing else but getting caught.”

Gwen is punished with regular visits to a nursing home, where senile resident Errol has a fictitious navy career and a bookshelf full of pirate stories. Gwen, Errol, and a few friends, all ignored and psychologically cornered, come to the conclusion that modern-day piracy really is an option. “Now there was movement, and it was all because there was no one there to say it could not be so,” Handler writes as their adventure begins.

The story is especially good at capturing the way even the most audacious actions can fizzle out. You finally take a step that you think will change your world, and an endless series of obstacles appears. Your hope and faith slowly seep away, but your leap was so wild and undoable that you’re forced to plow ahead anyway.

Handler seems to be saying that you just end up back where you started, still stuck, and that the place you thought you’d gone to “either wasn’t something yet or had stopped being whatever it was some time ago.”

We Are Pirates contains a few missteps. In A Series of Unfortunate Events — penned by Handler’s fictional alter-ego, Lemony Snicket — there is a charming narrator on the fringes of the action who steps in to define unfamiliar terms for the book’s young readers: “The word ‘briskly’ here means ‘quickly,’ so as to get the Baudelaire children to leave the house.”

He uses a similar device in We Are Pirates: a narrator who occasionally offers explanations of the modern world. After a cellphone call between two people in adjacent hotel rooms, for example, the narrator interrupts to say that “at this time in our history, satellites in outer space were often used this way, to connect people who were almost within touching distance on earth.”

The observations can be funny, but it’s not clear whom the narrator is addressing. Humans in some dystopian future that doesn’t include satellites? Aliens? The book would be stronger without these intrusions.

Handler proves that he can write sensitively about the life of a teenage girl. Gwen suffers a betrayal by a friend, is humiliated when the object of her first crush teases her, and is peer-pressured into giving up the sport she loves. When it comes to her sexuality, though, he oversteps into vulgarity more than once.

It’s unnecessary to have Gwen accidentally shoplift a copy of the pornographic magazine Schoolgirls, “with girls too old for school dressed up in plaid skirts and terrible pigtails, with their legs open and lollipops in their mouths. You could see their cunts even on the cover.” Why add such a random dirty-old-man element to the book? Maybe Handler is eager to remind readers that, despite a young protagonist, this novel is meant for adults.

Whatever his thinking, We Are Pirates is, overall, darkly funny, original, and occasionally beautiful. It’s worth reading, and that’s an achievement for any writer.