The Story I Am 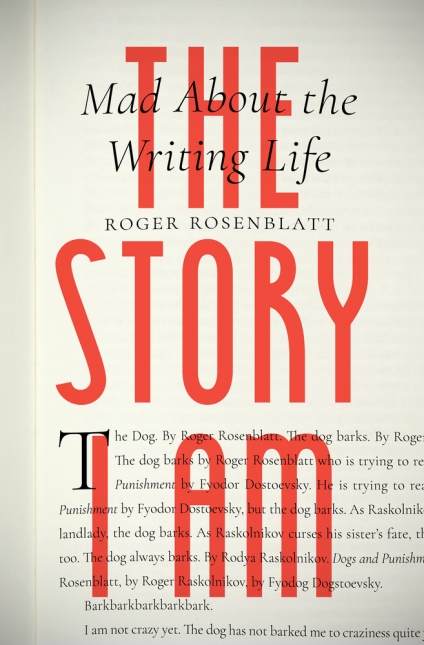 If the definition of wunderkind is to teach writing at Harvard at the age of 25, meet Roger Rosenblatt. He decided when he was “almost three years old” that he wanted to be a writer, and he promptly ascended into the literary stratosphere, earning a Ph.D. in literature and writing short stories, essays, articles, speeches, plays, books, and poetry.

He was a columnist for the Washington Post, editor of U.S. News, literary editor of the New Republic, and director of education for the National Endowment for the Humanities. For three decades, he wrote essays for TIME, including a cover essay, “A Letter to the Year 2086,” chosen for the time capsule placed inside the Statue of Liberty at its centennial. His essays for the PBS NewsHour won two George Polk Awards, one Peabody, and an Emmy.

Now, at 80, Rosenblatt has written his 20th book from his lofty perch as distinguished professor of English and writing at Stony Brook University.

As you can see from the cover, the title confuses. Big red letters blare “THE STORY I AM,” while smaller black ones murmur, “Mad About the Writing Life.” Be assured that both are appropriate. Rosenblatt has culled from his previously published oeuvre to write this book, proving that he’s indeed “mad about the writing life,” particularly his own, which more than validates the big red “I” — because the story is all about him and his passion.

Rosenblatt is not a man stooped by modesty. He writes of his trip to Dublin to study with Frank O’Connor, the great Irish short-story writer who idolized William Butler Yeats. O’Connor, also unencumbered by insecurity, spoke often of his relationship with Yeats, always putting himself on the same high rung. Rosenblatt writes: “I shall never forget the day he told me, ‘Roger, you are the best writer since me and Yeats.’ Such a wise man, O’Connor.”

In addition to O’Connor, Rosenblatt name-drops E.L. Doctorow, Alex Haley, and James Salter, all once blessed to be in his circle, while he archly dismisses William Strunk and E.B. White, saying their Elements of Style is a “mere grammar guide” hardly worth reading.

Just when you’re tempted to throw Rosenblatt’s book into the bin marked Egoistic Excess, you land on words that expand your heart: “Until my daughter, Amy, died, I had always believed that good things would simply befall me…I’d led a charmed life but then…”

Ten years ago, the wunderkind and his wife were walloped by the worst that can befall parents, forced to bury their 38-year-old daughter, a pediatrician, whose sudden death left behind a husband and three young children. Without hesitation, the 70-year-old grandparents moved in to help their surviving family.

Rosenblatt does not believe in God, so he could not derive comfort from religious faith. In fact, he states, “My anger at God remains unabated.” Instead, he writes to keep his daughter alive, to keep death at bay, to make life endurable:

“As a young writer, I was the dandiest cleverest wit and wise guy — a cinch if one possesses the meager gifts. But…after witnessing enough pain and plain courage in the world, I simply reversed course and started writing about the life before my eyes.”

He’s borrowed well from a lifetime of learning and sprinkles his prose with the poetry of Roethke and Stevens and Wordsworth. Occasionally, he waves his own wand to hyphenate words most effectively: “The Spaldeen-moon hangs low”; “turrets that look like witch-hat tops”; “day hook-slides into night.”

He believes that all writing is essay writing, “an endless attempt at finding beauty in horror, nobility in want — an effort to punish, reward and love all things human that naturally resist punishments, rewards and love.”

As a writer, Rosenblatt feels he’s improved because of his daughter’s death:

“My work is sharper now, and more careful. Happily would I trade all the books I’ve written…for one moment with my daughter Amy alive, but since that bargain is impossible, I write to fill the void her death created.”

Rosenblatt shares his creativity with his graduate students, once giving each a flower and instructing them to write a one-page essay about what it smelled like. “Follow your nose,” he told them. “You will plunder the past to explain the present and make the present more intense.”

This book of writing fragments — some chapters are a page, others a paragraph — is not to be read for instruction. Rather, it’s a hymn of praise for the craft of weaving words in order to survive, which Roger Rosenblatt sings to himself with style and grace.

How the West Stole Democracy from the Arabs