Freud’s Trip to Orvieto: The Great Doctor’s Unresolved Confrontation with Antisemitism, Death, and Homoeroticism; His Passion for Paintings; and the Writer in His Footsteps 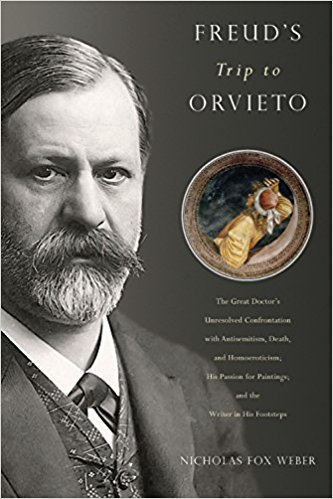 “If anyone forgets a proper name which is familiar to him normally or if, in spite of all his efforts, he finds it difficult to keep it in mind, it is plausible to suppose that he has something against the person who bears the name so that he prefers not to think of him.” So stated Sigmund Freud in a 1917 lecture.

And he should know: In his seminal book, The Psychopathology of Everyday Life, Freud recounted how he forgot the name of the Renaissance artist who created what he deemed the finest frescoes he had ever seen.

It was 1897, and he was traveling through Orvieto, Italy, where he viewed The Last Judgement, a cycle by painter Luca Signorelli. But as much as he admired those paintings, when telling a companion about his travels a year later, he couldn’t recall the artist’s name. This forgetting or repressing — what Freud called a “parapraxis” — was a major tenet of his psychoanalytic theory.

Why had he experienced it with this particular artist and these particular paintings?

This is the question that Nicholas Fox Weber sets out to answer in Freud’s Trip to Orvieto. As an art historian and patient who underwent psychoanalytic therapy, Weber’s experience dovetails with this incident in Freud’s life.

Indeed, the story becomes a meditation by Weber on his own repressions, desires, and emotional issues — almost an extension of his psychotherapy at times. But the book is at its strongest when Weber analyzes those powerful and moving frescoes from the early 16th century.

Weber begins with biographical information about Freud and stories of his own youth in a well-heeled Connecticut suburb. Later in life, he happens upon an obscure article written by family friends that discusses Freud’s parapraxis, and it inspires Weber to explore why Freud forgot Signorelli’s name.

His family friends posited in their article that Freud repressed Signorelli’s name because of his shame at being Jewish, which was inflamed by images of a Jewish antichrist in the frescoes. Also factoring in were Freud’s issues with his father, who capitulated when publicly harassed by an anti-Semite, an incident that haunted Freud throughout his life.

Weber’s excellent eye distinguishes colors, shading, anatomical details, and emotional expressions in the tortured figures being cast into hell and tormented by demons in the frescoes. It seems entirely credible from his explanations that Freud, a man so concerned with repressed sexual urges, might have repressed his own enjoyment of graphic male nudity. As Weber explains, “He needed to forget the name Signorelli in order to forget the Sigmund who liked those things.”

Comparisons of Signorelli to other Renaissance painters, such as Raphael and Holbein, provide rich context for Signorelli’s work, which is generally obscured by other Italian artists, including his protégé, Michelangelo.

Weber’s archival research — Signorelli’s contract to paint the Orvieto cathedral, Giorgio Vasari’s contemporary account of Signorelli’s life — illustrate the artist’s milieu and talent. Here is where we experience Weber’s obvious love for and knowledge of visual art, and it is where the book moves most elegantly.

Less moving are his ruminations on his childhood, his father, and the woman who inspired a passionate sexual awakening in his teens. Weber is admirably self-aware, and some of his anecdotes are touching remembrances of his father, while others are thought-provoking vignettes on how Jewish people cope with anti-Semitism in modern society.

But Freudian theory and psychoanalysis are like falling into a funhouse full of mirrors. What are you really seeing? Is it repressed homoerotic impulses? The Oedipus complex? Some type of inadequacy that your mind is repressing? In this funhouse, not only do you see distorted images of yourself, the reader, in those mirrors, but Weber, Freud, and both of their fathers, not to mention various domineering women from their lives.

At times, Weber’s faith in psychoanalysis seems quaint, like a midcentury relic. The rise of cognitive behavioral therapy makes it difficult to put much stock in Freudian psychoanalysis these days, but am I just saying that because psychoanalysis brings up uncomfortable thoughts in me? Am I repressing by rejecting this method? In the chapters on psychoanalysis, it’s impossible to know what is real.

Weber should stick to art history and criticism, for this is where he has the most to share with readers. His vivid analysis brings faraway frescoes and lesser-known paintings into vigorous reality, and his idea that Freud suppressed Signorelli’s name because of his reaction to the work’s homoeroticism makes perfect sense when you explore the paintings with him.

Weber’s expertise in art informs an insightful analysis of a little-known event in Freud’s life, and this book is at its best when he ties these threads together.

The Triumph of Christianity