The Facemaker: A Visionary Surgeon’s Battle to Mend the Disfigured Soldiers of World War I

An affecting yet disorderly account of a pioneering doctor’s life-changing work. 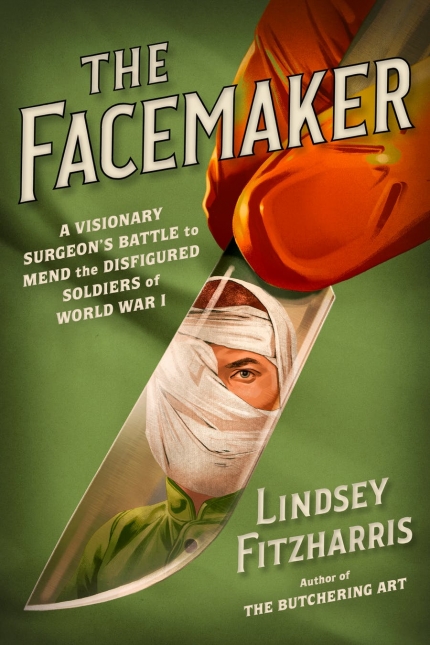 As heartbreaking stories emerge daily from Russia’s invasion of Ukraine, it’s difficult to imagine anything uplifting coming from any war ever. But author Lindsey Fitzharris reveals hope in the carnage of a long-ago conflict in The Facemaker, her momentous account of a diligent and gifted surgeon who restored the shattered faces of young, mostly British soldiers shipped into hideous World War I battles.

Learning what golfer-cum-doctor Harold Gillies was able to achieve in a specialty hospital he practically begged England to build will be an eye-opener for those under the impression that plastic surgery is some sort of recent magic crafted solely for the Hollywood set eager to cheat Father Time.

The advanced artillery, flamethrowers, and chemical weapons of trench warfare from 1914-1918 left thousands of soldiers horribly maimed. Yet instead of turning away in revulsion when encountering these “unlovely objects,” Gillies rolled up his sleeves and advanced the nascent field of facial surgery by reconstructing noses, jaws, eyelids, lips, foreheads, cheeks, and palates.

No doubt the Oxford-educated Gillies, a native of New Zealand, was a medical star. Yes, competition with his peers mattered, but it was his devotion to each patient’s wholeness that allowed him to shine. His realization about the impact physical appearance has on a person’s psyche freed him to adopt a comforting manner verbalized in his signature phrase:

“Don’t worry, sonny. You’ll be all right and have as good as face as most of us before we’re finished with you.”

Gillies’ tender efforts to create a healing atmosphere included banning mirrors from his hospital and devising ingenious ways to nourish patients too compromised to swallow solid food. He fretted after unintentionally botching a procedure and cried when patients died.

It’s fascinating to learn how Gillies bucked tradition by fashioning hand-picked teams of nurses, doctors, dentists, and radiologists to complement his surgical skills. Such progressive thinking led him also to recruit artists and photographers to his enterprise, as he was wise enough to acknowledge that his craft was a blend of science and art. Indeed, the pictorial documentation of each operation served to standardize methods and helped to legitimize plastic surgery.

Detailed explanations about the evolution of skin grafts, flaps, and the development of techniques such as tubed pedicules make it clear Fitzharris did her homework. Yet even though the story she weaves is compelling, its structure is somewhat confusing. It’s ironic that a book about early plastic surgery could’ve used some nipping, tucking, and rearranging to streamline its flow.

Too many times, paragraphs surely intended to be brief backgrounders about newly introduced topics read like lengthy Wikipedia entries, plunging readers down unwelcome rabbit holes. These detours distract from the story the author promised to tell — an intimate account of the struggles of Gillies’ team and the traumatized soldiers they mended.

Jarringly, the reader is left hanging for 172 pages before again encountering the plight of Percy Clare, an English private whose devastating injuries are featured in a gripping battle tale in the book’s prologue. Another quibble is the overuse of “unsurprisingly” and an over-reliance on dreadful cliches such as “weighing heavily” and “road to recovery.”

And it’s disappointing that the epilogue was treated as a catch-all for the author’s research leftovers because it makes for a disjointed read. Buried within it are tantalizing revelations better suited for existing or new chapters.

For example, there’s a delightful nugget about Gillies’ awakening when, after the war, he expanded his practice to include what he called cosmetic surgery to attract more paying customers and broach more challenges. He was aware of the distinction between “reconstructive surgery,” however, and what he labeled “beauty surgery.” The former is “an attempt to return to normal,” he said, while the latter is “an attempt to surpass the normal.”

Another gem tucked into the epilogue divulges how wars — and World War I was no different — elevate those who orchestrate the slaughter, not those handling the bloody aftermath. While the medical world heralded Gillies, the English public and leadership barely knew him.

The snub was noted by Sir William Arbuthnot Lane, a senior surgeon and key ally of Gillies in setting up Queen’s Hospital. “To my amazement, such monetary and titular awards were allotted to only…the fighting generals,” Lane wrote. “Men (who) save life never get the same appreciation and reward as those whose business it is to destroy it.”

That changed in June 1930, when Gillies was knighted. He reflected on the recognition — 12 years after the war ended — not as “a personal honour but as one shared by all those who had been with me in the pioneer work.”

In the end, perhaps the highest compliments poured in from his grateful patients. “I can never forget your wonderful kindness to me and all that you have done to make my life worth living,” one recovered soldier wrote. “I am looking so well that people are beginning not to believe it when I tell them that I was nearly burnt to death eleven years ago.”

Elizabeth H. McGowan is a Washington, DC-based energy and environment reporter whose work appears in an array of publications. She has won numerous awards, including a Pulitzer Prize in 2013 for “The Dilbit Disaster: Inside the Biggest Oil Spill You Never Heard Of” as a staff correspondent for InsideClimate News. Bancroft Press in Baltimore published her memoir, Outpedaling ‘The Big C’: My Healing Cycle Across America in 2020. Find her on Twitter and Facebook.