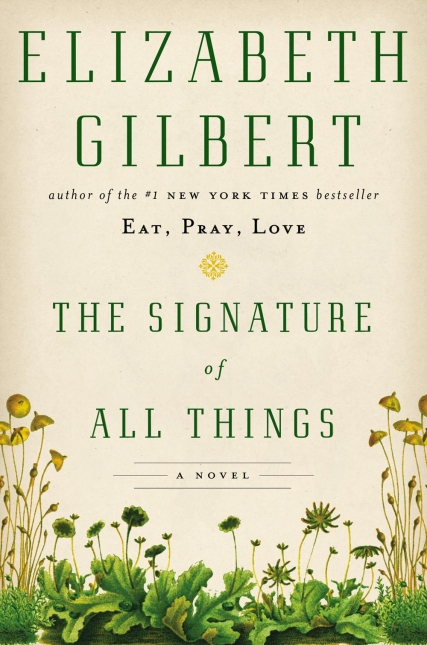 It’s said that authors of successful books often find it hard to keep writing. Will they be able to replicate their triumph? Will readers’ and reviewers’ expectations be disappointed?

When the successful book is a cultural phenomenon on the order of Elizabeth Gilbert’s Eat, Pray, Love — which sold 10 million copies worldwide and became, as they say, a major motion picture — those questions could become paralyzing. But Gilbert seems to have found her success liberating instead. She says the pressure is off now, because she knows there’s no way to match what happened with Eat, Pray, Love. And she says it gave her the freedom, financially and artistically, to write whatever she wanted.

What she wanted to write turns out to be something quite different from Eat, Pray, Love. It’s a 500-page novel set in the 19th century that shares many attributes of an actual 19th-century novel: a broad sweep, a populous and changing cast of characters and an omniscient narrative voice that sometimes keeps the reader at a remove. Gilbert has said that her favorite authors are Dickens, Eliot, the Brontës and James, and in some ways the novel is her homage to them.

But fans of Eat, Pray, Love will also find familiar elements here. There’s a frank sensuality that no respectable 19th-century author would have dared to include. Glimmers of the direct, humorous voice that Gilbert used in her memoir emerge through the quasi-Victorian verbiage. And Alma Whittaker, this novel’s main character, eventually undertakes a voyage of discovery that in some ways parallels Gilbert’s own.

While there’s not much eating in The Signature of All Things, there’s quite a bit of loving, and also some idiosyncratic praying. In fact, the novel might have been titled Love, Pray, Know, because it is Alma’s lifelong quest to understand as much as possible of the world around her. She’s a supreme rationalist, living at a time when traditional beliefs are beginning to crumble. And yet she yearns to know as well what reason alone cannot explain.

The book begins with a brief allusion to Alma’s birth in 1800, and then, in magisterial 19th-century style, swoops back 40 years to trace her father’s rise to wealth and power — “while we wait,” our narrator tells us, “for the girl to grow up and catch our interest again.” Although the 50-page survey of Henry Whittaker’s colorful early life is dazzling in its accumulation of detail, it’s questionable whether this prologue is really necessary. So much ground is covered that it’s hard to connect with Henry or anyone else, and it doesn’t help that Henry is a grasping, hard-nosed character.

In fact, all four of the main characters introduced in the book’s first 100 pages are tough to warm up to. There’s gruff, peremptory Henry; his stern Dutch wife, Beatrix; their beautiful but wooden adopted daughter, Prudence; and Alma herself, a large, homely girl, who single-mindedly pursues her passion for science by wandering her father’s vast estate outside Philadelphia, carefully examining every flower and insect that crosses her path.

But it’s worth sticking with the story, because soon we’re caught up in what turns out to be an engrossing novel of ideas. Cerebral Alma at last discovers sex (appropriately enough, through the pages of a book) and develops an unrequited attraction to a kind but awkward publisher of botanical books and journals. Through him she meets the true love of her life: a gentle, feckless but exceedingly talented botanical artist specializing in that most louche of flowers, the orchid. (Alma herself, meanwhile, has become an authority on mosses.) Although the artist returns Alma’s devotion, and they marry, it turns out that his obsession with an obscure mystical tract — titled The Signature of All Things — has moved him to renounce all carnal contact in hopes of communion with the divine.

Alma’s attempts to understand her husband eventually take her to Tahiti, where she has an epiphany that leads her to anticipate Darwin’s theory of natural selection. Ultimately coming to roost in Amsterdam, she dithers about publishing her thoughts on the subject because she cannot explain where traits like selflessness and altruism fit into the struggle for survival.

I have quibbles with the book in addition to its slow beginning. Although Gilbert has clearly done her homework on 19th-century scientific thought, there’s a peculiar ahistoricism to the narrative. Alma is a woman making her way in a male-dominated field at a time when such forays were not only rare but almost unthinkable. And yet she seems unaware of the nascent feminist movement of the mid-19th century. Yes, Alma’s father’s wealth and her mother’s determination that she receive a rigorous education have put her in an unusually privileged position. But she might at least notice that other women have it a lot worse, and maybe even read something by Margaret Fuller or Elizabeth Cady Stanton. The only social development she takes note of is the abolitionist movement, and only then when forced to by her socially conscious sister.

But overall, The Signature of All Things is a remarkable achievement: a charmingly written, ambitious and wildly inventive novel that wears its learning lightly and leaves us, if not yearning for more, at least quite satisfied to have gotten as much as we have.

Natalie Wexler is the author of the historical novel A More Obedient Wife. She is currently working on a novel set in the early 19th century and based on the life of Eliza Anderson, the first woman to edit a magazine in the United States.