This taut thriller tackles the perils of going home again 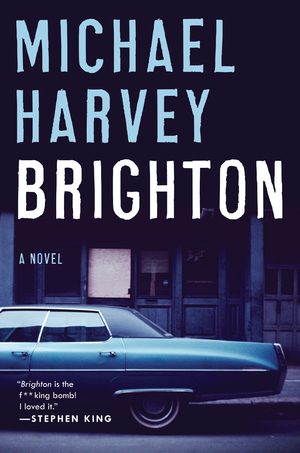 A superb crime thriller with all the hallmarks of high-end literary fiction, Michael Harvey’s Brighton employs — and brilliantly handles — the two-timeline structure. What happened in 1975, and seemed to have been buried there, bubbles up to the surface 27 years later in frightening and grotesque ways. The exposure of secrets, even the threat of exposure, can change lives — mostly for the worse. What happens in Brighton may not stay in Brighton. And yet it doesn’t leave, either.

The Boston neighborhood of Brighton that Harvey paints is rich in physical detail and cultural character. It might as well be called Blighton for the moral blight that reflects and nourishes the socio-economic blight. The economy of drugs, gambling, extortion, and other criminal occupations is pretty much above-ground — and yet there are secrets.

It’s a place where survival of the fittest is not merely a theory. Brighton is its testing ground.

The novel focuses on the man who got away: Kevin Pearce. Kevin was a high-school hero. Baseball star, outstanding student, pretty much liked by all, he was the pride of Brighton when he suddenly disappeared at the age of 15. The violence he got into with his best friend and mentor, Bobby Scales, would have doomed his great promise. Aided by Bobby, he vanishes and slowly builds a reputable life. Bobby stays behind to sacrifice his future, shielding Kevin’s name.

Bobby’s advice to his friend is never to return.

Brighton’s newspaper readers could have followed Kevin’s success as an investigative reporter who, as the 2002 timeline reveals, has just won a Pulitzer Prize. Unfortunately, the story has connections to Brighton. Loose ends and suspicions bring Kevin back to visit his old neighborhood, where his presence is met with mixed reactions.

While some welcome his visit, others feel that he had abandoned his home turf for too long. Often enough, people who move from a stifling environment to new opportunities are accused of thinking too highly of themselves — too good to mix with those who stayed behind. But Kevin has had other motives for staying away, even from his two sisters.

As the novel progresses, we find out more about the reason for Kevin’s Pulitzer and more about a connection between several murders — eventually discovering that one pistol links them all. We also discover that Kevin has impressed a Boston prosecuting attorney, Lisa, both professionally and romantically. He is living with Lisa, at least one of whose cases is part of this web. Both Kevin and Lisa teeter on the edge of professional misconduct in the ways in which they deal with information important to both of them.

Lisa is focused on polishing her future; Kevin is drawn to redeeming his past.

At one point in the novel, Lisa asks Kevin to retrieve something from her briefcase. While looking for it, he comes across a file folder promising information on the 1975 homicide of a man named Curtis Jordan. This is the crime that led Kevin to flee Brighton as a teenager.

What does it mean that this material is in Lisa’s briefcase? Does she know about Kevin’s connection to this murder? Did she put it there expecting him to find it? He copies the full report on their printer-copier while Lisa is finishing up in the shower. Early the next morning, Lisa calls Kevin from Brighton asking him to meet her there.

Kevin’s return to Brighton includes the inevitable visit to see his childhood friend Bobby Scales, now quietly and efficiently leading the criminal life. Into their reminiscence, Michael Harvey slots a flashback to reveal the full scene of what happened back then. Wait until you read it! Meanwhile, Lisa and her boss are recording conversations.

In too many novels, the elaboration of the plot does not promote a deepening of characterization. In Brighton, however, such elaboration is abundant. Layer upon layer of traits, memories, fears, expectations, and relationships complicate Harvey’s major characters and even some of the minor ones.

There’s an old creative-writing rubric that values the proper balance of consistency and complexity in character building, and this novel could stand as a case in point. Readers will turn the pages as much to uncover the ongoing complications of the characters as to discover the next turn of the plot.

The ur-character hovering over the entire novel is Brighton itself. It is the primal force driving its sons and daughters. The mean, sordid nature of the place is introduced early and reinforced all along the way. Drunks, beaten children, low incomes, low prospects. It’s a swallow-breakfast-early-and-get-off-to-school-before-your-father-wakes-up kind of place. Nature and nurture are swirled around and around; a constant low-level storm of anxiety and hopeless dreams soaks into every building, every intersection, every family, and almost every soul.

This mighty thriller will exhaust you and fool you, astonish you and hold you in its clutches. You may wish you could close your eyes, but they’ll be stuck wide open.