The Rise of the G.I. Army, 1940-1941: The Forgotten Story of How America Forged a Powerful Army Before Pearl Harbor

A detail-rich, engaging account of the United States’ WWII preparations. 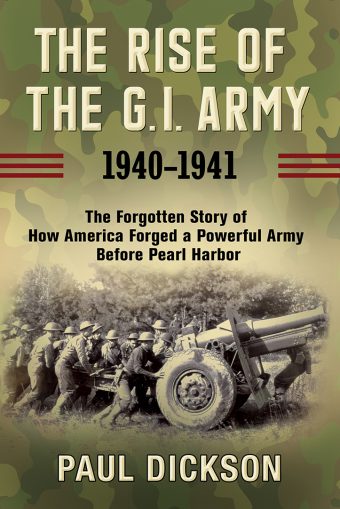 In this exhaustively thorough volume, Paul Dickson serves up a detailed picture of our nation’s just-in-time preparation for battlefield action in World War II. Dickson, an indefatigable researcher, again demonstrates his talent for marshaling ground-level details and contemporary newspaper accounts into a coherent and engaging story.

The Rise of the G.I. Army, 1940-1941 is a remarkable work of historical scholarship, an eminently readable narrative crafted from a swarm of disparate and far-flung sources. The author plunges boldly into a saga that few other experts have explored in detail.

In the mid-to-late 1930s, the U.S. population, mired in the Great Depression, was nearly universally isolationist in sentiment. Beyond President Franklin Roosevelt and his circle, only a minority saw war against Hitler as inevitable or even necessary. Some saw the Atlantic as buffering our shores from invasion; relatively few saw an urgent need to upgrade America’s armed forces to get involved in a regional European war.

But other, better-informed observers saw an alarming future looming.

As Dickson reports, the American army in 1939 comprised fewer than 190,000 troops, compared to Germany’s four-million-plus men in arms. Roosevelt’s military planners — among whom the most inspired and prescient were Army Secretary Henry Stimson and General George Marshall — moved in 1940 to buttress preparedness by instituting a moderate one-year draft. Not surprisingly, public resistance soared.

This response was understandably strong among the new program’s unwilling conscripts, spawning the so-called OHIO (“Over the Hill in October”) movement, a seemingly popular resistance movement that fizzled as the fateful year of 1941 wore on.

Even so, many prominent voices bolstered the isolationist groundswell. In a 1940 Reader’s Digest article, for instance, national hero Charles Lindbergh warned Americans not to be led into “a war which will reduce the strength and destroy the treasures of the White race, a war which may even lead to the end of our civilization.”

He also warned against “dilution by foreign races…and the infiltration of inferior blood.” Some readers might be surprised by the virulence of Lucky Lindy’s racist and pro-Nazi beliefs, but there they are, stunningly clear.

In the face of this and less noxious “leave us out of it” sentiments, it was no easy slog to bring the American people around to respect both the potential effectiveness of our troops and the worthiness of their mission.

Perhaps surprisingly, it was the Civilian Conservation Corps (CCC), first instituted by President Roosevelt in 1933 to put unemployed young men to work in environmentally significant tasks, that proved a key driver in acclimating Americans — participants and public observers alike — to camp life and military-style discipline.

Known popularly as the “Tree Army,” the CCC effectively groomed the most talented of its participants for leadership, roles many of them would take up as commissioned and non-commissioned officers in the coming war. Their availability allowed Marshall and senior Army brass to jettison many marginally qualified officers hanging on from the 1920s and early 1930s.

But most significant in Marshall’s program were the massive training maneuvers, spanning weeks and sometimes months, and stretching over hundreds of square miles in Texas, Louisiana, and the Carolinas.

On a practical level, the maneuvers enabled the military to refine strategy, tactics, logistics, and equipment, not to mention bringing its units up to battle-ready strength. Even more than the CCC, the training maneuvers fine-tuned a new generation of leaders and highly disciplined soldiers. Moreover, the ebb and flow of mock warfare in these exercises, amplified by extensive coast-to-coast newspaper coverage, ignited the public’s imagination.

Marshall emerges as the hero in this saga. And his contributions to the American story extend into the post-war period and beyond, where his plan for the reconstruction of war-ravaged Europe would cement this nation’s world leadership for (at least) the next 65 years.

There are other luminaries, too, names most readers will recognize: Dwight Eisenhower, Omar Bradley, Lucien Truscott, Mark Clark, and even maverick George Patton. Douglas MacArthur, an overt and arrogant racist, doesn’t rise to prominence in Dickson’s account.

This latter factor deserves mention. Dickson provides unstinting coverage of the military’s Jim Crow policies throughout the runup to the war and through WWII itself. The irony is plain: We Americans step up to defeat three rogue nations anchored in racist, jingoist policies, but we can’t seem to get past the similar underlying flaws in our own military and society.

All in all, The Rise of the G.I. Army, 1940-1941 is a brilliant history. In the sad and dispiriting times we’re living through today, it shines a light on a saga that’s largely uplifting yet still shot through with elements counter to our ideals. It’s a long story we all need to see as our own, as characteristic of our nation today as ever.