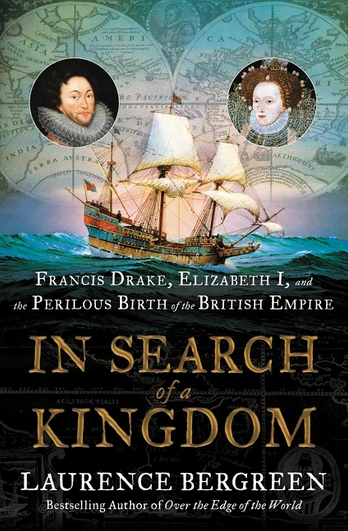 Francis Drake is usually a footnote in the grander story of the Elizabethan Golden Age, a rogue and a pirate whose goals dovetailed enough with Elizabeth I’s imperial ambitions to allow him to be just that. In In Search of a Kingdom, Laurence Bergreen shows both a more mutual relationship between monarch and privateer and a more nuanced portrait of the captain who “singed the King of Spain’s beard.”

Drake exploited Elizabeth’s tension with the Spanish and need for ready cash to plunder the Spanish treasure fleets, gaining her (often secret) protection in exchange for a share of the haul. Meanwhile, Elizabeth used Drake’s relentless quest for treasure as cover for her desire to challenge Spain’s domination of the New World. Their complementary ambitions resulted in the first successful circumnavigation of the globe by an Englishman, expanding England’s power in Europe and beyond.

The risks of such an ambitious voyage were great enough for Drake to lead his crew to believe that their mandate was primarily trade and raiding. It certainly was, in part; Drake was not particular what route he took around the world as long as he could feed his limitless desire for gold along the way. He also claimed Elizabeth gave him total authority over his crew, common sailors and gentlemen alike.

One of the “gentleman adventurers” on the voyage, Sir Thomas Doughty, challenged Drake’s claim to unilateral authority. Drake, never impressed by titles, accused Doughty of mutiny and witchcraft, taking the role of both judge and executioner. For a common man to rule over an aristocrat was controversial, but the case instituted a tradition of equality among English naval crews that persists to the modern day.

Drake’s accusations may have covered the true source of his ire: Doughty’s attempt to prevent Drake from provoking the Spanish into open conflict with England. Drake’s hatred of the Spanish was based not only in his fervent Protestantism but also his encounters with their version of empire. Their torture of prisoners enraged him (Drake lost a cousin to the Inquisition, burnt at the stake in Mexico), and their exploitation of the Indigenous confirmed his every suspicion of the evils of Catholicism. In Drake’s mind, his looting of Spanish ships and settlements was just revenge for the cruelties of the Spanish New World.

Yet he treated the Spanish civilians he robbed with mercy. Unusually for the time, he killed none and often released them once he’d emptied their ships’ holds. Taken in by his charm, his prisoners grew to admire “El Draque” almost as much as they feared him, begging the authorities to show leniency should they ever capture him. They never did, due to Drake’s cunning and great good luck, though Philip II of Spain saw him as a constant threat.

When Drake set aside his maverick ways and allowed himself to be commanded, he proved loyal to queen and country during the events leading up to the battle with the Spanish Armada. His raid on Cadiz in 1587 destroyed enough ships and supplies to delay the Armada by a year, while announcing Elizabeth’s intent to fight. But he wasn’t afraid to challenge the queen to whom he owed so much. When she favored 11th-hour peace negotiations with Spain, he advised her of the inevitability of the Spanish attack.

Much of the book is devoted to Drake’s circumnavigation, and it is here that the contradictions of his personality come into focus. Deeply religious (his father was a clergyman), Drake enforced religious practice onboard and led the singing of Psalms before attacks. While a voracious thief, he only stole goods, not people.

Though Drake began his career as a slaver, he abandoned the trade in human life after witnessing the cruelties of its practitioners. He later allied with escaped African slaves to attack Spanish settlements. His benevolence extended to the native peoples he encountered. In contrast to the vicious conversion tactics of the Spanish, he greeted locals with a kind of paternal patience that sought to cooperate rather than dominate.

The narrative jumps back and forth between accounts of Drake’s career and discoveries and the background of his and Elizabeth’s lives. Far from being jarring, this juxtaposition highlights motive and context for their actions and creates a cliffhanger-style pace that keeps the reader turning the page. Still, there are few new revelations about Elizabeth I that haven’t already been covered in other biographies, and readers can find a more complete examination of her court politics and intelligence services in the work of Stephen Alford.

The great pleasure of In Search of a Kingdom is the revelation of Drake as a man of apparent contradictions that helped rather than hindered his ambitions. Readers in search of a story of how a clergyman’s son gained the support of a queen and helped found the British Empire will not be disappointed.

Allison Thurman has a longstanding interest in 16th-century history and is currently editing her first novel about the Elizabethan medium Edward Kelley. She lives in Gaithersburg, MD, with too many books and not enough swords.