The Right to Sex 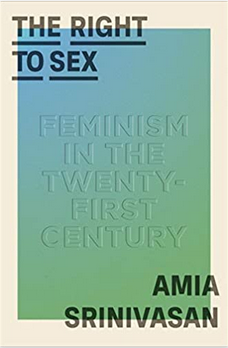 At first blush, The Right to Sex: Feminism in the Twenty-First Century may strike prospective readers as a book about the right of women and other marginalized persons to have consensual sex how and with whom they please. Or perhaps the right of individuals to have sex for non-procreative reasons — something the ongoing birth-control wars in America suggest is far from being settled into law.

In fact, Amia Srinivasan’s so-named collection is built around an essay she wrote for the London Review of Books on Elliot Rodger and the “incel” (involuntary celibate) movement. In 2014, the 22-year-old Californian went on a killing spree and then shot himself, leaving behind hate-filled screeds about modern women who refused to sleep with him. Like other self-styled incels, Rodger perceived a right to others’ bodies, positively fuming that a certain “white girl” would choose an “inferior, ugly” Black male over him, “descended from British aristocracy.”

It’s no surprise that Srinivasan does not recognize a “right to sex” such as Rodger envisaged. Yet in thinking about his and other incels’ proclamations, she considers the way power is publicly conferred — and not conferred — when it comes to private sexual acts, rendering certain kinds of sex and ways of being respectable, and others in need of discipline.

This “politics of fuckability” leads her to wonder what it would take to birth a world in which no bodies, desires, or consensual acts were treated as less than, and in which there were no need to protect any sex with the largely symbolic register of rights. The reader wouldn’t be entirely wrong, then, in supposing that this book affirms conventionally frowned-upon kinds of sex.

This is just one of the tensions in The Right to Sex, a collection that poses more questions than it answers. Srinivasan, who, at 36, is the youngest person and first of color to hold the Chichele professorship in social and political theory at Oxford University, early on declares that she is “unwilling to reduce what is dense and ­difficult to something easier.”

In this spirit, and with an alluring style that gives readers the sense of rolling around in thoughts with her, the author readily engages second-wave feminists, many of whom are now viewed as too white and juridical in their thinking. And she critiques the intersectional and sex-positive feminists who dominate today’s discourse.

In the titular chapter, for instance, she takes issue with the common notion that consent is the only measure of “good” or ethical sex. Drawing upon 1970s anti-porn crusader Catherine MacKinnon, who famously argued that desire was socially conditioned — hardly the innate, pre-political drive Freud described — she urges greater scrutiny of the ways in which patriarchy, race, and class shape how and whom one wants.

Such concerns, she notes, are the type that intersectionalists profess to take up. Is it a fear of moralizing about desire that prevents them from doing so? If so, she argues, they should not confuse moralizing with moral analysis, which has more to do with truth-telling than laying down the law.

Chapters on pornography and sex work urge similar caution. Srinivasan unequivocally acknowledges how both industries enact sexual violence against women, while stating that the “carceral feminism” (using punitive measures to achieve a political end) espoused by MacKinnon and others is hardly the answer.

No oppressed group has ever policed its way to liberation, and appeals to state power invariably worsen the material lives of the most marginalized. Even if it were possible for courts and criminal justice systems to usher in utopia, the means would not justify the ends. “Any choice between improving the lives of existing people and holding the line for a better future must be settled in favour of the former,” she writes.

It’s clear from such a declaration that there are certain ideas upon which the wonderfully ambivalent Srinivasan does insist — namely, that feminists should aspire to change the world without turning to law enforcement and that a political movement that privileges its future or majority members is not a truly emancipatory one.

She makes the latter point especially clearly in a chapter on #MeToo, which reveals the limits of the exhortation to “believe women” about sexual abuse. Noting the frequency of false rape accusations against men of color, she asks, “Whom are we to believe, the white woman who says she was raped, or the black or brown woman who insists that her son is being set up?”

Some readers see Srinivasan’s anti-carceral feminism as naïve. “It’s a nice idea,” a Sunday Times reviewer writes, but one that “hand-waves the practicalities.” Some may alternatively wonder why there is no discussion of the traditions that have, for centuries, spurred feminists to change the world without recourse to the disciplinary power of the state: those of faith.

Srinivasan’s readers encounter a bell hooks who is sanitized of her Christian Buddhism, and they do not read that some of feminism’s most imaginative revolutionaries today are working squarely within spiritual traditions. Sikh “Woman Warrior” Valerie Kaur comes to mind, as do Christian organizers like Rev. Dr. Jacqui Lewis and Stacey Abrams.

While Abrams is part of the political establishment, and while she does work within the rights-based framework about which Srinivasan has some misgivings, she is also laboring arduously to dismantle the police state and grow a “beloved community” wherein love and justice triumph over hate and violence. Like such luminaries as Fannie Lou Hamer before her, she dreams big, as her faith compels her to believe that nothing is impossible.

If there is a philosopher able to think toward a more spiritually plural feminism, it may be Amia Srinivasan, who — this book makes clear — is so curious and inventive. The Right to Sex is a truly stunning debut, sure to provoke, unmoor, and inspire many.

Audrey Clare Farley holds a Ph.D. in English literature and is the author of The Unfit Heiress: The Tragic Life and Scandalous Sterilization of Ann Cooper Hewitt. Her work has appeared in the Atlantic, the New Republic, the Washington Post, and many other outlets.

Basilio Boullosa Stars in the Fountain of Highlandtown: Stories