The Real Wallis Simpson: A New History of the American Divorcee who Became the Duchess of Windsor

Though engaging, this biography offers little fresh insight into the scandalous "royal." 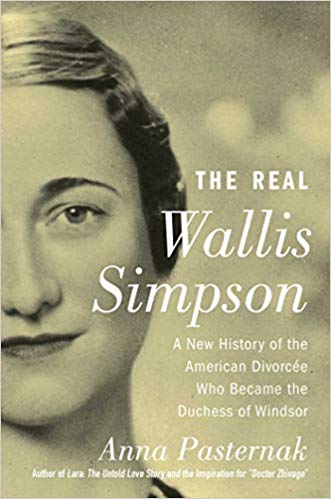 Anna Pasternak boasts a famous name, thanks to her great uncle, Boris Pasternak, who wrote Doctor Zhivago and won the Nobel Prize for Literature in 1958. With such big boots to fill, she sets out, in The Real Wallis Simpson, to redeem the tattered image of the Duchess of Windsor and “to bring [her] favourably back in the eyes of the world.”

In 1994, the author collaborated with Major James Hewitt to write Princess in Love, described by People as his “diss and tell” about his affair with Princess Diana. The magazine described him as “The Lady’s Chatty Lover.”

Pasternak begins this book with an eye-popping dedication: “To Wallis, Her Royal Highness, The Duchess of Windsor.” Back in the day, that dedication would’ve rained down wrath from all the king’s horses and all the king’s men and surely banned the book’s publication in England, while causing palpitations in those who live and die by Debrett’s Peerage.

His/Her Royal Highness, or HRH, the honorific bestowed on royalty or those who marry royalty, was denied Wallis Warfield Spencer Simpson, the twice-divorced American who married King Edward VIII after he abdicated his throne for her, “the woman I love,” in 1936.

He then became the Duke of Windsor and she became the duchess, who, as such, was entitled to the curtsies and courtesies of royalty. But they were never to be hers because the palace, in the person of her in-laws, King George VI and Queen Elizabeth, despised “that woman.”

The knock-down, drag-out over that title was deliciously detailed in 1985 by Michael Thornton’s Royal Feud: The Queen Mother and the Duchess of Windsor. From the moment of the king’s abdication, Wallis Simpson knew that, without the royal protection of “HRH,” she would be tossed in the trash bin of history as the villainess who deprived England and all her dominions of their glittering monarch.

The duke dedicated the rest of his life to trying to obtain the royal title for his wife, to seeing that she would be received by the reigning king and queen, and that the event would be recorded in the Court Circular, the published list of official royal engagements. All to no avail.

It’s important to note that, next to HM (His/Her Majesty), no initials are more sacred to monarchists in their class-bound society than HRH. This was evidenced by the fight Diana, Princess of Wales, waged to keep her royal designation after her divorce from Prince Charles.

As mother of the future king of England, Diana felt she was entitled; the palace and Prince Charles felt otherwise. Losing her royal status reduced her in the eyes of the public and cost her much in terms of respect and protection.

Two decades later, however, royal strictures were relaxed enough that the honorific was bestowed on Meghan Markle, a divorced, biracial woman who identifies as African-American, when she married Diana’s second son, Prince Harry, sixth in line to the throne. So Pasternak’s dedication might be shrugged off now by the palace as nothing more than a cheeky bid for book sales, but it’s part of her impassioned plea for the Duchess of Windsor, who, she contends, is the subject of antipathy to this day.

The story of the most scandalous love affair of the 20th century has been told often in books by and about the Duke and Duchess of Windsor, and most recently in the Netflix series “The Crown.” Readers of The Real Wallis Simpson will find nothing new in this book, no previously unpublished interviews, no revelations from the padlocked Windsor archives.

Pasternak does her best with the public record, and she writes engagingly about the duchess as being “warm” and “witty,” but her earnest effort at restoration is undermined and falters because of her omissions: specifically, the Nazi stain on the Windsor image.

Pasternak makes no mention of the duke and duchess accepting a 12-day paid trip from Adolf Hitler in October 1937 to tour Germany as his personal guests, which some historians suggest might’ve been part of Hitler’s plan to place the duke back on his throne as a puppet king once Germany invaded Britain. The photograph of the Führer wearing a swastika armband and leaning over to kiss the hand of the delighted duchess jolted British subjects, who would soon sacrifice much in the war. The New York Times covered that visit with the headline: “Duke of Windsor Salutes, Cries ‘Heil Hitler.’”

The duke was not alone at that time in supporting appeasement. Joseph P. Kennedy, U.S. ambassador to the Court of St. James, also espoused isolationist views but, once the Nazi jackboot fell on Britain, Kennedy was recalled by President Roosevelt, and Prime Minster Churchill ordered the Windsors to the Bahamas, where they lived luxuriously until the war’s end, while the king and queen stayed in London during the Blitz. Throughout, the duke continued making political comments many found defeatist, even traitorous.

The Windsors remained exiled from England for the rest of their lives and deprived of all royal prerogatives. They lived rent-free in a Paris mansion hosted by the French and reigned indolently over café society as gilded guests of fashionable nightclubs, resorts, and restaurants. The duke spent his days designing jewelry for the duchess, and she spent her nights bedecked in it. Pasternak footnotes that the Sotheby sale of that jewelry, in 1987, broke all records at $50 million.

Only after the duke and duchess died were they finally allowed to permanently return to England, where they now lie side by side in the royal graveyard at Frogmore on the grounds of Windsor Castle.

Kitty Kelley is the author of seven number-one New York Times bestsellers, including The Royals, which was published around the world but banned in Britain.