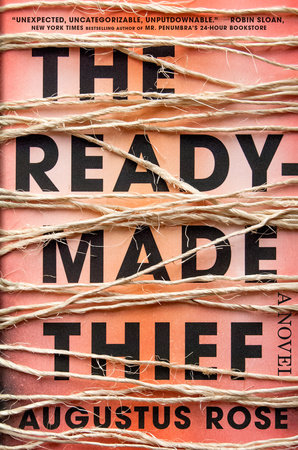 Loneliness is endemic to all of us, but loneliness like Lee Cuddy’s is something special. Lee is the teenage heroine of Augustus Rose’s new novel, The Readymade Thief. She lives outside the tattered edges of Philadelphia. She is alternately a thief, a convict, a street kid, a squatter; always a survivor.

She looks like a waif but she is pure metal inside — maybe she goes soft sometimes, but she always keeps her essential nature. She tunnels in the hidden spaces underneath the city, or lurks on the fringe in derelict, apocalyptic dumps or in well-kept, if sterile, houses temporarily abandoned by their wealthy owners.

As the novel opens, we hover over Lee like she’s unknowingly under a prison searchlight. She has just borrowed a dinghy from a Philadelphia pier and used it to row secretly to an abandoned, bulldozed old aquarium on an island in the middle of the Delaware River. We know she is 33-days pregnant. We know that someone is chasing her, and that someone has followed her to the island and can predict her every move. In the old aquarium, a secret message awaits Lee.

We also know that Lee is the doppelganger of a long-dead woman who was young at the beginning of the 20th century; someone named the Station Master wants Lee to return the thing she has taken.

The cult is comprised of alchemist-minded mad scientists who have modeled themselves on the metaphorical nine bachelors of Duchamp’s Bride Stripped Bare by Her Bachelors, Even (permanently housed in the Philadelphia Museum of Art, where some of the dangerous scenes happen), and they’ve decided that Lee is their bride who will serve as a key to their life work.

There is a menacing home for “gone” kids called the Crystal Castle — like a dark twist on Andy Warhol’s factory with child abduction and urban-techno raves thrown in. There is the Deep Web, with its passwords and dark trade of secrets. And there is an undercurrent of Grimm fairytale running through the narrative, with a deep and murky moral.

Lee demonstrates vitality when the Société Anonyme forces her underground only to smoke her out later. Here, the plot gets complicated and follows the Duchamp quote Rose uses as an epigraph: “There is no solution, because there is no problem.”

The book’s magic is Lee and the atmosphere she helps to evoke. Rose blends the ordinary world and the underworld in a disturbing way. Through Lee’s stark and clear-eyed view of things, the ordinary “safe” settings of the novel are anything but; there are frequent hints at what lies below the surface.

The glimpses start with Lee’s home life: Her father, an alcoholic musician with a touch of bisexuality, has to sneak his drinks and makes forays into the park for dalliances. He abandons Lee to her mother, who abandons her mentally and emotionally if not physically. “Home” for everyone in the book is a bit of a hellhole if it exists at all. Then her mother meets Steve, an obnoxiously selfish New Age Buddhist.

Then there’s Lee’s high school, where the hints at the Société Anonyme start when the cool, rich girl Edie Oswald takes Lee under her wing. “I’ve been looking all over school for you,” Edie tells her. “For a while I thought you might be one of those gone kids.”

This is when you get the hint that even occurrences we’re used to — teenagers disappearing — mean something different in the puzzle where Lee finds herself.

“Over the past few months seven teenagers…had simply disappeared without a trace. One of them showed up again a few weeks later, a fifteen-year-old boy from a foster home in the suburbs, but he was still gone. His eyes were engorged and depthless, and it was as though his consciousness had been scooped out…”

Sometimes it feels as if you’re running with Lee in concentric circles, and every time readers pass familiar landmarks, they are sure to notice something different. As the Société Anonyme chases Lee through the novel, the joke might be on them: Maybe she’s the one who gets to be like Marcel Duchamp. She’s certainly the only one who can ultimately rig the solution to all the problems unleashed in this story.

Susannah Luthi is a health-policy reporter in Washington. Her short stories have been published in New World Writing and Californios. She is represented by Dystel & Goderich and is at work on a book about the underworld of the vanilla trade.