The author defies conventions of genre fiction in this story about life in a blue-collar Brooklyn community following the tragic loss of a teenage resident. 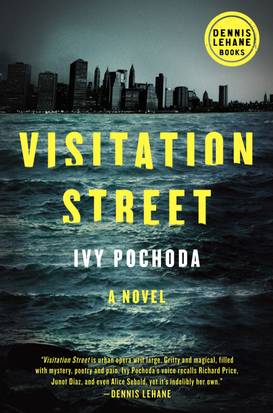 Ivy Pochoda’s second novel (after The Art of Disappearing) is a gritty, evocative tale of the aftermath of a teenage girl’s disappearance from the working-class Brooklyn community of Red Hook.

On a hot August night, 15-year-old friends Valerie and June sneak out in search of fun. With no cool crowd of their own to hook up with — “Summer is everybody else’s party” — they create an adventure by dragging an old pink raft into the bay between Brooklyn and New Jersey. At some point during the excursion June disappears into the dark water. Val washes ashore, unconscious, and her music teacher, Jonathan Sprouse, finds her in time to save her life.

June’s disappearance sends a shock through Red Hook, a quiet and isolated blue-collar neighborhood that is home to people of various races and ethnic backgrounds but remains stubbornly segregated. At the time of the story, the major upcoming event is the arrival in port of the Queen Mary 2, which Red Hook’s small business owners are counting on to bring an infusion of tourist dollars.

One of those shop owners is Fadi, who works tirelessly to make his Lebanese bodega the center of Red Hook’s community life. He puts together a newsletter about mundane events in the neighborhood, and he clips newspaper stories to post in his shop. After June’s disappearance, Fadi wants to be the person everyone looks to for news of the latest developments. Even the impending arrival of the Queen Mary 2 is overshadowed by the girls’ ill-fated excursion on the bay and the search for June’s body.

Although Fadi declares Jonathan a hero for saving Val, the music teacher cringes under the overblown attention. He has settled deeply into his identity as a failure — a musician who couldn’t make a living by performing — and has ended up in Red Hook, teaching indifferent teenagers by day and drinking himself into oblivion at a local bar every night. His experience with Val unsettles him, reawakening memories of a tragic loss earlier in his life.

As weeks pass and the search for June proves futile, Val feels suspended in time, waiting for a definitive ending to release her so she can move forward into her future. Other kids treat her like a curiosity. Suffering from survivor’s guilt and hiding the full truth of what happened between her and June that night on the bay, she doesn’t bother to contradict the wild stories her classmates dream up. She engages in a kind of magical thinking that marks the bargaining phase of grief: if she does this or that, June will come back, alive and well.

The two girls, ostensibly the center of attention, are the palest figures in the story. June is gone and her family is hardly mentioned. Val is an immature teenager who seems unable to draw any deep meaning from her experience, and the novel occasionally suffers from repetition as she remains stuck in the same emotional rut. She seems oddly alone in the world, barely interacting with her family even as she goes through the greatest crisis of her young life. Flailing about for someone to connect with, she seeks out Jonathan — who would lose what little he has left if he became involved with a 15-year-old student — as well as a local woman who claims to communicate with the dead, and the woman’s son, Cree, a teenager still mourning his murdered father and yearning to break free of Red Hook. Although no evidence exists that a crime was committed, Cree comes under police suspicion in June’s disappearance because he was on the docks the night the girls took the raft into the water — and because he is black. A mystery man named Ren appears out of nowhere, appoints himself Cree’s protector and pushes him toward the world beyond Red Hook.

Visitation Street has been called a mystery and a literary thriller, but although crime has touched many lives in Red Hook, this story is not built around the solving of a crime, and the minor police investigation doesn’t drive the narrative. Pochoda doesn’t need the conventions of genre fiction to tell a compelling story.

With deep insight and a merciless eye, the author has created a cast of richly imagined characters who, in turn, bring the fading community of Red Hook to vivid life. This is the kind of novel the reader closes reluctantly, wishing it were possible to follow the characters into the future and make sure everything turns out well for them.

Sandra Parshall is the author of the award-winning Rachel Goddard mystery/suspense novels. Her latest title is Bleeding Through. She lives in Northern Virginia.