In this fantastical collection, flawed characters face the unintended consequences of their actions. 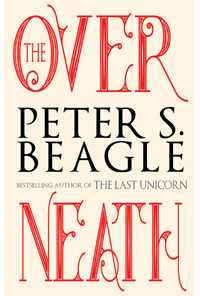 A woman unintentionally introduces an evil spirit into her fish tank. A boy rescues a karkadann — a vicious, unicorn-like creature that is “ugly as fried sin”— and cares for it, not minding its reputation as a cold-blooded killer. A man experiments with electromagnetism and awakens voices he can’t silence.

These are the protagonists of The Overneath, Peter S. Beagle’s latest collection of short stories. Beagle, a much-lauded veteran of the fantasy and science fiction worlds, has created here an assortment of tales centered on ordinary, if flawed, people who don’t always think through to the consequences of their actions. They stumble through these pages with all the grace of a rhinoceros, creating messes as they go and doing their best to clean up after themselves.

The Overneath contains 13 stories, each introduced with a brief paragraph about its provenance. I loved these little introductions and the amused but slightly academic tone Beagle takes, teasing his readers and obviously enjoying himself:

“Standing out of the way and leaving the narrative to its own business doesn’t always work,” he writes ahead of one story, “but when it does, it makes the author look so good, so professional…”

He carries this winking tone into several of the stories. This was, for me, the collection’s only weakness. While Beagle is clearly having fun, the overly amused tenor of the collection made it difficult to take his more earnest characters seriously, and hindered my ability to connect with them.

The characters, in contrast, were the collection’s greatest strength and far outweighed anything unappealing about the book. Beagle gives us Kao Yu, a judge whose courtroom is sometimes graced by a chi-lin — a Chinese unicorn; Richardson, a struggling professor of children’s literature who stumbles onto a secret about the Fremont Bridge Troll in Seattle; and Connie Laminack, a young woman on her first day of duty tracking down illegal dragons in the hills of rural California.

This particular story — “Trinity County, CA: You’ll Want to Come Again and We’ll Be Glad to See You” — was my favorite. It read like hard-boiled fantasy which, at least in this case, made for a good combination. As with all the stories, there is no real hero — just mistakes and quick wits.

As one would expect from the man who wrote the fantasy classic The Last Unicorn, Beagle’s knowledge of unicorn lore is deep. Three of the stories in The Overneath feature the prominent varieties of unicorn from folklore around the world. “The Story of Kao Yu,” as noted above, involves a chi-lin. “My Son Heydari and the Karkadann” focuses on a ferocious version of the mythical creature. And “Olfert Dapper’s Day,” the last story in the collection, tells of an early American settler and his encounter with a typical Western unicorn.

Most of the stories are unconnected. Two, however, revisit Schmendrick the Magician, a character from The Last Unicorn. We learn about his origins and training in “The Green-Eyed Boy,” and then about one of his early encounters as a magician in “Schmendrick Alone.”

Schmendrick is perhaps Beagle’s quintessential protagonist. He is talented almost beyond measure, always well-meaning, but not particularly bright. He doesn’t have good judgment and thereby creates unintended problems that he must then solve. It’s hard not to like him, though, and I found myself cringing for him as the problems became larger and the consequences increasingly dire.

I loved these stories because they are, above all else, human. Their magic does not lie in the fantastical settings and situations, but in the essential human truths they reveal. They deal with our obsessions, our well-meaning mistakes, and the choices we must make when our hearts and our minds are conflicted. Beagle’s characters must face the consequences of their decisions, and just like the rest of us, they either do their best to clean up the mess or learn to embrace it.

Katy Bowman is a writer and web developer living near Dayton, Ohio. She has had work published at the Antioch Review Blog, Circa: A Journal of Historical Fiction, and the Rumpus.

The Body Myth: A Novel