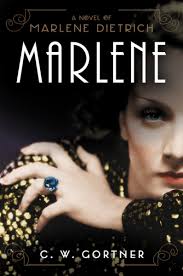 “The first time I fell in love, I was twelve years old,” recounts Marlene, the narrator of C.W. Gortner’s latest novel, a fictionalized tale of Marlene Dietrich. The object of her infatuation is her new high school French teacher, Mademoiselle Bréguand, a stylish and perceptive young woman who takes the rebellious Marlene under her wing. Although the relationship is brief, it sparks Marlene’s hunger for love and raises questions about her sexual identity.

Raised in a poor but genteel household, Marlene learns from an early age the importance of appearances. Her mother, the widow Josephine Felsing, is obsessed with maintaining the family’s reputation. The Felsings of Berlin were founders of the Felsing Clockmaker and Watch Company. Although they lost their fortune decades before and Josephine earns her living as a housekeeper, she clings to the traditions and manners that distinguish her family as upper class. “We never display our feelings in public,” she repeatedly tells daughters Marlene and Liesel.

Josephine has her hopes for the future pinned on Marlene’s musical abilities. Liesel is sickly and has no special talents, but Marlene shows promise as a violinist. As Marlene is not good enough to win a scholarship, Josephine scrapes together the money to send her to the conservatory. However, Marlene spends much of her time carousing and soon becomes involved in an affair with her married violin professor. Dismissed from the school, she goes to Berlin, her heart set on a career on the stage in spite of Josephine’s objections.

Gortner paints a vivid portrait of post-World War I Berlin, where liquor, drugs, and back-alley sex abound. Marlene finds work in several music halls, learning to use her gorgeous legs to her advantage. At Das Silhouette, a Weimar-era cabaret where both male and female cross-dressing was common, Marlene shows up regularly in a tuxedo. There she meets some of the most innovative movie and theater people in Germany, among them Rudolph Sieber, who will become her first and only husband. In Berlin, she also meets Joseph von Sternberg, who casts her as the lead in “The Blue Angel,” the film that launches her career.

Von Sternberg is a tyrannical director. “Fräulein,” he tells her on one occasion, “can you try to appear less bovine? You’re not modeling cheap underwear.” Nevertheless, he is largely responsible for Marlene’s success. He not only directs her, but also teaches her about lighting, angles, and the mechanics of filmmaking. As a result, during her entire career, she is meticulous in her preparation for roles, paying close attention to body position and the effects of light.

As anti-Semitism grows in Germany, many of Berlin’s intellectuals and artists leave. The studio plans to release “The Blue Angel” in English, which gives Von Sternberg, who is Jewish, the perfect excuse to immigrate to Hollywood. Marlene goes with him, followed soon afterward by Sieber and their daughter, Heidede.

Paramount finds in Marlene’s sultry sexiness the perfect response to MGM’s Swedish sensation, Greta Garbo. In Gortner’s novel, Marlene is fascinated to the point of obsession with Garbo, whom she doesn’t meet until after World War II. However, Hollywood legend has it that they met much earlier and had an affair.

In Hollywood, Marlene has a series of hits, among them “Morocco” and “Grand Hotel.” She also has countless affairs with both men and women. Gortner describes in graphic detail her liaison with Gary Cooper, who at the time is married to Veronica Balfe and sleeping with the tempestuous Lupe Vélez. “This was a star if ever I’d seen one,” Marlene thinks when she meets him.

Von Sternberg, with whom she has slept just once, but who clearly wants a prolonged affair, despises Cooper. “He was just the kind of man — handsome, poised, and athletic — my director would detest,” she muses. In spite of all her dallying, Marlene stays married to Sieber, who raises their daughter with his mistress, Tamara. In one amusing episode, Marlene, Rudi, and their daughter spend a vacation together with his lover, her lover, and even one of her former lovers!

When World War II breaks out, Marlene takes a strong stance against the Nazis. Although representatives of Hitler and Goebbels approach her to make propaganda films, she refuses. In 1939, she becomes an American citizen. By the time the United States joins the war, Marlene’s star appeal is waning. Many foreign performers have become “box office poison,” as xenophobia grows during wartime.

Unable to land good roles in Hollywood and anxious to serve her adopted country, Marlene signs a contract with the USO to perform for Allied troops. In 1944 and 1945, she entertains soldiers on the front lines in Algeria, Italy, and France, and even has an affair with General George Patton.

One of the most powerful episodes in the novel depicts Marlene’s return to Germany after the war. Faced with irrefutable proof of Nazi atrocities, she cannot come to forgive her sister, Liesel, who stayed in Belsen with her husband, managing a movie theater that ran propaganda films.

Unfortunately, the novel’s conclusion is abrupt and unsatisfying. It’s as though the author suddenly decided he had written enough and didn’t want to bother ending the story. He seems to acknowledge as much in his afterword, where he writes, “My passion for my subject inevitably collided with a finite word count.”

On the other hand, Gortner does do a wonderful job of humanizing his subject. One cannot help but admire Marlene’s courage in defying the Nazi regime, her loyalty to Rudy in spite of their separation, and her professionalism on set. Furthermore, one can empathize with her struggle against weight gain and her feelings of betrayal when Hollywood abandons her. Overall, Marlene provides an entertaining and fairly accurate portrait of a complex and captivating woman.

Bárbara Mujica is a professor of Spanish literature at Georgetown University and a novelist, short-story writer, and essayist. Her latest novel, I Am Venus, explores the identity of the model for Velázquez’s Rokeby Venus. Her previous fiction includes the international bestseller Frida, based on the relationship between Frida Kahlo and Diego Rivera, and Sister Teresa, based on the life of Teresa of Avila. She is the faculty adviser of the Georgetown University Student Veterans Association, and many of her recent short stories derive from the experiences of the veterans she works with. One such story, “Jason’s Cap,” received first prize in the Maryland Writers’ Association international fiction competition in 2015. In 2016, her story “Ox” won second prize. Mujica’s essays have appeared in the New York Times, the Washington Post, Commonweal, and hundreds of other publications.