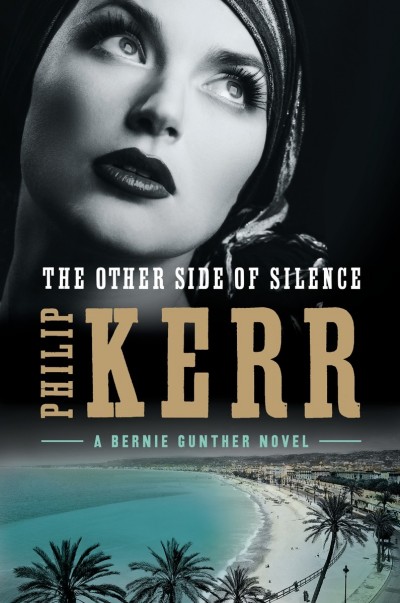 Troubled gumshoe Bernie Gunther is not doing well at all. Living under an assumed name as a French hotel concierge in 1956, he’s been dumped again, and trudges through life trying not to remember the past or anticipate the future. Unfortunately, this does not make for an enlightened Ram Dass Be Here Now-flavored existence. It’s actually the weary worldview of a man who’s pretty much done with this whole living thing. Gunther seems as low as we’ve ever seen him — and this is a man who spent two years in a Soviet labor camp after World War II.

The plot of Philip Kerr’s new Gunther novel, The Other Side of Silence, a tangled and engaging web of Cold War crimes of espionage with roots in 1940s Germany, revolves around a fascinating cast of characters led by the very real writer W. Somerset Maugham. As usual, Kerr appears to have done masterful research on people, places, and geopolitical issues. In particular, his author’s note at the end of the book reads like the first chapter of a nonfiction work I’d preorder on Amazon.

I do have one quibble, though I should probably give him the benefit of the doubt: I’d always had the impression that Maugham was less coarse about his homosexuality even in private than Kerr portrays him here. Still, it’s an entertaining portrait of a fascinating writer, now physically reptilian in old age, with a lizard’s tongue and the mind of a venomous snake ever ready to uncoil. In other words, a great character in a book.

Kerr’s sardonic humor keeps both Bernie and reader from going over depression’s cliff. A quick example. Here’s Bernie riffling through the lodgings of a suspect: “On top of a chest of drawers was Hebel’s own portable Grundig tape machine. I switched on and listened to a minute or two of bebop jazz, which I find is usually more than enough. There was an address book and a diary and a toilet bag filled with an optimistic number of condoms.”

It’s character, not plot, that drives the best in this genre. Actually, it’s not even fair to straitjacket those at the top of their game with any label except good book. Quick, how many intricate storylines and whodunit-reveals can you recount from any Dashiell Hammett, Arthur Conan Doyle, or Agatha Christie novel? Now describe Sam Spade, Sherlock Holmes, or Hercule Poirot. See?

Bernie holds his own in the company of intriguing detective personalities. He’s more interesting than any of his stories, and that’s not meant as an insult. Kerr has introduced us to a new, flawed, and, in many ways, more genuine (and transparent) character than almost anyone we might know in our 3-D lives. No easy task, that.

I had the chance to interview Kerr last year on his publicity tour for the previous Bernie book, The One from the Other. He said he never had any intention of writing a series. It was only the feedback he got from the first, March Violets, and the publisher dangling a two-book contract for sequels in his face that kept Bernie alive. I’m not sure whether Bernie would agree, but the rest of us are lucky it worked out that way.

After Bernie’s tough travails in the new story, the reader is rewarded with a bit of optimism, too. While Silence’s first line — “Yesterday I tried to kill myself” — is foreboding and chilling with the stamp of suicide, at the end we’re told, in a bit of a James Bond touch, “Bernie Gunther will be back in 2017 with Prussian Blue.” I hope Bernie is as pleased about that as I am.

Children of the Ghetto