“The Only Unavoidable Subject of Regret”: George Washington, Slavery, and the Enslaved Community at Mount Vernon

An historian plumbs the depths for a candid look at America’s first president and his participation in its worst institution. 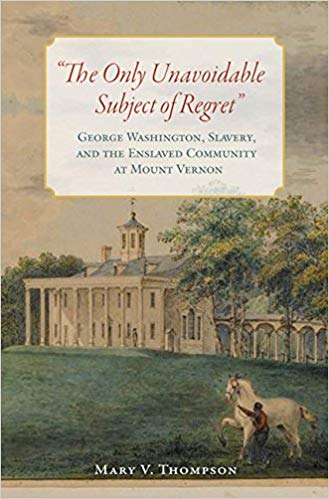 Drawing upon decades of research and writings as staff historian at Mount Vernon, Mary V. Thompson has, in “The Only Unavoidable Subject of Regret,” produced a superb, moving portrait of the plantation's enslaved community. Thompson's admiration for George and Martha Washington is strong, but her focus is on the enslaved, whose stories she tells vividly and without sentimentality.

The power and precision of her narration of backbreaking, soul-testing farm life may have been informed by her own background, mentioned in the endnotes: Thompson's mother grew up in a log cabin on a tenant farm in Arkansas during the Great Depression.

Thompson describes George Washington as a "hands-on" manager. Public service in government and the army kept him away for 20 years. To a degree, he tried to impose a version of military organization on his plantation. Enslaved workers who performed well received cash or allotments of higher-quality cloth than the less productive.

Hoping to use "pride" as a motivation, he offered Cyrus, who was considered a troublesome slave, promotion to the household staff, with all the perks that entailed, if Cyrus would mend his ways. And he did.

But the author does not shrink from showing Washington at his worst. She raises the possibility that a young, unmarried Washington might have had sex with a slave. She describes Washington angrily slapping an enslaved carpenter hard enough to knock him out because the man failed a task that was simply beyond his strength.

In the army, Washington was compelled to approve executions. No slaves were put to death at Mount Vernon (though Thompson suggests there was at least one suicide), but Washington did sell recalcitrant slaves to the West Indies, fating them for very hard labor and likely death.

Some of Washington’s overseers were cruel. One manager, James Anderson, suggested that a few blows from a rod could persuade the sick and injured to repair ditches and trim hedges. Washington's response is not in the record. He ordered that another overseer, Hyland Crow, not give whippings after Crow disabled a man with a beating.

Thompson offers examples of Washington's leniency and fairness, noting that some of the enslaved people approached him directly when they had complaints. He was slow to order whippings, and then only after an inquiry had proven guilt. He made every effort to save the eyesight of a 28-year-old slave named Tom, who was rapidly going blind from a tumor, sending him first to his own physician and then to a respected eye surgeon. Washington had no financial stake in saving the man's sight; he didn't own Tom but was renting him.

One particular, seemingly offhand insight struck this reader powerfully. As did most owners, Washington distributed clothing so infrequently that the people went about in rags. For those who have studied enslavement, this was a commonplace. Thompson goes a step further to say that torn and threadbare clothing left women half naked, exposed to every gaze.

Though Washington said he wanted his people adequately fed, in fact, they could not have survived on their rations. Because of that, the slaves stole the plantation's foodstuffs, including hogs and sheep, for their own consumption or for sale in the local Alexandria, Virginia, market, where they could buy sugar, cloth, and other "amenities."

Washington, like Thomas Jefferson, ordered slaves' dogs rounded up and hanged because slaves used the dogs to hunt the masters’ livestock. Slaves stole Washington's feed, fed it to their own chickens, and sold the chickens to Washington.

The thieving became so frequent and pervasive that Thompson finds a "siege mentality" emerging in Washington's directives. The slaves were going hungry, and Thompson points out that theft was a form of resistance to an unjust system. The enslaved resented their destiny as lifelong providers of wealth they would never share.

Eventually, Washington agreed with them. Calling slavery repugnant, he tried and failed at least twice in the 1790s to free his slaves, eventually emancipating them in his will.

The author generously provided information and moral support to me personally when I was researching my own book on George Washington and slavery, An Imperfect God, though our views did not always align.

I wrote that Martha Washington, determined to preserve her grandchildren's wealth and lofty social status, stymied her husband's 1795 attempt to free Mount Vernon's African Americans. Thompson, however, declines to fault her. Portraying Martha as a kindly, even beloved mistress, Thompson discounts her remark that "blacks are so bad in [their] nature that they have not the least [gratitude] for the kindness that may be [showed] them."

Thompson is straightforward about the cruelty the enslaved endured under Washington's regime. But, in her conclusion, the author expresses the hope that telling this "difficult and painful story" will spur interracial healing and understanding because "it is also a story of progress and change for the better."

George Washington underwent a gradual transformation until he saw that slavery was irredeemably wrong and had to be expunged from the republic. Perhaps the “unavoidable subject of regret” is that the rest of the country, and Washington's own family, did not follow his lead. Mary Thompson has eloquently chronicled the lives and struggles of the people who not only survived slavery but passed courage and hope to the generations to come.

Henry Wiencek is the author of The Hairstons: An American Family in Black and White, winner of the National Book Critics' Circle Award in Biography; An Imperfect God: George Washington, His Slaves, and the Creation of America, winner of the Los Angeles Times Book Prize in History and the Best Book Award from the Society for Historians of the Early American Republic; and Master of the Mountain: Thomas Jefferson and His Slaves.