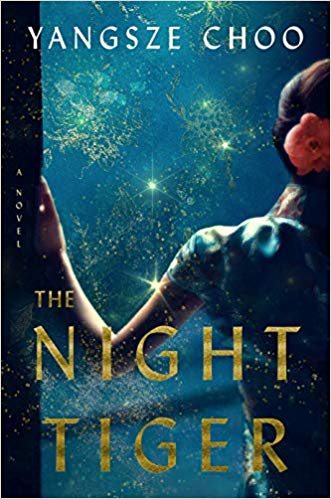 To her credit, Choo manages to intertwine all these plots and subplots with themes of superstition, Confucianism, and the desire for personal fulfillment versus the tug of familial loyalty. Altogether, a bravura performance.

Set in 1931 Malaya, when Malaya (today’s Malaysia) was part of the British empire, The Night Tiger creates a world where wild beasts snatch victims in the night, numerology and homonyms impact key decisions, and dancehall girls adhere to a strict code of conduct while feigning interest in lonely men.

The story begins when Ren, an orphaned houseboy charged by his dying master with finding the master’s severed finger, sets out on his quest. Forty-nine days is all Ren has to locate the finger and bury it so that his master’s body will be complete, and his ghost won’t wander the earth forever.

Crisscrossing Ren’s tale are those of William Acton, a philandering surgeon who becomes Ren’s new employer, and Ji Lin, a young woman chafing under her limited horizons as a dressmaker’s apprentice. Time and again, the missing finger passes among them: surfacing, then becoming lost again, then found, then stolen, then buried, and finally reburied.

Ren, William, and Ji Lin grapple with their own demons and with unseen forces they dimly sense operating just beyond the scrim of their own understanding. Each named for one of the five Confucian virtues — in this case, wisdom, benevolence, and order — the three search for the finger, but also for the namesakes of the two remaining virtues: integrity and righteousness.

It’s this latter quest that leads them to a greater understanding of themselves and their relation to the other, thus-far-unknown members of their nascent Confucian quintet.

Choo’s skill in creating a dynamic, vibrant, non-Western cosmos rivals that of Chimamanda Ngozi Adichie in Half of a Yellow Sun. Both authors open their books with a houseboy who serves as an objective onlooker while his own story unfolds. Both stories employ twins who become separated, and both have as their principal character a smart young woman.

In The Night Tiger, that character is Ji Lin — hers is the only story told in the first person. Named for the Confucian virtue of knowledge, Ji Lin is smart but not wise. She consistently acts impulsively, gets herself into dangerous situations, and misinterprets other people’s intentions, especially those of her stepbrother. Gradually, Ji Lin acknowledges her contribution to her own difficulties and achieves a measure of self-knowledge:

“My own choices — working at a dance hall, getting mixed up with a dead man’s finger, and telling lie after lie — could hardly be called wise, despite my supposed cleverness at school.”

Sadly, this insight comes two-thirds through the story, at a point where Ji Lin’s almost willful purblindness has begun to sound deliberately disingenuous.

Ren is a more sympathetic character, partially because his child’s sensibility is malleable enough for him to trust his instincts. When his twin, Yi, died, Ren lost his “beacon,” his “sixth sense.” But through a series of dream sequences in which he visits Yi, Ren regains what he calls his “cat sense” and begins to experience the world with acute hyperawareness:

“The dream recedes, like water flowing backwards, and most wonderful of all, his cat sense, that invisible, electric pulse which tells him about the world, is back, humming quietly in the background.”

Ren’s porous sense of reality (and Choo’s smart use of the present tense) gives his passages a propulsive vitality that grips the reader’s attention. Ren doesn’t know what is going to happen next, and neither does the reader. Conversely, Ji Lin relates her story in the past tense, but neither she nor the reader benefits from hindsight.

But perhaps this is just as well. Any probing self-analysis might have resulted in a more plodding novel, one that wouldn’t have been half as entertaining. As it is, readers may not be moved by The Night Tiger. But they certainly will be grabbed.

Patricia Schultheis is the author of Baltimore’s Lexington Market, published by Arcadia Publishing in 2007, and of St. Bart’s Way, an award-winning collection of short stories published by Washington Writers’ Publishing House in 2015. Her memoir, A Balanced Life, was published by All Things That Matter Press in 2018.