The Most Dangerous Man in America: The Making of Douglas MacArthur

A riveting, accessible biography of a complex character from American history. 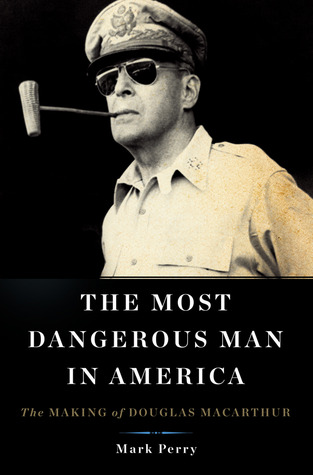 Successfully blending judicious writing and editing, Mark Perry’s new take on General Douglas MacArthur in The Most Dangerous Man in America proves that a biography does not have to be a tome to be good. Rather than focusing on MacArthur’s entire life, Perry concentrates on his involvement in World War II, simultaneously providing insights into his behavior and filling in needed and appropriate biographical nuggets in order to illuminate his bigger than life persona.

The Most Dangerous Man in America weaves multiple themes about waging war and military behavior by examining the operational aspects of World War II. The war MacArthur oversaw in the South Pacific differed from the one waged in Europe. Without directly stating it, Perry contrasts the way Dwight Eisenhower, a protégé of MacArthur, ran the war in Europe with the issues MacArthur confronted in the Southwest Pacific. Eisenhower’s deft people skills were needed to conduct a war council consisting of other high ranking officers from the Allied nations (principally, Great Britain), and MacArthur contended with inter-service rivalry between American naval and army forces. If Eisenhower’s great foil was General Bernard Montgomery, then MacArthur’s was Ernest King, chief of American Naval Operations.

Even though battle buffs will find the description of combat a bit limited, readers will not be disappointed in the compelling scenes of house-to-house fighting, used to remove Japanese forces from Manila. People often associate World War II and house-to-house or street-to-street fighting with the war in Europe, but Perry shows readers an overlooked aspect of this urban warfare: When MacArthur returned to the Philippines, he discovered plenty of nasty fighting and carnage.

From the outset of the book, Perry depicts MacArthur in a sympathetic light. Perry points out that a public opinion survey taken in the United States in the late 20th century ranked MacArthur as the least liked American general after Benedict Arnold, but Perry also acknowledges that some of this dislike may have arisen from President Harry S. Truman’s eventual dismissal of MacArthur during the Korean War and from subsequent biographical historiography of the general after his death, which was often supported by MacArthur detractors.

Yet Perry’s biography is balanced and devoid of boosterism for his subject. He recognizes the flaws of his subject, but places them in context with larger global political and military frameworks. Like most great men, MacArthur proved to be his own worst enemy; he surrounded himself with sycophants. Perry’s easily accessible prose brings these people to light, and Perry admits that MacArthur courted his own set of boosters.

The title of this biography draws on MacArthur’s unusual relationship with President Franklin D. Roosevelt, who claimed that MacArthur was “the most dangerous man in America.” Most pundits at the time believed that MacArthur had his eyes on the Presidency, but Perry argues that MacArthur, a darling of the Republicans, really wasn’t interested in political “things.” Coy in his dealings with MacArthur, Roosevelt set out in the early stages of World War II to “tame” his mercurial Pacific commander, and MacArthur, in a prescient manner, developed a grudging respect for Roosevelt because of what the president did not say about him.

Despite his flaws, MacArthur clearly was a man of his word. In 1942, as directed by the president, he left the Philippines — then an American territory — in a cloak-and-dagger mission to run the war from Australia. MacArthur’s greatest single mission then became his “return” to the Philippines, and his life was consumed with determining ways to push the Joint Chiefs of Staff in a direction that would allow for his redemption in retaking the Philippines.

Frustrated with the Roosevelt Administration’s “Defeat Hitler First” policy, MacArthur constantly cabled his superior, General George C. Marshall, to support his belief that the United States had a moral imperative to support his pledge to the Philippine people. After spending several years in the Philippines, MacArthur fully believed that the United States needed to grant this island territory its independence, and American forces’ inability to defend the Philippines against the Japanese military machine’s onslaught broke his heart. As a result, he had to contend with an unfair moniker of “Dugout Doug,” which haunted him until 1945 when he waded ashore in the Philippines and announced, “People of the Philippines, I have returned.”

The Most Dangerous Man in America is a noble portrait of an often misunderstood and complex 20th-century American. As an assiduous student of history and a military strategist and tactician, MacArthur was drawn to the legacy of Genghis Kahn, and he looked to the Mongolian leader for inspiration in his own operational planning during World War II.

In addition, MacArthur’s flair for history combined with his sense of personal drama led to iconic moments during World War II, such as his famous return to the Philippines and his carefully orchestrated Japanese surrender proceedings in Tokyo Bay aboard the USS Missouri. Without diminishing the humanity of the book’s central protagonist, Perry captures the conundrum of being a great man and presents a story that is full of its own kind of romance and adventure.

James A. Percoco is the Director of Education for the Friends of the National World War II Memorial, the author of Summers with Lincoln: Looking for the Man in the Monuments, and a member of the National Teachers Hall of Fame.

Our Symphony with Animals