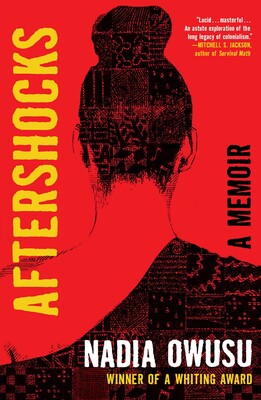 Imagine a childhood of travel and privilege, of comfortable homes behind high walls, of chauffeurs and servants, of exclusive education and the adoration of a doting father. Now imagine that world being shaken and cracked, broken by immense losses and the grief that comes with them.

Imagine making your way across the fault lines of this childhood only to come face-to-face with an unsubstantiated yet devastating secret and to live through tragic world events and personal, debilitating despair. Such is the stuff of Nadia Owusu’s stunning new memoir, Aftershocks.

Owusu was born in Dar es Salaam, Tanzania, to a Black Ghanaian father and a white Armenian American mother. Her father worked for the United Nations, and this allowed the family to live what should have been a good life. But when Owusu was 3 years old, her mother left her father and their children.

After that, Owusu lived in England (twice), Italy (twice), Ethiopia, and Uganda, and finally settled in New York at 18. The feeling of discovery and an expansive worldview combined with a sense of displacement and otherness borne from such a life on the move would make this book an engaging and fascinating read, but there is more to it than that. It is the death of Owusu’s father when she was 13 and the aftershocks from this immense loss that further complicate an already complex and compelling narrative.

Owusu tells us, “Sometimes I think my memories are more about what didn’t happen than what did, who wasn’t there than who was. My memories are about leaving and being left. They are about absence.”

And how could they not be? A mother abandoning the family when Owusu was a toddler, a father dying not so long after, an uprooting from one place to another and another, a confrontation with a sometimes loving, often cruel stepmother who shakes Owusu’s world with a claim that forever tilts the ground on which she has built her memories — these things and others create recollections broken and reformed, pieces and details lost in the gaping chasms of what was.

This is not a trauma memoir, although trauma was suffered. Instead, it is a collection of recalled personal moments (among them, her close encounter with the attacks of 9/11) interspersed with family history and Ghanaian and Armenian history, reflections on faith (“Atheist? Agnostic?” she writes in a brief chapter called “Resettlement Registration Form”), and mental health (the book is dedicated to “mad black women everywhere”).

These things overlap and suggest a layered awareness that can both harm and heal. Owusu reminds us that culpability and transgression live side-by-side with better things. She suggests that history is more than a story; it’s a collection of many stories that “billow all around us like copper-colored dust that sometimes obscures everything.” Stories we use to find our way. Stories that present “Destruction and creation. Changes in light, terrain, and atmosphere. Delicate new freedom. Hope.”

At times, the memoir is lyrical, and other times, told with straightforward scenes and narrative techniques. Some readers might long for more story, for the writer to more fully tell these scenes and plumb those experiences. This is not that sort of book. It is as much an exploration of Owusu’s interiority as a retelling of anything she observes or does.

At the heart of the memoir are sections called “The Blue Chair.” Owusu finds a discarded and frayed blue rocking chair on one of her long walks in New York City after her stepmother has visited and delivered a disturbing secret (or lie) about her father’s death. The chair reminds Owusu of her father, of the rocking chairs they had in every house where they’d lived as a family.

She drags the chair home, and it becomes a place in which Owusu can settle, where her story is both its most frenzied and its stillest. Anguish drives her to a self-imposed isolation behind the closed door of her bedroom, and she sits in the chair for seven days, searching her mind and her memories in order to understand her pain more deeply, exploring her body for some path to relief.

Owusu moves forward and back in time and memory and uses seismic activity as both a central metaphor and organizing device. The foreshocks and main shocks and aftershocks of her story create an unsteady and surprisingly satisfying, shifting narrative. These seismic, shock-named sections combine with one titled “Topography,” and two others, “Faults,” and “Terraforming.”

These sections are not unlike Elizabeth Kubler-Ross’ five stages of grief, and Owusu navigates the stages of seismic disturbances and their effects as one suffering loss might: wandering among the rubble of what is broken and what is left behind, searching — sometimes in hope, sometimes in fear — for what is yet to come.

Recent writings on grief name a sixth stage: “Finding Meaning.” This aligns with the final section in Owusu’s story, “Terraforming,” which she defines as “literally, earth-shaping: the hypothetical process of deliberately modifying the atmosphere, temperature, surface topography, or ecology of a planet, moon, or other body to make it habitable.”

It is this, then, Nadia Owusu’s earth-shaping, that pulls the elements of this memoir together. It is her terraforming that allows her — and by extension, her readers — to inhabit this world of Aftershocks.

Patricia Ann McNair is an associate professor in the English and Creative Writing Department of Columbia College Chicago. Her most recent story collection, Responsible Adults, was a Legacy Series selection by Cornerstone Press. Her story collection The Temple of Air was named Chicago Writers Association Book of the Year, and her memoir, And These Are the Good Times, was a Montaigne Medal finalist.