The Mockingbird Next Door: Life with Harper Lee

The notoriously reclusive author opens up to a visiting journalist. 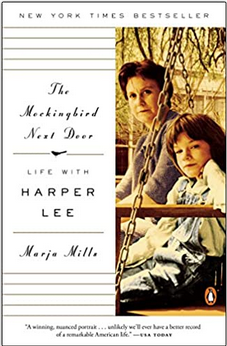 In 2001, the Chicago Tribune assigned an out-of-town story to Marja Mills, an investigative journalist and member of the Tribune team that won the Pulitzer Prize the same year. The Windy City’s 78 libraries were about to inaugurate “One Book, One Chicago,” a project intended to unify a concentrated coterie of citizenry around a single book, with simultaneous readings and discussions. Their selection was Harper Lee’s To Kill a Mockingbird. Mills’ editor directed her to Monroeville, Alabama — Lee’s hometown — with formidable instructions: “experience” the place and, if possible, reap an interview with the author. So far, few had succeeded in such missions.

It was also the 41st anniversary of To Kill a Mockingbird‘s publication. The library system had ordered 2,000 copies — in English, Spanish, and Polish — to satiate the anticipated upsurge in demand. Feeling celebratory, Mayor Richard Daley surprised his constituency when he revealed that the book was one of his favorites. Harper Lee had also been invited to the festivities, but she declined with uncharacteristic courtesy. Usually, as Mills later reported, “responses to the never-ending requests for interviews ranged from ‘no’ to ‘hell no.’”

Now, more than 50 years after its appearance, Lee’s Pulitzer Prize-winning novel continues to retain its popularity. With 40 million copies sold in 36 languages “from Swedish to Urdu,” To Kill a Mockingbird remains required reading for 70 percent of high school students and a perennial preference among book clubs.

For Lee, however, the early ‘60s push-out for the book and movie was tedious and nearly intolerable. By 1965, she was confident To Kill a Mockingbird had been parsed, prattled, and photographed enough but her decision to detach from the public backfired. Lee resolved to re-create her anonymity, but the public had an unusually high curiosity about her. Except in Monroeville. There, “Nelle” was already recognized as A.C. Lee’s daughter, and Alice Lee’s little sister — not an unexpected writer-sensation.

Fame didn’t come to the New York-based BOAC airlines reservation clerk until she was 34, but, by then, the townspeople were either unmoved by it, or they kept a proud, but respectful distance. In the coming years, a plethora of authors, filmmakers, and directors would attempt to call, but the unwanted attentive speculation — about her private life and Book Number Two — caused her more rancor than re-examination.

Each time Lee declined an interview, someone else was waiting to make the same request. Mills writes, “As the novel’s cultural influence grew, so did Lee’s mystique. A few years after the book was published, she essentially stopped giving interviews. The second novel she had once discussed never appeared…”

Soon after her arrival in Alabama, Mills found the sisters’ home. Alice, then 90, and a full-time lawyer, answered, and welcomed her in. Conversation, an introduction to fried green tomatoes, and a favorable report of the encounter from Alice to Nelle followed. The next day Mills and Lee met at the Best Western.

It was the start of a gradual friendship — interrupted only intermittently by Mills’ episodic bouts with lupus. By 2004, the sisters were in agreement with Mills’ decision to rent the house next door, which she did for more than a year. During that time, she interviewed them and their friends — repeatedly — for a book project and, according to Mills, with their sanction. Mills was included in their whirl of social activities: coffee at McDonald’s and Burger King; trips to the Excel Laundromat; fishing outings, duck feedings, drives through the small towns of Burnt Corn and Scratch Ankle; dinners at David’s Catfish House, Radley’s, and the Laredo Grill, along with home-cooked meals.

Mills catapulted into an alliance with the Lees because they viewed her as “quality.” Sometime during their conversations, Nelle, a longtime admirer of true crime stories, revealed she had spent more than a year during the 1970s researching a book about a murder spree in Alexander City, Alabama. Then, she stopped. Lee had “uncovered information she believed put her in personal jeopardy,” and transferred her notes to a writer at Auburn University to complete. But he jettisoned the project, as well. When Mills asked about his identity, Lee was evasive, and the subject was not pursued.

Mills maintains that she adhered to the Lees’ strict rules of generally “tailored” telling and, as a result, didn’t question the women aggressively or attempt to extract any deep revelations from them. Now, after 13 years of connection with Mills, Harper Lee has angrily denied she ever cooperated with the journalist. Alice drafted a consent letter for such cooperation, but it was never signed.

But the story’s tenor of tenderness and love belies Harper Lee’s denial, as does the breadth of assistance Mills garnered from the Lees’ loyal friends. It seems likely this situation is an intricate medley of Lee’s chronic fear of trespass and belated complications from a 2007 stroke and other miscellaneous maladies associated with reaching the age of 88.

There are many other stories Harper Lee could have written, but instead, she devoted nearly half a century to dashing opportunities to publish beyond the Mockingbird phenomenon and dodging occasions to be available. Fortunately, in The Mockingbird Next Door, Mills has managed to offer readers a fuller glimpse of Lee, miniaturizing a bit of the author’s mystique in the process.

And just in time.