Paying with Their Bodies: American War and the Problem of the Disabled Veteran

An unflinching look at the true cost of battlefield bloodshed. 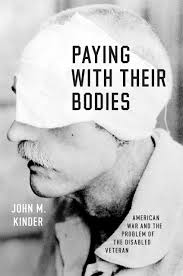 This is a book I didn’t want to read. I didn’t need to be reminded of the human carnage that war inflicts. I’ve never forgotten. But John Kinder wants his readers to face the cost of war head on. As he says in the introduction, “Modern war is about many things, but its most defining feature is the rupturing, wounding, and destroying of human bodies.”

The book starts with the story of U.S. Army staff sergeant Christian Bagge, an Iraq veteran who lost both legs in a roadside bomb attack. In the summer of 2006, he and President George W. Bush jogged together on the White House lawn. The event made headlines, and pictures of Bagge’s “metallic, comma-shaped prosthetics gleaming in the afternoon mist” were published by news agencies and appeared on websites around the country. Military officials asked Bagge to wear long pants at his Purple Heart ceremony. Defiant, Bagge wore shorts.

The rest of the book is a chronicle of the U.S.’ handling, and often mishandling, of the Problem of Disabled Veterans — Kinder capitalizes these words throughout — from the Civil War through the wars in Iraq and Afghanistan.

Despite variation in emphasis, the same social issues reappear like eerie echoes during and especially after each war. And as medical technologies improved, the number of surviving wounded increased, as did the size of the Problem. Our expectation that modern science would solve the Problem was wishful thinking.

Our history, as Kinder portrays it, is replete with our glorification of individualism, masculinity, and war. The specter of wounded soldiers, some without arms or legs, “basket cases” without either, or hideously disfigured, does not align well with these worldviews.

During and following each of our wars, we have dealt with the unpleasant realities by hailing our disabled veterans as heroes and emphasizing the success of rehabilitation while scrimping on the funding needed to care for the wounded. Or we have deliberately forgotten and hidden the human wreckage. Inhabitants of more than one town have complained about seeing disabled soldiers on the streets and have requested that they be required to remain behind closed doors.

The problem persists. “Nearly a century after the Great War’s end,” Kinder writes, “disabled veterans remain a suspect class, marginalized even by those charged with their care.”

The financial cost to the nation of caring for disabled veterans is a recurring issue after each war. The public is generous immediately after the war’s conclusion, but gets impatient with the cost in the years that follow. The tendency is to celebrate veterans with public exhibitions — parades, ceremonies, monuments — but to cut funds set aside to care for them.

And the Problem of the Disabled Veteran clashes with pro-war propaganda. Kinder quotes journalist Aaron Glantz: “The sorry state of care for Iraq and Afghanistan war veterans is not an accident. It’s on purpose. After the invasion of Iraq in 2003, the Bush administration fought every effort to improve care for wounded and disabled veterans. At the root of that fight was its desire to hide the true costs of the war in order to boost public support.” This is the same Bush who jogged with Bagge to public acclaim.

Kinder focuses on World War I as the pivot point in American thinking about the war disabled. Some 200 pages of the book address the Great War and its aftermath, up to the beginning of World War II. Before the war, Americans tended to think of the war wounded as people with a problem they needed to solve themselves, not as a national issue.

But the magnitude of wounded after the war captured the attention of the nation. Organizations like the American Legion (of which I am a proud member) and Disabled American Veterans appeared. The ever-present disabled vet colored American views of war in contradictory ways. Pro-war and anti-war propaganda exploited pictures of the disabled. Kinder professes that the U.S.’ multiple attitudes on the Problem of the Disabled Veteran today are still shaped by the shadow of World War I.

I am persuaded by Kinder’s thesis. The unmistakeable similarity of propaganda, events, and expressed viewpoints after Korea, Vietnam, Iraq, and Afghanistan to those following World War I points to his conclusion.

For all that, I felt slighted that he spent so little time on Vietnam, my war. I was galvanized by his writing about the wounded following Vietnam — I read it twice — but ended up convinced that attitudes following that war were indeed echoes of those following World War I.

Kinder writes more like a sociologist than an historian, and his documentation meets the highest academic standards — 41 pages of detailed footnotes. And the text was peer-reviewed as befits an academic history. But the sheer excellence of the writing and Kinder’s reliance on factual vignettes — e.g., the Bagge story — give the text a sensuous immediacy. Kinder shies away from war pornography, but he refuses to gloss over the gruesome effects of battle.

This is factual reality writ large. Yet through it all, he maintains the scholastic neutrality requisite for academic writing. If a judgment is clearly needed, he offers one from another writer. The result is far more moving than inflammatory writing could be: The brutal facts speak for themselves. Kinder includes some 40 graphics with extended captions throughout the text. They give the book a gritty realism words alone could not.

I was gratified that Kinder gives Post-Traumatic Stress Injury (he calls it PTSD, “Disorder” rather than “Injury”) its due even though we, as a nation, do not. As Ron Capps, author of Seriously Not All Right, once wrote, “In World War I, soldiers with blood and bone wounds were authorized a wound stripe on their uniform and a pension; soldiers with Shell Shock, the term of art in use then, were not…Today, blood and bone wounds warrant a Purple Heart medal, PTSD doesn’t. It’s important to remember that…a moral injury is a combat wound.”

In some ways, as Kinder notes, we have progressed little in the last hundred years.

I was left at the end of Paying with Their Bodies with the gnawing question implicit in the book: Is it worth it? What have we gained by our wars that counterbalances the monstrous death and disfigurement inflicted? At what point do war’s dividends of destroyed bodies and minds outweigh the gains? Kinder leaves us to answer these question for ourselves.

Tom Glenn spent the better part of 13 years under cover in Vietnam collecting intelligence to assist U.S. forces and escaped under fire from Saigon when the North Vietnamese were already in the streets of the city. He is the author of 16 published short stories. His novel Friendly Casualties was published in 2012. Apprentice House brought out his No-Accounts last year and will publish his The Trion Syndrome this year.