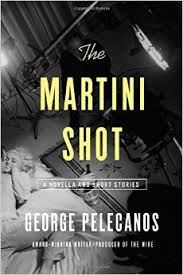 You have to admire a writer who can craft sex scenes as lean as Shaker furniture and still make readers sweat in the middle of winter. Of course, Washington, DC, novelist George Pelecanos is famous for penning potent crime-novel prose that reveals the impurities of our collective psyches, so it should not be surprising to find him writing racy passages about matters of the flesh. Like Elmore Leonard, Pelecanos is a masterful storyteller who makes his work look as effortless as recounting a crazy-ass day to his bar buddies.

So, yes, The Martini Shot, the novella from which Pelecanos' first collection of short stories takes its name, opens with sex in a hotel between two people, Victor and Annette. It's the kind of Merlot-induced lovemaking, carnal and unencumbered, that other guests hear through the walls. The opening passages quickly reveal the Pelecanos gift: luring readers into worlds that are at once familiar and antithetical to our cloistered lives.

We soon learn that Victor Ohanion is a TV screenwriter and producer; his lover, Annette, works on the same cop drama as a designer. Both are single but married to the vagabond life of on-location work. This is their late-night routine after the daily shoots wrap. She loves the guy. But Victor, the laconic lug, isn’t quite sure about his heart, a muscle that takes longer to convince due to his gender.

Pelecanos leaves the streets of DC that we've seen in books including Shame the Devil and pulls back the tattered curtain that hides the circus life of those who toil on weekly TV shows (“If it happens on location, it didn't happen”). This is a churn Pelecanos knows well as one of the principal writers for “The Wire” and “Treme.”

Fourteen-hour days are routine, with lousy food and preening actors on their way up or down and, abruptly, out. Victor has learned that survival means literary concession and compliance. After writing cop patter for so long, he's given up on making scripts interesting. Dreams of becoming a novelist are long gone. The reality for Victor is a refreshing self-awareness: “I had become a writer, in a manner of speaking. But mainly I was a well-paid hack.”

This is where Pelecanos injects his inimitable twists to the story. Since Victor feels fairly blasé about his professional life, he embarks on an attempt to solve the murder of a young stagehand while they’re filming in a Louisiana backwater. It turns out his colleague had been selling weed on the side and had gotten into debt with his suppliers. In crime-novel parlance, he gets whacked at a club, and his girlfriend is in danger of the same fate.

Because Pelecanos has a smaller canvas with The Martini Shot and the short stories in the collection than with his novels, he concerns himself with broad character sketches and the hard facts of crimes and misdemeanors. The most heartbreaking is the book’s opening salvo, “The Confidential Informant.” We’re back in DC with a 20-something named Verndon who lives with his parents and, unlike his successful lawyer brother, has seen his life unravel via a series of bad decisions (mostly related to vodka and drugs) and dead-end jobs on Georgia Avenue.

We follow him trying to earn money as a police informant, collecting $20 here and there. When a young Lothario is murdered, Verndon knows the culprits. When he devises a way to cash in, Pelecanos reminds us that the forces that seem to control our lives — influenced by decisions, past and present — can be as clever as they are cruel. The same reminder arrives in “Plastic Paddy,” a gut-punch of a story about a cocaine deal gone awry in Prince George’s County.

And then there’s Victor, the screenwriter and producer in The Martini Shot who’s amazing in bed. While the premise seems a little too 1985 — I wish the stagehand were selling something more insidious, like meth — Pelecanos manages to place Victor in the crosshairs of danger. The career screenwriter figures he can do a better job than the cops, so he attempts to unravel a murder in 24 hours — all while using a prop gun from the set.

Unfathomable? Well, sure, but this is Pelecanos driving the literary squad car, so it’s a good ride. Victor — and all of the other characters who populate the book’s short stories — is no different from many of us. He’s trying to square his reality with his dreams.

Pelecanos explores this calculus of the human condition with grace and grit, no matter what the tale. Perhaps this is why millions of readers continue to follow the crime writer down many dark and unseemly alleys.

Michael McCarthy, a third-generation Washingtonian, is the editor-in-chief of DC Modern Luxury magazine.