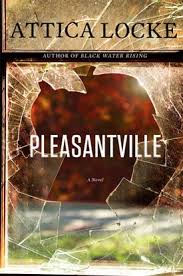 A common selling point for the sorely missed HBO series “The Wire” is that it’s the closest television has ever come to feeling like a novel. Attica Locke’s Pleasantville is that novel.

Like the best thriller writers — your Dennis Lehanes, Tana Frenches, or Gillian Flynns — Locke’s books have central mysteries, but that’s never what they’re really about. Her last novel, 2013’s The Cutting Season, was ostensibly about the body of a migrant worker turning up on a historic plantation’s grounds, but it was really about far more: motherhood, immigration, and white America’s strange compulsion to romanticize the antebellum South.

Similarly, Pleasantville begins with Alicia Nowell, a young African-American woman in Houston, vanishing on the eve of the city’s 1996 mayoral election. The candidates are headed for a runoff. One, Axel Hathorne, is a popular former police chief and a scion of the de-facto royal family of the titular middle-class black suburb. The other is a white star prosecutor who’s recently engaged the services of a campaign dirty trickster — who herself has caught the eye of one Karl Rove, a close advisor of the state’s ambitious governor, George W. Bush.

When Alicia’s body is discovered and Axel’s nephew and campaign manager is arrested, Jay Porter (the protagonist of Locke’s debut, Black Water Rising) takes the case. Jay is a widower who made his bones as an environmental lawyer, but his major victories have been tied up in appeals for years, and he’s hemorrhaging clients frustrated with the slow-turning wheels of justice.

Getting involved in a case this politically charged is exactly what Jay doesn’t want, especially if it means going to trial. But like a lot of aging, disillusioned men in a lot of stories before him, he can’t walk away from one last job.

This all sounds fairly straightforward, as is (disappointingly) the truth behind Alicia’s fate. But far more complex is what occurs along the way, a gripping examination of grief, single fatherhood, the individual’s responsibility to their community, and the toxic brand of hatchet men disguised as moralists who dominated American politics in the late 1990s.

A key part of Jay’s arc in Black Water Rising was his transition from ‘60s campus radicalism to white-picket-fence adulthood, and the lingering revolutionary spirit that kept him more committed to justice than prosperity. Pleasantville, then, is about the forces that killed — or, at least, sold out — the same black middle class he uneasily joined, and the collection of unstoppable forces and immovable objects that make up America’s institutions.

Themes aside, Locke (a writer and producer on the popular TV series “Empire”) creates a palpable sense of time and place without any “Al Capone dancing the Charleston on top of a flagpole” showiness.

And while this is Jay’s story through and through, she doesn’t use that as an excuse to skimp on the supporting cast, which includes a down-on-her-luck lesbian journalist; Jay’s ex-con private investigator; and Jay’s old flame, an erstwhile fellow activist who went another way when she came to the same crossroads.

But perhaps the richest supporting player is Jay’s daughter, Ellie, who could easily have been yet another stock rebellious teenager, one more cross for Jay to bear. But Locke colors her rebellion with compassion and fierceness. I’d snap up a later novel about what becomes of her, and given the 15-year gap between the two Jay Porter books (in the story, not in real life, thank God), it could happen.

Pleasantville seems ripped from the headlines amid a very public discussion of race, criminal justice, and the slow demise of the American dream, but it would be a quality book regardless. One hopes Locke has plenty of time to write during “Empire’s” off-season because, much like with “The Wire,” I haven’t gotten nearly enough of this story.

Zack Budryk is a Washington, DC-based journalist who writes about healthcare, feminism, autism, and pop culture. His work has appeared in Quail Bell Magazine, the Mary Sue, Jezebel, Inside Higher Ed, and Style Weekly, and he is currently working on a novel. But don’t hold that against him.

A Forgery of Roses

A young artist must hide her resurrective gifts or risk exposure — or worse.