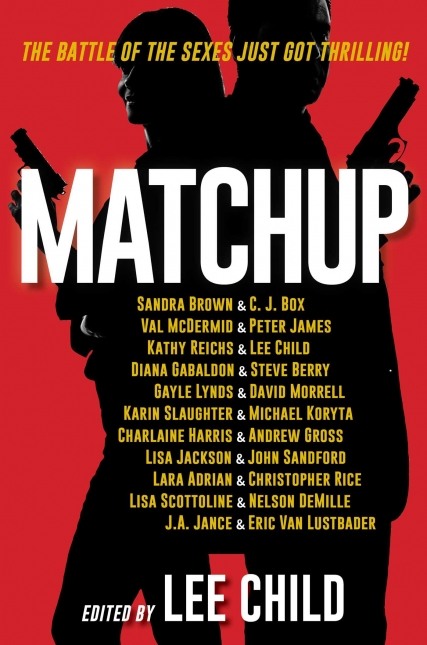 Committed thriller readers love their gumshoe heroes and heroines, and they return book after book, year after year, to the bestselling authors who feature these familiar (and comfortably predictable) protagonists. MatchUp, a new anthology of short stories edited by Lee Child, locks in on this immensely lucrative market, showcasing nearly two dozen of the genre’s top-performing writers.

Issued under the aegis of the International Thriller Writers, an umbrella group of commercially published authors, MatchUp has all the earmarks of a can’t-miss marketing gambit. It pairs 11 tag-teams of bestselling authors in original collaborations that feature their most bankable protagonists.

For the most part, this is a reprise of the selling proposition behind ITW’s 2014 anthology, Faceoff (David Baldacci, ed.), which also showcased a brace of first-stringers — including Michael Connelly, Dennis Lehane, Ian Rankin, Lynda Fairstein, and Peter James — in two-writer pairings. MatchUp adds a new wrinkle to this formula: Its author pairs — and frequently the protagonists featured in their stories — are male-female. Hence the breathless all-italic, all-caps banner on MatchUp’s dust jacket: THE BATTLE OF THE SEXES JUST GOT THRILLING!

For fans of the mystery-thriller format — not to mention curious readers intent on sampling MatchUp contributors for the first time —  here’s a partial roster of the name-brand authors and their characters that appear in the anthology:

All of the above are names to conjure if the mystery-thriller ethos is your cup of tea. Most of the stories hinge on spare, hard-driving narratives, standard fare in the genre. And a little surprisingly, most expend no creative energy on the inevitable getting-to-know-you tensions between their newly thrown-together protagonists. “Getaway” (Scottoline-DeMille) and the marvelously atmospheric “Dig Here” (Harris-Gross) are happy exceptions when it comes to this blind spot.

But, after all, why mess with too much character tinkering? Devotees of the genre already know their female protagonists are singularly smart, resourceful, and, more often than not, professionally successful as lawyers, doctors, or scientists. Conversely, their alpha-male heroes tend to be cops or ex-cops (and you can bet there’s always a story there). Many of these men’s men are go-it-alone types, prickly, taciturn, and smarter than they look.

As the capsule biographies that conclude MatchUp indicate, about half the anthology’s 22 contributors started out in other careers before the dream of writing commercially successful fiction finally took over. There are differing paths to creative success, to be sure, as thousands of “serious” fiction aspirants now toiling away in hundreds of graduate MFA programs will no doubt attest.

They, and many of us, may view the stories in MatchUp as throwaway narratives peopled with predictable characters, a la TV series and comic-book plots. Still, most of our MatchUp players have scores of successful bestsellers to their credit, and each can claim total sales numbering in the tens of millions and more.

They’re giving folks what they want. And we’re buying. And reading.