A delightfully witty tale of disparate characters caught in a Rube Goldberg-like narrative. 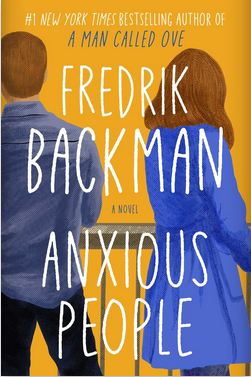 How do you follow up a sensational international bestseller like A Man Called Ove? Fredrik Backman does it spectacularly with the entertaining conundrum Anxious People. As equally idiosyncratic and iconoclastic as his debut, it is an outrageously hilarious, flawless novel about “how a bank robber failed to rob a bank but instead managed to spark a hostage drama.”

It is the most bizarre heist story since Sidney Lumet’s “Dog Day Afternoon,” with narrative nods to Ann Patchett’s Bel Canto and O. Henry’s “The Ransom of Red Chief.”

The dominoes start falling quickly when a bungled robbery turns into a mordantly serious situation. In many ways, it can be read as a locked-apartment mystery bonded with a unique variation on the police procedural.

After the 39-year-old robber mistakenly attempts to steal from a cashless bank in a small Swedish town, the culprit stumbles into an open house on the day before New Year’s Eve. Inside, a ragtag group of eight — a real estate broker and unsuspecting prospective buyers — soon becomes trapped in a Rube Goldberg construction.

Backman is sly. Nothing is as random nor as obvious as it appears. While he focuses on the current series of curious events in the apartment, he buttresses the character-driven plot with numerous backstories that link a bridge, suicides, and a peculiar drawing of a frog, a monkey, and an elk.

Then, just when it seems as though everything has been sorted out, he turns it all topsy-turvy with a stunning revelation that would be a major spoiler to disclose. It would also ruin the fun of discovery.

The two local detectives investigating the curiouser and curiouser case are father and son, Jim and Jack. They enter the daffy scene after the situation has ended. The supposed hostages have been released; there’s blood on the carpet; and the robbery suspect is nowhere to be found. With no experience with captor crisis, they rely on Google for advice. They disdain Stockholmers and the syndrome named after them.

A good portion of the novel consists of exuberant recorded transcripts of witness interviews with the visitors to the apartment. That includes Zara, a condescending bank manager in therapy for depression; Julia and Ro, a pregnant lesbian couple struggling with the possibilities of parenthood; Estelle, a flummoxed looky-loo neighbor; Anna-Lena and Roger, a long-married couple of property flippers who know IKEA furniture when they see it; Lennart, a rabbit (don’t ask — just accept him in his underwear and socks and go with it) who had his own motives for being there; and the real estate broker, who frequently refers to her cleverly named firm, House Tricks.

Backman juggles all of this with exquisite ease and his usual mellifluous style and grace. In the midst of the humor, he manages to inject poignant observations about life and death; love and marriage; parenting and divorce; and social and economic stress.

The resolution, when it comes, is unexpected but perfect. Justice is served. Anxious People is a joy to experience, an absurdist black dramedy and lasting treasure for Backman fans.

Robert Allen Papinchak is a former university English professor whose reviews and criticisms appear in newspapers, magazines, literary journals, and online including Publishers Weekly, the Los Angeles Review of Books, On the Seawall, World Literature Today, and elsewhere.

The Children’s Home: A Novel

This genre-bender is eerie and atmospheric but leaves way too many unanswered questions.