This spare, nerve-rattling tale — which has nothing to do with wild dogs — lingers long after it’s put down. 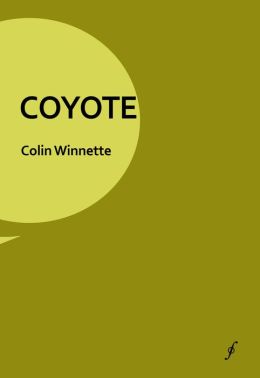 So begins Coyote, Colin Winnette’s jarring novella about a missing girl, a family’s despair over losing her, and a mother’s relentless descent into madness. At 96 pages (many of them nearly blank), the story’s size is dwarfed by its heft. Weeks after finishing, I still can’t shake it.

This question, from a disembodied voice, gets put forth throughout the tale. Sometimes the mother answers, sometimes the father. Sometimes no one. We never learn who’s asking, just as we never learn the parents’ names, the vanished child’s name, or the specifics of place or time. There aren’t even any quotation marks.

What there is, though, is a mounting sense of dread as the man and woman lash out at themselves and each other, drawing ever tauter and snapping strand by strand as the days go by.

Then a different missing child is found months after disappearing. Suddenly, there’s hope.

I dragged him into the living room and pointed at the television. There sat a family: mother, father, and daughter. The daughter was in blue and white like the Virgin Mary. She sat atop her mother’s lap.
He watched for a moment. His anger seemed to leave him like a flock of birds.
What am I doing here? he asked.
They found a girl, I told him.
He nodded, watched the TV.
They’re finding girls, I said.

But not their girl. At least not yet. Fractured weeks continue to pass, but she stays gone. The man grows ever more resigned; the woman, clawing with ragged fingernails, continues losing her grip. Each time their world erupts, the lava scorches them both.

He throws a hammer at the TV. They remain perpetually in limbo.

We slept on the couch together that night, her Dad and I. Or, truthfully, he slept with his arms around me and I stared for hours at the broken television. I looked out the window too, but I could only see a reflection of myself. There is…nothing worse than your own reflection where the rest of the world should be.

Nothing better than a short tale with the power to linger — and haunt — long after it’s put back on the shelf. Colin Winnette’s Coyote is one of them.

We had another bad night together. A particularly bad one. The kind of bad I couldn’t ignore…Some kinds of bad can’t be undone.

And some kinds of stories can’t be forgotten.

Holly Smith is managing editor of the Washington Independent Review of Books. Follow her on Twitter at @HSmithWrites.