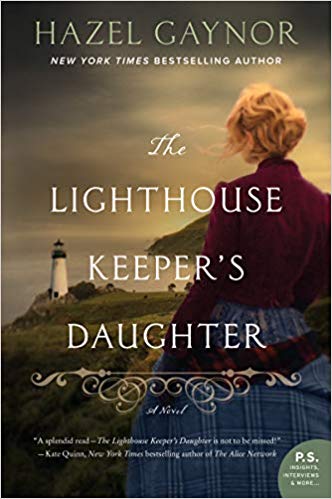 Just when you thought the oft-lamented trend of book titles framing the heroine in relation to her parents had run its course, another titular daughter comes along.

The “thus and such’s daughter” books find their place on shelves next to the “so-and-so’s wife” novels. The former is an improvement on the latter, but only by the slimmest margin, since the parent could be a mother. In all likelihood, though, it’s the father, thus perpetuating the vexing patriarchy we find ourselves living in.

It’s a shame, really, that it has become such an overused device that it sets off alarm bells for some readers because that spoils the conceit for books that may artfully make use of such titles.

This is the case for The Lighthouse Keeper’s Daughter by Hazel Gaynor. It’s the kind of historical fiction that launches a thousand Ancestry.com searches and sends readers to their favorite search engine mid-paragraph to find out who is and isn’t an actual historical figure. It’s also something of a feminist tome set in an era before its time, belying its title in a good way.

The Lighthouse Keeper’s Daughter toggles between two stories set a century apart. In the first, two women are thrown together when a very real disaster strikes the SS Forfarshire in 1838. The steamship had boiler problems during a storm and wound up scuttled on the rocks near Longstone Lighthouse along the Farne Islands off the Northumberland Coast of England.

Grace Darling, a name that sounds too good to be true, but is, indeed, was the lighthouse keeper’s daughter and became a famous figure when word spread of her heroic aid in rescuing the survivors of the wreck. Those included the sole female survivor, Sarah Dawson, whose two young children perished in her arms.

It’s a gut-wrenching drama with all too real human consequences, a true tale that sits at the heart of this novel. In her imagined rendering, Gaynor tightens the ties between the women by introducing Dawson’s brother as a love interest for Darling, who is otherwise on track to be the daughter who stayed home, caring for her aging parents.

As is likely the case in countless untold stories of similar young women, she really was the daughter who had ambition and interests beyond domestic drudgery and could not conceive of conceding her freedoms to a man.

The thread of the romance is somewhat unsatisfying as it remains not only chaste, but is rather drawn out, hitting the same or a similar note repeatedly. Overall, the novel could have been streamlined to a wonderful 300 pages, instead of a sometimes tedious 400-plus.

Some of the more interesting passages for a modern reader, though, detail the flood of interest that overwhelms Grace as the story of her heroics spreads. It’s a glimpse of what it meant to be a celebrity in a pre-mass-communications age. People want a lock of hair, a bit of her skirt, a literal piece of her in a way she finds surprising, if flattering and discomforting.

The story of Grace and Sarah’s connection, born in tragedy, leads to that of another violent storm a century later across the ocean in Newport, Rhode Island, where one of Sarah’s descendants has gone to stay. Matilda makes the voyage from Ireland pregnant and unwed, which, given her father’s political prominence, her mother’s coldness, and the prevailing norms of the era, meant she had to disappear and, ideally, come back sans baby after a visit to a relative in America.

That relative is a female lighthouse keeper who has shrugged off the gender norms of the time like a too-heavy coat and created a life for herself far from her family. She’s also not who Matilda thinks she is, and teasing out of the mystery of exactly how these women are connected to each other and to Sarah and Grace makes for one of the most satisfying parts of the novel.

Characters come and go quickly throughout, though, so don’t get too attached. A tragedy or illness swipes them from the earth as soon as you get a handle on who they are and how they fit into the narrative. It can start to seem terribly morbid and cruel until you remember that was, and all too often still is, life.

Life’s fleeting nature — then and now — amplifies the emotion of a compelling story that prompts reflection on our own time and how we, as a gender, got here. Women then were near universally disregarded by cultures and families who had great need for them but remained all too blind to their value at home and beyond.

The few who were brave enough to shake loose of the norms that restricted them, whether or not they were a direct part of a growing movement to women’s rights, did so with very little light to lead them. Today, women can draw on their example and are gathering and growing in power through their outrage at the injustice too many still face.

Tayla Burney is a journalist and moderator who lives and works in DC. She writes the weekly literary event newsletter Get Lit, D.C. and tweets entirely too much.

Modern relationships in San Francisco, under the spell of Queen Titania from “A Midsummer Night’s Dream.”