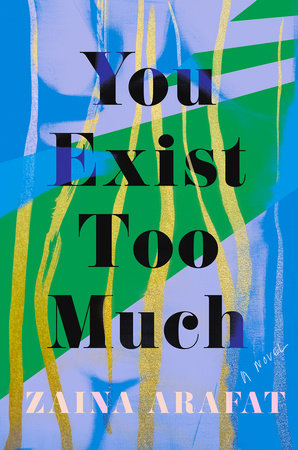 Zaina Arafat’s You Exist Too Much is an engrossing character study of a young, bisexual Palestinian American woman. Much more than an exploration of intersecting lines and identities, the debut novel revels in their clouding: “Ambiguity was an unsettling yet exhilarating space…I enjoyed occupying blurred lines.”

This is not a book about isms, however; it is squarely centered on its unnamed protagonist, whose voice is enthralling. Oscillating between prescient self-awareness and oblivion, she transports readers into her rich emotional realm. Her identity is beautifully captured when she travels to Palestine with her mother, who “knows the rules instinctively, in that part of the world, and I only learn them by accident.”

While she fits in (mostly), she also doesn’t: “Anytime I heard of another Arab girl’s engagement, it snapped me out of my gayness.” Her parents’ fraught relationship is also wryly captured: “If my mother was Hamas — unpredictable, impulsive, and frustrated at being stifled — my father was Israel. He’d refuse to meet her most basic needs until she exploded.”

While the book engages with both the narrator’s heritage and her queerness, it is ultimately a story about love addiction. Lest you groan in anticipation of high doses of schmaltz or wince at the prospect of Robert Palmer’s “Addicted to Love” being stuck in your head (sorry, not sorry), the novel’s brilliant exposé on a real psychological condition will leave you, well, addicted and wanting more.

Arafat’s description of the protagonist’s stint in a rehab program to treat her anorexia and love addiction is one of the best accounts of the rehab experience I have ever read. The writing is precise, keen, and relies on observation and no pathos, which is somewhat odd considering the subject matter. It is also well-researched. Arafat reveals love addiction for what it is — codependency, which she defines as “the inability to have a healthy relationship with the self.”

The protagonist is in love with being in love, which puts her on a never-ending Don Quixote-like quest in pursuit of the feeling. And much like Quixote, she is chasing chimeras:

“When love addicts develop a relationship with the object of their affections, they stop seeing who that person actually is, but instead focus on a fantasy image.”

Arafat captures why this addiction is particularly damaging, rejecting anyone’s glib dismissal of it as a made-up disorder. The protagonist’s emotional gyrations are captured powerfully: “I had been clinging to her I love yous like a refugee clings to a threatened nationality.”

The author writes about other characters in the rehab program with compassion and depth, too. There aren’t many books about recovery from this particular addiction — less flashy, perhaps, than drug or sex addiction — which gives the book a bright spark.

You Exist Too Much tackles bisexuality with equal care. The title is what the protagonist’s mother says when her daughter comes out, and its interpretation is rich in ambiguity: The Palestinian mother would never have had the permission or space to be anything but heterosexual. She interprets her daughter’s orientation as a demand for the right to live free of old constraints. But the phrase is also an incisive commentary on the daughter’s fixation on unavailable objects of affection and her lust for a life filled with emotional highs.

This novel is truly captivating. I read it several times over and found something new each time. Arafat’s writing extracts emotion from every word and builds vast psychological landscapes. One of the best releases in 2020, it cements Zaina Arafat’s position in the ranks of Carmen Maria Machado and Lydia Yuknavitch. I cannot wait to see what she will offer readers next.