The Last Republicans: Inside the Extraordinary Relationship Between George H.W. Bush and George W. Bush 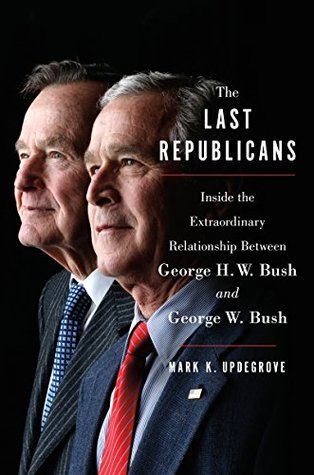 Ah, the often-complicated relationship between father and son. Especially when they carry the same name and labor in the same high-profile line of work. Twice in American history a father and son have served as president of the United States. Both times, it was the namesake son who stepped up to fill his dad’s shoes: John and John Quincy Adams and George H.W. and George W. Bush.

Despite the extensive 176-year gap between them, there are some similarities in the two pairs. Both fathers served only one term; both sons entered the White House after disputed elections; and in the 2017 presidential rankings, historians rate both fathers ahead of their sons.

The family duos also have differences. The Adams served as the nation’s chief executive 24 years apart; the Bushes only eight. Other than through letters, John Adams, while in declining health, had no opportunity to see or communicate with his son (since they lived a five-day coach ride apart) and then passed away 15 months after Quincy’s inauguration without ever having witnessed his son at the helm; while spry George H.W. Bush spoke and met with his son often throughout the latter’s eight years in the Oval Office.

In The Last Republicans: Inside the Extraordinary Relationship Between George H.W. Bush and George W. Bush, Mark K. Updegrove goes deep inside what’s taken place between the more recent father and son commanders-in-chief. His joint biography deserves a lofty place in presidential history libraries not only because it’s a well-written, balanced account of both men and their relationship, but also because he wrote it with his subjects’ full cooperation.

In the introduction, Updegrove says, “At heart, theirs is a love story. But it is far more.” He succeeds in evaluating all sides of this seven-decade saga (that began with George W. Bush’s birth in 1946), and his analysis should cause all Bush critics to re-examine their conclusions.

The book details what the two men have in common. Both had fathers who spent most of their kids’ growing-up years immersed in business and politics, while their mothers ruled the home front. Both graduated from Andover and Yale. Both moved up life’s ladder by making friends easily and maintaining mutual loyalty with their compadres. Both advanced during their adult lives through full-throttled ambition, while never being slowed by navel-gazing reflection. And both married high-octane women who supported them at every juncture.

During their presidential years, both Bushes fought Saddam Hussein/Iraq with help from some of the same advisors. Both received heavy, unjustified criticism over their delayed responses to major hurricanes caused by their compliance with federal law in deferring to state and local governments’ inadequate efforts until being authorized to bring in federal troops. Both governed amid extreme shifts in their public-approval ratings. Both consistently demonstrated civility and compassion in handling their political responsibilities.

Most important to the book, both maintained deep affection and high respect for one another, with essentially no material rifts, though from the outset of his political career, the son succeeded in intentionally separating himself from his father’s political identity.

Beyond the similarities, what makes this book such a compelling read is its assessment of the men’s differences, some of which come from the experience of growing up in different eras, as part of the Greatest Generation and the Baby Boomers.

Father Bush jumped into military service in World War II and flew bombing missions as soon as he became eligible after Pearl Harbor, while his son’s disillusionment with the Vietnam War caused him to join the Texas Air National Guard, where there was little chance of flying into harm’s way. Father was a close-to-the-vest Episcopalian who never connected with evangelicals, while the Methodist son often spoke publicly of his faith and carried evangelicals in his hip pocket during his campaigns.

At his core, father was a consensus-building, non-ideological diplomat, while son preferred to weigh different perspectives and then step out on his own as the ultimate “decider,” often guided by what he saw as moral imperatives.

Regarding their attitudes toward post-presidency legacy-shaping, the ever-humble father was unwilling to boast of his White House achievements and chose not to write a memoir, while the swaggering son went all-in and authored a strong defense of his Oval Office years with his bestseller, Decision Points.

Between the two men, the son’s life story is a more fascinating read. Father Bush has basically walked a straight line of impressive advancement over his 93 years to such an extent that Jeb Bush has described his dad as a “near perfect person.”

George W. Bush, on the other hand, had a rebel component in his wiring early on, reflected by his gallivanting during a nomadic period in his 20s, and drinking heavily until a spiritual transformation straightened him up. His leaving the bottle behind at age 40 became the tipping point on his road to success in business and politics.

As Republican presidents who aspired to lead seeking a “kinder, gentler nation” guided by “compassionate conservatism,” the George Bushes may well be the “last” of their Republican breed in the Trump era.

If that proves to be the case, Updegrove’s book provides a fitting tribute to these leaders whose character traits are worthy of admiration and who gave the presidency their best efforts, though their respective White House years will always be tarnished by the elder’s pitfalls with the economy and raising taxes and the younger’s ensnaring the country in an unsuccessful war caused by his decision to invade Iraq based on what proved to be faulty intelligence.

Only time will tell whether the glare of such tarnish shall be diminished by a deeper historical appreciation of George H.W. Bush’s landmark foreign-policy achievements (ending the Cold War and winning the Gulf War) that took place during his single term, and George W. Bush’s successful efforts in post-9/11 homeland security and his preventing a second Great Depression with quick and bold decisions after the subprime mortgage meltdown tanked the economy in 2008.

Talmage Boston is an historian and lawyer in Dallas whose most recent book is Cross-Examining History: A Lawyer Gets Answers from the Experts About Our Presidents (Bright Sky Press, 2016), with a foreword by Ken Burns.