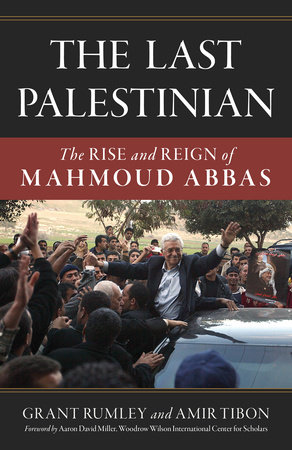 The publisher of The Last Palestinian touts it as the first book in English to profile Mahmoud Abbas, the man who succeeded Yasser Arafat as leader of the Palestine Liberation Organization and has since been the titular head of the Palestinian national movement. Astonishingly, the publisher’s claim appears to be true, and co-authors Grant Rumley and Amir Tibon have indeed delivered a crisp catalogue of the events and players that have brought Abbas and the Palestinians to where they are today.

For the Western non-specialist who tries to stay abreast of the freighted layers of conflict between the state of Israel and the Palestinians, this briskly paced book succeeds in bringing a plausible portrait of an enigmatic man to life.

Abbas was on the right side of history in his early opposition to violence being a part of the PLO toolkit, a stance that ultimately opened new political opportunities for the movement. But having made that point early in his career, he was prone to retreating from Palestinian politics at critical junctures.

He was a forceful advocate for Palestinian self-determination and institution-building, which he correctly identified as important precursors to Palestinian statehood. But later in his career, he wavered on those principles and embraced autocratic methods and administrative hijinks to remain in power.

The reader develops a sense of Abbas as a man whose head is in the game but whose heart is not, or at least not in a sustained way. Abbas seems too distracted by the intricacies of staying atop the Palestinian hierarchy to forge a comprehensive vision for his people’s future.

He falls far short of the bold hero someone in his position could have been. But one can also argue that if such a man or woman existed, his or her heroism would have been squandered in the intractable constraints that ensnared the Arabs of Palestine.

The young authors come into this book with an impressive background in Israeli/Palestinian politics, and have employed their sources and research well. Rumley is a fellow at the DC-based Foundation for the Defense of Democracy, a right-leaning, pro-Israel group active in research and advocacy on Middle East issues. And Tibon is the Washington, DC, correspondent for Israel’s center-left Haaretz newspaper and the online news site Walla News.

Their access to sources enhances their account, which at well-chosen junctures is punctuated by illuminating quotes from interviews with American, Israeli, and Palestinian principals to the events being recounted.

Sadly, as the authors themselves lament, Abbas himself would not sit for an interview. It seems there was no deal Abbas was willing to make in exchange for access that the authors could accept. One senses that was a sure-footed choice made for our benefit.

Still, the authors must have struggled with other choices that plague all attempts to write a political book about the region. First among these is deciding how far to go in explaining the background and what one assumes the reader already knows. There are no easy answers to this conundrum and, in places, the book reads like a news article, with an event disclosed in tandem with a fast backgrounder to clarify.

As an example, well past the halfway point in the book, with Arafat long dead and Abbas’ Fatah party being challenged in open elections by the Islamist party Hamas, the authors only then explain that the Palestinian Authority under Abbas is rife with financial corruption. The reader needs to know about the corruption to understand Hamas’ appeal and their ultimate victory in the election.

The authors may have assumed the financial malfeasance is well known, and perhaps it is, but in a biography of Mahmoud Abbas, one expects the dynamic of Palestinian institutional corruption to be more than a late-arriving tidbit that moves the story along.

Other important political stories make brief appearances that seem rushed. The Israeli settler movement darts in and out of the action, and the faceless Arab “street” looms over Abbas’ calculations like a scolding Greek chorus. Both serve as shorthand for irresistible political forces it would be unthinkable for politicians to resist, but the reader who suspects that characterization goes too easy on the politicians on both sides is given little to work with.

The book admirably covers a long, eventful life during a complicated crucible of history that is still central to global politics. To delve into the domestic political dynamics more deeply would have made the book a more complicated undertaking for both the authors and the reader, and the burden of doing that becomes infinitely more complex the more one values objectivity, as Rumley and Tibon plainly do.

After all, a confirmed partisan already knows all there is to know about Palestinian corruption and the settler movement and the moral dimensions of Israeli rightwing politics. It is the more curious and open-minded who may hunger for more of an explanation.

Noah Kennedy is a San Francisco Bay Area writer and author of The Industrialization of Intelligence: Mind and Machine in the Modern Age. He is currently at work on a nonfiction book about the political origins of the religious traditions of the Abrahamic faiths, and blogs on the topic at noahkennedy.net.