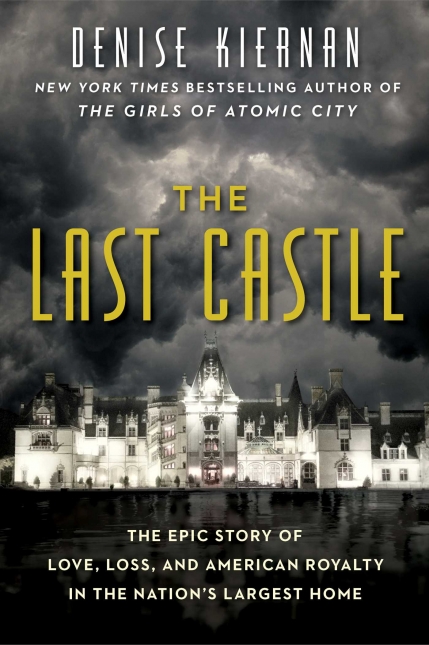 Think “Downton Abbey,” the show about the aristocratic Crawley family and its estate in post-Edwardian England. Lady Mary says to her father, Lord Grantham, “Papa, you’re always saying that we are not just the owners of Downton, but the caretakers.” Indeed, the role of the British nobility was to perpetuate family legacy.

Denise Kiernan, author of The Last Castle, writes a compelling story of our American industrial and commercial aristocracy. Our Lord and Lady Grantham are George and Edith Vanderbilt. Our Downton Abbey is the Biltmore in Asheville, North Carolina. Spanning the Gilded Age through the Progressive Era and beyond, Kiernan’s focus of this remarkable history is the Biltmore.

As an American castle, its hyperbolic magnificence still stands as a touchstone for grandeur imagined and grandeur lost. The Last Castle is contextually rich in social, political, and economic history of the late-19th and early-20th centuries.

Part diary, part journalism, part social critique, the book’s broad narrative humanizes the rich and effectively characterizes an era. Kiernan’s almost 100 pages of meticulous research notes and photos lend a reassuring gravity to the ethereal world to which we are introduced.

The Last Castle begins with Edith Stuyvesant Dresser, whose Dutch ancestor Peter Stuyvesant governed “New Amsterdam,” now Manhattan. Stuyvesant was a name that “would serve Edith in future times when money would not.”

Kiernan then introduces the reader to George Washington Vanderbilt, the grandson of “Commodore” Cornelius Vanderbilt. Leaving the family farm to begin a ferry business to Manhattan from Staten Island, the “Commodore” made investments in steamboat lines that led to control of the New York Central railroad.

“The Vanderbilt name, once perhaps associated with farmers and river rats, was more synonymous with wealth and power.” When his father, William, died in 1885, George Vanderbilt, just 23, inherited $13 million, worth approximately $318 million today. That year, George headed south to Asheville, already a resort and wellness destination.

“That’s when he saw her: Pisgah,” a mountain setting that the literary introvert found as his own Promised Land. With his first purchase of 2,000 acres, George’s vision eventually encompassed 125,000 acres of managed forests, dairy and hog farming, and herbariums, among other forward-thinking initiatives.

Vanderbilt then lured famed landscape architect Frederick Law Olmsted and architect Richard Morris Hunt to design the Biltmore and its environs. “The mountainous setting lent as much to the future home’s personality as its design. The place seemed to cry out for formal gardens, yielding to the wilds beyond, long-range views and inviting footpaths.”

As many as 1,000 workers labored on the French Renaissance-style house. There were 33 bedrooms, 43 bathrooms, three kitchens, and 65 fireplaces in the chateau’s 175,000 square feet. It was the largest house in America.

Yet perhaps because of his vast resources, George’s life had an odd kind of monochromatic habit. But that changed when he met Edith. Their marriage in 1898 represents yet another “recombining DNA of societal rank,” a match that would bring together two very American families.

“Miss Dresser was handsome and accomplished but of modest means.” Like women of the period, it was as if she were “on the auction block at the local 4-H fair.” Importantly, Edith “had that fine social instinct that her husband unfortunately lacked.”

Indeed, Edith, prompted by the feudal responsibility of noblesse oblige and her own humanity, reached out to the Asheville community to start a school, a Boys’ Brigade, a Young Men’s Institute for the black community, and, with George, the construction of the All Souls Cathedral, a hospital, and the Biltmore Industries.

In fact, Edith “strode deftly between these two worlds, one of Victorian elegance, the other of rugged mountain simplicity…Edith emerged as one who was decidedly of the people.” She was the heart of the Biltmore. The legacy continued in 1900 when she gave birth to Cornelia Stuyvesant Vanderbilt.

At the turn of the century, American industry was on the march while America’s richest families profited extravagantly. Income inequality grew wider, and social pressures began to shred the fabric of society. Yet the isolated Biltmore “evinced an anachronistic charm, as if it were not just a home, but a kind of monumental denial that time was passing more rapidly than some would have liked to acknowledge.”

Still, the Panic of 1907 affected George’s finances. While they continued to travel and entertain presidents, celebrity artists, and the social elite, the crisis meant belt-tightening. The Biltmore was becoming “an albatross.”

George died in 1914, and Edith was left to safeguard their legacy that was so integrated into the life of the village and region. “Edith spectacularly bloomed where she had been matrimonially planted” in her service to others.

A mere fraction of what it was, George’s estate was further assaulted by a new national income tax, a devastating hurricane, and World War I, after which changing tastes created a different reality.

In 1925, Cornelia gave birth to George Henry Vanderbilt Cecil. With her mother, Cornelia began an intergenerational journey to save the Biltmore we know today, a tourist attraction for over a million visitors each year.

Denise Kiernan’s layered work reflects the depth of the Vanderbilts’ influence on generations in the Asheville community. The Last Castle reminds us that the Biltmore’s obsolete extravagance really is a story of a community and those who were elevated by the Vanderbilt legacy and stewardship. That core of the story has a relevance in today’s societal divisions weightier even than the Biltmore architecture.