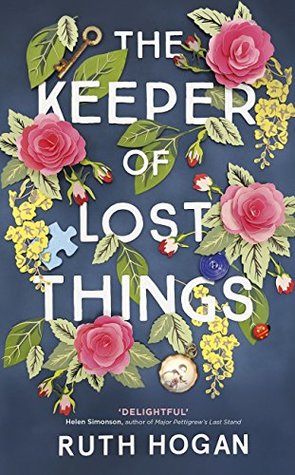 Ruth Hogan’s debut novel, The Keeper of Lost Things, asks readers to imagine a world in which the “lost things” are, in fact, people. The book’s message is that with great care and assistance, all might eventually find their place. It’s a charming notion and one which Hogan tackles gamely, if not always believably.

The author approaches the story as a dual narrative spanning 40 years. In the modern day, the novel centers around Anthony, an aging man who has spent his life collecting lost things and mourning his long-deceased fiancée; and Laura, his secretary-turned-housekeeper, a middle-aged woman recovering from a bad divorce. In the 1970s, we follow Eunice, secretary and lifelong best friend of affable publisher Bomber, who can never return her romantic interest.

Anthony bequeaths to Laura all his worldly possessions and his aptly named mansion, Padua, with one directive: that she continue his work of collecting discarded objects and do her best to return those items to their original owners.

What follows is Laura’s journey through grief over Anthony and her failed marriage to a place of self-discovery. Laura is an engaging study of the emotional pitfalls of a woman starting over. Her reinvention exists as a gift — a glorious mansion, a new vocation, and a potential love interest in the form of a handsome gardener who comes with the package. There’s even a built-in new friend in the form of the neighbors’ daughter, Sunshine.

And here is where the book falters. The boons are too great and too many to present Laura with concrete obstacles to work against. Our main antagonist is her crushed self-esteem.

Outside of Laura’s self-worth, the primary source of conflict arises from the lost objects themselves and the herculean task of finding their owners. Each object is detailed in a story that relates to the circumstances in which it was lost.

These stories contain Hogan’s most elegant writing, with such neat turns of phrase as, “He had the inestimable gift of plausibility” and “His respectability was like a neatly pressed suit.” These interludes stand as the best example of what the book aims for — a life of meaning and interconnection. The only unrelentingly dark moment appears in one tale of a lost object which will never be returned.

Unfortunately, the stories are made physically difficult to read, set as italicized passages that at times extend for pages. While this may ask the eye to linger, it also encourages a reader to skim, thereby missing Hogan at her best, along with subtle moments that tie the novel together.

When Anthony’s death missive fails to provide Laura with motivation to jump-start her life, a small ghost story kicks in. Records that play themselves, doors that won’t open, the house that Laura loves becoming yet another character, one that insists Laura get moving. The haunting adds an interesting element but comes too late to provide forward momentum.

The other half of the book belongs to Eunice and Bomber, loves of each other’s lives. Hogan creates a beautiful portrait of friendship, though it’s one that never quite escapes the melancholy of Eunice’s unrequited love. In this way, Eunice feels more fully realized than Laura. Eunice and Bomber’s interactions have a layered authenticity that makes them infinitely readable. Decades are covered with both nuance and ease.

In these chapters, Hogan’s prose has a fun bounce to it, but it’s clear early on that Eunice and Bomber serve a larger purpose — to answer a mystery in Laura and Anthony’s world. There is a sense that we’re passing time, waiting for fleeting moments when the two stories link up. Those flashes of overlap are lacking in Laura’s timeline, which gives the entire narrative a disjointed feel. When they do meet up, the satisfaction is muted.

There is a somewhat troubling message, too. Eunice’s life is entirely dictated by Bomber’s. And Laura’s lack of self-regard begins, and eventually finds its remedy, with men. There is a brief chapter in which her best girlfriend gives her a “buck up” talk over drinks, but ultimately, Laura’s growth is tied to the men she’s lived and worked with.

Though the plot dictates that Laura is an agent of redemption for both Eunice and Anthony, her own actions are less self-directed and come more at the hands of the men around her. As a keeper, she’s nicely kept.

Lack of female agency aside, the highlight of Hogan’s work is its optimistic escapism, a bit of magic that feels quite foreign in the current political climate. It relies on the wonderful idea that people can be “fixed,” given the resources.

Few things sound more perfect than the notion of living in a paid-for mansion and reuniting strangers with their lost objects, all while reinventing oneself and falling in love. Readers in need of hopeful diversion will not be disappointed.

Erika Swyler lives and writes on Long Island. Her novel, The Book of Speculation, was one of BuzzFeed’s 24 Best Fiction Books of 2015, and a Barnes & Noble Discover Great New Writers selection. She is at work on her second book. Follow her on twitter at @erikaswyler.