The Islander: My Life in Music and Beyond

Reflections of a Brit kingmaker whose hits outnumbered his misses. Barely. 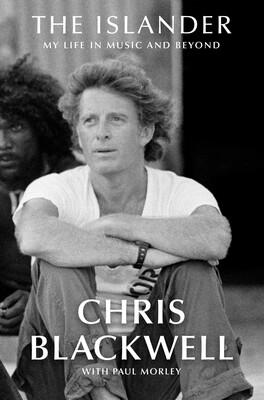 Chris Blackwell, the founder of Island Records, made as many bad choices as good ones. He turned down Elton John, thinking him “too insipid to be a performer.” He liked Spandau Ballet more — a lot more — than U2. He didn’t care for “A Whiter Shade of Pale.” He passed on Pink Floyd in the 1960s and Madonna in the 1980s.

And there’s something charming in how breezily he admits to those lapses. So many memoirs drone on about the many things the subject did right. In The Islander: My Life in Music and Beyond, Blackwell shows us how he succeeded in spite of doing a lot of things wrong. (Spoiler alert: Money helps.) It all worked out in the end because Blackwell respected the artists he did sign. He left them alone to make their records, prizing enduring artistry over a quick buck. And, in fairness, he did make a few very good choices.

One was to sign Bob Marley. The Wailers were broke and stuck in the niche market for Jamaican reggae when Blackwell brought them to Island in 1972. He reimagined them as a Black rock band, tweaking their sound just enough to make it palatable to mainstream ears. Five decades later, the album Legend has sold 25 million copies.

Another of Blackwell’s better choices was to sign U2. He really did prefer Spandau Ballet; this much is true. But once he saw the Irish band play live, Bono serenading an empty U.K. club as if he were playing Wembley, Blackwell figured them out. Four decades later, the Joshua Tree has also sold 25 million copies.

And Blackwell reinvented Cat Stevens, the London pop singer whose first songs had gone missing beneath layers of orchestral bombast. Blackwell stripped down the sound to Stevens’ guitar and powerful voice, and everything clicked.

What makes Blackwell lovable, though, is the artistic shelter he provided to some of the most brilliant and eccentric figures in American pop music. Island Records would live in legend if only as the label of Nick Drake, the sad folk troubadour who recorded three of the most splendid singer-songwriter albums of the Woodstock era. None of them sold, and Drake died of an overdose many years before his gorgeous songs found their full audience.

More than a decade later, Blackwell signed Tom Waits at a dire moment in the singer’s career: After several albums of jazzy piano ballads, Waits fell under the influence of Captain Beefheart and created an avant-garde masterpiece called Swordfishtrombones. Asylum Records promptly dropped him. Then Island picked him up, and Waits launched into the most inventive phase of his career.

Christopher Percy Gordon Blackwell was born into white Jamaican aristocracy in 1937. His father was Joseph Blackwell of the Crosse & Blackwell brand, his mother a Sephardic Jewish heiress. His parents rubbed shoulders with Ian Fleming and Errol Flynn. (We learn on page three that Blackwell’s mother, “stunning and athletic,” inspired the Pussy Galore character in the James Bond canon.) He attended Harrow, one of the finest boarding schools in class-conscious Britain. He launched Island Records in 1958 with seed money from his parents. A generous allowance got him through the lean years.

What set Blackwell apart from other British music moguls was his passion for the Black music of Jamaica. He made his first living stocking Jamaican jukeboxes and became immersed in the Jamaican deejay scene, seeking out esoteric dance records to keep feet on the floor. In the pre-download age, success meant finding records no one else had.

That background may explain why Blackwell heard something others had missed in the “Ray Charles on helium” tenor of Stevie Winwood, his first great discovery. In Winwood, Blackwell unearthed a rare white singer who could really do justice to an R&B song. Blackwell shepherded Winwood and his Spencer Davis Band to global fame, capped by the rhythm-pop classic “Gimme Some Lovin’.” Winwood then left that band to form Traffic, one of the most celebrated pop acts of the era.

Blackwell’s work with Nick Drake occupied a fertile corner of the Island kingdom governed by Joe Boyd, an American producer who worked with British folk revivalists to modernize and popularize traditional music. The collaboration produced several masterful recordings by the folk-rock band Fairport Convention, as well as I Want to See the Bright Lights Tonight, a landmark album from the duo of Richard and Linda Thompson.

Not many, in their case. But that’s another story.

Blackwell walked around in flipflops. He had a way of finding common ground with reticent stars such as Winwood and Drake, “young musicians who were utterly confident as performers or players but barely said a word in conversation.” He didn’t immediately warm to Drake’s music, either, finding it “a little flimsy.” But he trusted Drake enough to turn him loose in a studio with Boyd and let them record Five Leaves Left, a folk-orchestral masterpiece.

If Blackwell’s Jamaican ears failed to hear the promise in Pink Floyd, he quickly took the measure of the Wailers when they walked into Island in 1972. He knew the band and its legacy, and he understood its predicament. “In that era, there were radio stations that played only rock music and R&B stations that played only black music,” he writes. “And neither category of station played reggae.”

He sent them off with £4,000, and they recorded the album that became Catch a Fire. Blackwell added a few mainstream flourishes to the mix, splashes of synth and Stax-Volt guitar, “to see if we could take it out of Jamaica without actually taking the Jamaica out of it.” Catch a Fire only sold about 14,000 copies in the first year, but the Wailers slowly gathered steam. (One lingering misapprehension about Bob Marley is that he attained superstardom in his brief life. In his triumphal 1980 gigs at Madison Square Garden, he opened for the Commodores.)

Island Records played artistic host to many other iconoclastic artists over the years, bands that somehow belonged at Blackwell’s label and nowhere else, including glam-prog legends Roxy Music and Brian Eno, Robert Fripp’s King Crimson, Grace Jones, and the immortal B-52s.

British journalist Paul Morley served as writer-collaborator on The Islander. Together, he and Blackwell deliver smooth, conversational prose that conveys the subject’s essential, groovy goodness and illuminates an era when rock stars traveled without retinues of agents and publicists. The book does not quite ascend into the realm of great literature, like Keith Richards’ Life or Springsteen’s Born to Run. But it’s a fine read, recommended to anyone who seeks out those distinctive palm-tree Island labels in used-record bins.