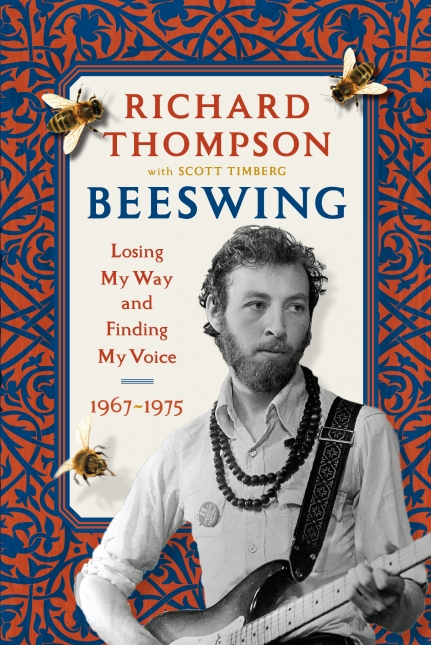 Our rock ’n’ roll bookshelf is groaning under the weight of recent memoirs by musicians of a certain age. Some singers seemingly wanted to settle scores (the Who’s Roger Daltrey comes to mind), others offered cautionary tales about the twin excesses of fame and illegal substances (see the Go-Go’s Kathy Valentine), while others appeared to simply enjoy remembering the exciting times and celebrating their gifts (hi, Dolly Parton and Debbie Harry!).

Now we’ve got Beeswing from Richard Thompson, who first gained fame as a member of Fairport Convention, the innovative British folk-rock band that arguably invented a new genre of music, fusing folk and rock with an emphasis on centuries-old song styles. In the mid-1970s, he branched out and garnered broader critical attention with his wife, the singer Linda Pettifer (later, Thompson). Their albums “I Want to See the Bright Lights Tonight” (1974) and “Shoot Out the Lights” (1982) are classics.

I’m not sure where to place the uneven new memoir from this outstanding guitarist and solid songwriter, though. The story of his early years moves along more or less chronologically yet lacks much in the way of insight or analysis. I gather Thompson has grown emotionally since this period in his life. Unfortunately, with a few exceptions, he mostly remembers it through the lens of that less introspective, more taciturn young dude.

Thompson’s book ends with him at age 26, on the verge of biggest fame he’ll ever attain while simultaneously terminating his relationship with Linda. Yet where Lenny Kravitz’s recent memoir ends at roughly the same point in his life, Kravitz has much more to say about his journey even as he sets readers up well for the exciting next segment. Thompson’s memoir concludes rather abruptly, with a somewhat flaccid epilogue in which the author sounds relieved the book is over:

“The attic is empty now...it was time to throw out some old junk, but in doing so, it brought up a lot of memories, fond, tragic, regretful, loving.”

Not exactly a “Perils of Pauline” cliffhanger.

His ex is still alive, and they have two adult children ready to read the book (including Teddy, himself a successful singer/songwriter), so I can understand why Thompson doesn’t go into detail about his and Linda’s dissolution. However, his scant remarks about the breakup, including, “I am guilty of falling out of love with Linda and wanting to end it...that was a tough time for everyone, especially our children, and the wounds are still healing,” make for frustratingly thin gruel.

Thompson is somewhat more interesting when he discusses the rise and fall of Fairport Convention and his own embrace of Sufism, a mystical form of Islam. These passages, unlike so many others, brim with energy. I’m speculating here, but I think the wind may have left Thompson’s sails mid-project when his co-author, Scott Timberg, died. Thompson notes that Timberg “cajoled me gently for a couple of years before I got up the courage to embark” on the book, and also provided much of the memoir’s premise and shape.

I’ve seen Richard Thompson in concert a number of times. He’s a talented performer, funny and a bit of a raconteur onstage. Rather than pining for a second volume of his memoir, I think I’ll look forward instead to seeing him live the next time he plays anywhere near me.