The Summer Friend: A Memoir

A heartfelt, guarded ode to a seasonal pal. 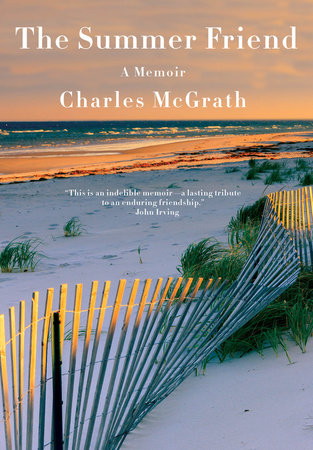 The spectacular cover of Charles McGrath’s The Summer Friend deserves its own trophy. It shows a photograph of an apricot sun setting on gentle waves that lap a sandy beach. Sea grasses sway in a breeze that has blown away footprints, never meant to last too long. The sand-dune fencing beyond the shore also bends to the wind, a force of nature that will not be denied. The elegiac scene could just as easily be an early morning sunrise, but since it wraps around a book of memories, a setting sun seems more appropriate.

The Summer Friend celebrates a seasonal bond between two men, both nicknamed “Chip,” who favor khaki pants and meet every summer to share their passion for fishing and sailing and golf. Still, the title puzzles. Why “the” instead of “my” friend? Is it because “the” imposes a certain emotional distance, as if the author is referring to a casual acquaintance, whereas “my” speaks to a closer relationship promising something more intimate?

In this case, “the” seems to represent the surface level of many male friendships compared to the deeper bonds that women establish. The Summer Friend peeks inside the psyche of one such male friendship between not-quite bros forever but seasonal pals. As such, this memoir is pitch-perfect for outdoorsy dads, sons, brothers, uncles, nephews, and the like.

Despite his literary credentials, there’s a bit of whoopee cushion in the writer, who recalls with glee the cigarette load, a practical-joke device he and his brother inserted into the tip of one of their mother’s Old Gold cigarettes. When she lit up, it exploded.

“Childish, I know,” writes McGrath, now 76, “but the memory of my mother standing there, wide-eyed, with an exploded cigarette in her mouth still makes me tear up with laughter.”

Not surprisingly, the prankster grew up to love fireworks; even today, as a grandfather, he spends hundreds of dollars on July Fourth celebrations, where he shoots off poppers, rockets, salutes, and crackers by the brick and half-brick. In fact, he devotes an entire chapter to “Blowing Stuff Up.”

The chapter that most defines McGrath, however, is “The Camp,” and his memories of the month-long vacations his family took to the type of log-built lodge familiar to many households across the country back then. For the McGraths, it was “a temporary sun-dappled idyll, a glimpse of another kind of life,” where kids bought penny candy, red hots and little wax bottles filled with sweet, syrupy liquid:

“Part of what made the Camp important to all of us — even to my mother — was that it was a toehold on specialness, a perch on the middle class, where we really had no business belonging. People like us didn’t have summer places. None of our neighbors at home did.”

Growing up in the 1950s with miniature golf, drive-in movies, and souped-up cars, McGrath learned about sex from eavesdropping on “hot rodders” tinkering under their rides. “I concluded that sex, like auto mechanics, must be largely a matter of know-how. You had to understand what went on under the hood.”

By now, you’ve deduced that this memoir is more about the author than his subject, and parts are achingly sad, particularly when McGrath writes about his parents. His mother, who married beneath her social status, appears to have been overly fond of Manhattanites and frequently berated his father for his failings:

“Social class and [his] insufficiency as a provider were ongoing themes in my parents’ marriage.”

It was a sentiment shared by McGrath himself. Looking back, he regrets that his father died “before we could get over being disappointed in each other.” He fantasizes about grabbing his dad’s arm and going for a sail, which is reminiscent of “Field of Dreams,” the film about a son who builds a baseball diamond and bleachers to reconnect with his father: “Build it and they will come.”

Here enters the other Chip, the cheerful summer friend who never disappoints. Together, the two men while away their days golfing and fishing and sailing. They make regular trips to the dump to scavenge discarded clubs; in the evenings, they barbecue and drink “brewskis” with their wives. In 30 years, there’s never a cross word between them.

McGrath goes long and deep on sailing and devotes pages to his beloved Beetle, the last mass-produced wooden boat still being sold in America. “The joy of this never gets old for me,” he writes, “the flutter of the sail, the slap of the bow wave, the burbling of the wake, the tug of the tiller, the lift of the stern quarter as it catches a swell.”

The details of sailing are numerous, sensual even, though he also waxes poetic about birds:

“Gulls everywhere; the cormorants loitering, shrug-shouldered, on rocks and pilings; and the egrets, which perch motionless in trees when they’re not mincing through the shallows.”

McGrath vividly recollects, too, the days he and Chip would meet at the crack of dawn, dragging their used clubs, and drive to five different courses to play 90 holes of golf by 9 p.m., when it was too dark to continue. They did this in tennis shoes because they considered cleats an affectation. The author reflects on these excursions with the pride of Hannibal crossing the Alps with 37 elephants. But personal details of his friendship? Not so much. “It was as if [Chip] had inside him a vast cellar where he could shove away all sorts of worries and bothers,” McGrath writes. “I’m not much better.”

Even when Chip is dying of cancer, in and out of hospitals, unable to walk, relegated to using a cane, then a walker, and finally incontinent and strapped to a bed — even then — the two men talk about the weather and the prospects for the Red Sox.

Shortly before Chip dies, McGrath reaches inside himself and writes a letter, saying for the first time how much their bond has meant:

“I said he was what Romantics used to call a genius loci — the spirit of a place, its embodiment in a person…I wrote down things I had been wanting to say for years…it was too late. And possibly I said too little. This book is what I should have given him.”

Yes, it’s too late for the summer friend, but certainly not for readers.