The Scent of Buenos Aires 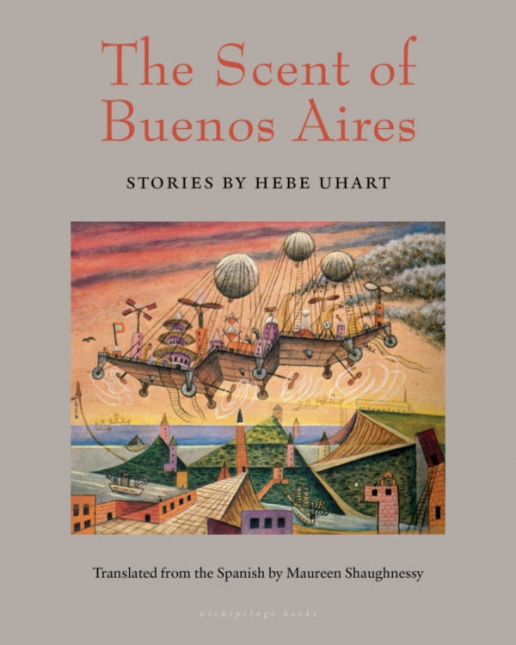 The Scent of Buenos Aires is a collection of 25 stories in which nothing much happens. Rather than full-fledged narratives, these vignettes capture the feel — the sounds, sights, and scents — of everyday life in one of Latin America’s great cities and its surrounding areas.

Hebe Uhart, who died in 2018, was one of Argentina’s most respected storytellers, known for her understated descriptions and subtle humor, as well as her eccentric and endearing characters. This is the first book-length collection of her work in English.

Uhart’s characters are mostly people who have nothing to do yet fill their days with activity. Time weighs on them. Mrs. Emma, the protagonist of “Sunday Afternoon Visit,” “found lots of little ways to pass the hours,” and yet never seems to get anything done, for “although she was mostly content with them, she didn’t know what to do when there was too much time to complete a simple task, but not enough to take care of something more involved.”

On Sunday afternoons, “when her house became even more monotonous than it was on other days,” she yearns to do something extraordinary. Finally, she decides to invite a neighbor girl named Paula to visit every other week. Paula comes with her dog, which is an effective distraction. Together, Mrs. Emma and Paula read a book, while Mrs. Emma thinks about something else. As Paula leaves, Mrs. Emma promises to buy the dog a ball, knowing full well that she will never get around to it.

How to fill their monotonous lives preoccupies some of these characters, while others lose themselves in mindless undertakings that mask their pain.

In “Bees Are Industrious,” a young priest is suddenly aware that he is deeply unhappy. At first, he thinks that he is envious of the people who confess to him because they have spouses and families and everyday problems. But then, he realizes that “it wasn’t envy, it was despair.”

The San Gabriel Veterinary Clinic, the setting for “Christmas Eve in the Park,” lies across from a common with a sparkling Christmas tree and bustling joggers, bicyclists, and shoppers. In the clinic’s waiting room, people coo over their pets as though they were ailing children.

One man has brought in his cat because the animal won’t poop. It is getting late, and he has been there all day. The cat’s paw is hooked up to an IV line, and the man pats the animal’s rump to stimulate defecation, while trying to hold the paw still. However, “The cat’s rump seems to say, ‘I’ll poop when I’m good and ready.’”

Roman, the doctor, “walks by, like someone making the rounds at a dance hall,” hardly acknowledging the man’s questions. “Come on back tomorrow, we’ll be here,” he tells the cat owner. Finally, the man leaves and goes to a bar, carrying the cat in a little box. We suspect he will spend Christmas at the veterinary hospital.

Uhart’s characters both crave and fear human contact. In “Possibly an Old Husband,” the narrator befriends an older man, only to run off when he invites her to visit. She doesn’t want to make him sad, she comments, “because, selfishly, I wanted to keep all the sadness for myself.” She then sets off on a fruitless search for old friends.

In “Human Beings Are Radically Alone,” a handsome young man named Franco tries to convince himself that he is superior to others, precisely because he feels rejected. “Ah,” he tells himself, “solitude amidst the masses, among those who don’t understand.” However, when he finally connects with a traveling Bible salesman, he experiences a moment of transcendence.

The wonder of Uhart’s writing is that, in spite of the loneliness pervading the stories, reading them does not leave us sad. Even the characters who lead the dullest lives often find delight in everyday things — for example, in caring for a perfectly ordinary plant, as in “Guiding the Ivy,” or going to the beauty shop, as in “At the Hair Salon.”

The protagonist of the latter story is so bored that, while her hair is processing, she yearns to run out to her favorite coffee bar. Instead, she passes the time reflecting about the shampoo girl, the manicurists, and “the guy who runs the register.” In the end, she leaves upbeat.

In the title story, a young girl from Moreno is fascinated by the notion of “couples who were separated,” a phenomenon that could occur only in the big city because “people in Buenos Aires were different from people in Moreno.” In fact, even the scent of Buenos Aires is different, as if the “walls were impregnated with sulfur.”

When she has the opportunity to accompany her aunt to the capital to meet a separated woman, the girl becomes excited. Although nothing much happens on the visit, she gets to listen in on some adult conversations and watch a baby get his bath, which makes the excursion worthwhile.

Uhart’s stories, filled with peculiar but familiar characters, are like wildflowers by the side of the road — easy to overlook if you’re not paying attention, yet delicate and beautiful.

Bárbara Mujica, a professor emerita at Georgetown University, is a novelist, short-story writer, and essayist. Her latest novel, I Am Venus, explores the identity of the model for Velázquez’s Rokeby Venus. Her previous fiction includes the international bestseller Frida, based on the relationship between Frida Kahlo and Diego Rivera, and Sister Teresa, based on the life of Teresa of Ávila. Mujica has won several prizes for her fiction, including the E.L. Doctorow International Fiction Competition, the Pangolin Prize, and the Theodore Christian Hoepfner Award for short fiction. Three of her stories and two of her novels have been winners in the Maryland Writers’ Association national competition. She has two books scheduled for publication in 2020: Religious Women and Epistolary Exchange in the Carmelite Reform: The Disciples of Teresa de Ávila (Amsterdam University Press) and Collateral Damage: Women Write about War (University of Virginia Press).