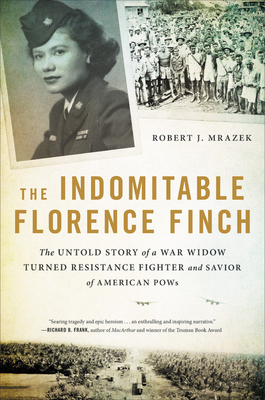 Robert J. Mrazek, the five-term Democratic congressman from Long Island, author of 10 books, and sponsor of the American Homecoming Act (1987) and the National Film Preservation Act (1988), has written in The Indomitable Florence Finch a monumental biography of Florence Ebersole Smith Finch (1915-2016), a Philippine war widow and resistance fighter in World War II.

Loring (later Florence) Ebersole was 7 years old when her father, Charles Ebersole Sr. (1880-1928), sent her away to boarding school in Manila with her sister. Her young life was extremely disrupted, seeing as her father married her mother, Maria, but later made a common-law wife of Flaviana, the daughter from Maria’s first marriage (and, so, his stepdaughter). Florence was 12 when her father died, and she supported herself from that point on.

She later met a young naval intelligence officer while working at the Army-Navy YMCA in Manila. Charles “Bing” Smith and Florence were married in 1941. Shortly thereafter, Smith was transferred to Corregidor, where, while manning the deck of a ship under attack, he pushed a crewman to safety before dying from an exploding bomb. Florence did not hear of this until May 1942. They had been married six months.

The grieving widow decided that, despite Japanese occupation of Manila following the surrender of U.S. forces at Bataan and Corregidor in 1942, she would work on behalf of the Philippine resistance. In her capacity as clerk at the Japanese-run Philippine Liquid Fuel Distribution Union, she funneled ration coupons to resistance workers to divert fuel from the Japanese war effort and help feed American prisoners of war in Manila.

Over the period of 1942-1944, the work became more dangerous as the company director, Kiyoshi Osawa, suspected employees were stealing fuel. We are never sure who named her under torture, but, in 1944, Florence was arrested by the Japanese police, imprisoned, tortured, and later sentenced to three years hard labor. She never revealed the names of other resistance members. In 1945, Florence was freed by U.S. soldiers and emigrated to the United States, where she eventually met her second husband, Bob Finch, and had two children.

She then enlisted in the U.S. Coast Guard and, in 1947, received the Medal of Freedom from President Truman. Bob died at age 53, but Florence continued to work and oversee her growing family of children, grandchildren, and great-grandchildren until her death, at 101, in 2016.

What is special about this biography is the fashion in which certain interesting and controversial topics come into view. For example, historians have long debated whether or not America was really prepared for World War II. Mrazek portrays the fact that certain intelligence officers in the Navy, such as Col. E. Charles Engelhart (1900-1995), told superiors well before Pearl Harbor that they needed to step up their espionage efforts to determine the naval and air capabilities of the Japanese military.

Even after being told of Pearl Harbor’s devastating attack on December 7, 1941, Gen. Douglas MacArthur and his staff, including Charles Willoughby, refused to allow sufficient reconnaissance away from Clark Field during the period of December 7-8, 1941. As a result, Japanese aircraft destroyed the U.S. air capacity in the Philippines that day. When queried about it later, MacArthur simply said, “Keep fighting the war.”

MacArthur was a decorated general who had prior experience in the Philippines in 1929-30. While he led the fight against superior Japanese forces (1941-42) in Bataan and Corregidor, he also engaged in a covert campaign to become the Republican nominee for president. He was taped making anti-Roosevelt comments, and when his campaign failed because of that, he demanded the U.S. armed forces allow him to lead the reconquest of the Philippines.

Another interesting element is the book’s portrayal of U.S. vs. Japanese relations with Filipinos. While U.S. soldiers were brutal during the war for independence (which ended in 1902 with the Philippines becoming a U.S. protectorate), they eventually built up schools and the local economy. When the Japanese took over, however, they treated Filipinos brutally. The head of Florence’s company, Osawa, devoted to the Japanese empire, saw his compatriots handle the natives with great cruelty.

Robert Mrazek is to be praised for his serious research and superior writing style, both of which make this chronicle of Florence’s real-life adventures an absorbing saga. Her receipt of the Medal of Freedom spotlighted her brave, fearless war effort, just as The Indomitable Florence Finch brings her life and service to our attention.

Andrew M. Mayer is a history and humanities professor emeritus at the College of Staten Island/CUNY.

The author exposes the folly in our pursuit of certainty.