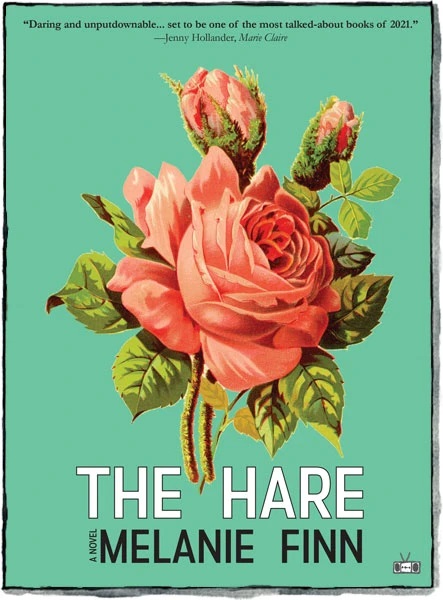 Melanie Finn’s new psychological thriller about a woman navigating the world of men while trying to protect those she loves will certainly inspire a sense of urgency and a cheer for the underdog in anyone who dives into it. In this reader, the narrative also provoked less easily digestible emotions.

At The Hare’s opening, Rosie Monroe is an awkward, relatable young woman who makes the kinds of bad decisions one might expect from an unhappy, naïve teenager under the aegis of a strict and unkind grandmother whose “frugality of love had deeper roots that went generations back on her mother’s side, into the mean soil of Scotland and the mean lives it barely sustained. Life had proved Gran’s distrust of love correct.”

So, Rosie, whose psyche has been deeply affected by the childhood molestation she endured at the hands of one of her grandmother’s lodgers, the “Tickle Man,” seeks out other sources of affection and attention — ones that, though they might be more effusive and demonstrative, are, predictably, less than stable.

When she meets the stylish, suave Bennett Kinney at a Manhattan art museum — when, moreover, the talented Mr. Kinney is interested in her — it seems to Rosie an impossible act of heavenly intervention. In him, she sees a sparkling, shining future to which she would do anything to belong.

She is too inexperienced to notice the bright red flags (Bennett claims, proudly, to have defaced a Picasso owned by his parents when he was 13 because “the reverence they held for it infuriated me”) or to consider that what he finds so appealing about her may not be her youthful energy or sturdy physique but rather her wide-eyed innocence and eagerness to please. Just as importantly, she is too desperate to escape the confines of her dreary, dull home to care.

The author describes their courtship elegantly, though there are times when she makes too much of a point of Rosie’s artlessness (reflecting on rape, Rosie wonders, “Wasn’t it something else — some other word, like the co-pilot taking over the plane? A kind of duty?”). It’s not impossible, or even hard, to imagine a woman having such thoughts; rather, Rosie sometimes seems so completely helpless that we doubt she has any chance of surviving.

When, a short time later, Bennett and Rosie endure a potentially traumatic event — one that hinges on interpretation — Rosie makes the first of many decisions to protect the peace between them at the expense of what she believes to be the truth:

“Maybe she should insist, but how? Her voice would be strong and shrill in the dark car — her voice would be loud. Already they were moving away, they were scrolling forward through time, and the distance and the minutes made her doubt herself, so she listened to the scratchy groove of Steely Dan and she handed Bennett his smoke and she sipped the Bordeaux.”

There might still have been enough time for Rosie to extricate herself from the web Bennett skillfully weaves, but then she falls pregnant. At an abortion clinic, she imagines the life she will have afterward:

“For a moment, Rosie sat. Her turn was coming up. Like a number at the DMV. She was going to get an abortion. Then she’d go back to New York, she’d finish her degree, she’d learn what it meant to be an artist and it would be the beginning of her true journey…There would be another man, as [her friend] had promised, another lover, even lovers like weeks or seasons.”

But for reasons not entirely clear to the reader that perhaps have as much to do with loneliness as anything else, Rosie cannot go through with the termination. Thus begins life with baby Miranda in a rickety old farmhouse on the outskirts of the tiny New England town where Bennett has deposited them and which he occasionally visits.

Rosie must learn how to heat the house, feed herself and her daughter, and cope with Bennett’s frenetic drop-ins: “I came back because I love you, Rosie,” he tells her once after being gone for months, and Rosie reflects silently that “this is love, what all the fuss is about, the wielding of love to make you do what you don’t want to…to wear the bright halo of one who is chosen not discarded or ignored.”

Despite the centrality of Rosie and Bennett’s relationship to the book, author Finn narrows the focus to Rosie after yet another earth-shattering event involving both of them. It’s rewarding to watch how Rosie’s life unspools without the specter of Bennett over it, though the existence she cultivates is far from perfect.

Readers will have to decide for themselves whether they find the conclusion of this engaging novel satisfying — when Rosie’s life, never easy, takes a last, unexpected turn that forces her hand once again.

A deeply evocative collection that's both disturbing and brilliant.

A poignant evocation of Paris in the 1920s and the Lost Generation through the eyes of Ernest Hemingway’s first wife, Hadley ― his “Paris wife.”