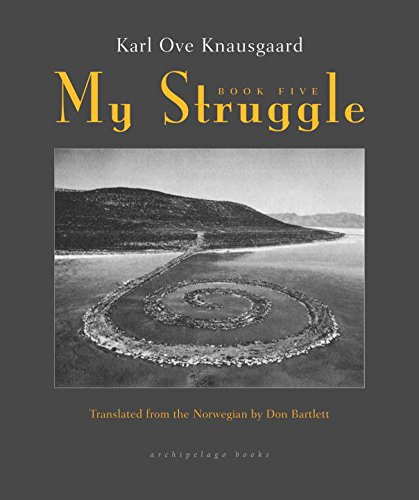 Much takes place in Karl Ove Knausgaard’s My Struggle, Book 5: drinking, song writing (“Love her, Love her Dog”), marriage, publishing a first novel, infidelity, and divorce. And we live through it all the while firmly lodged within Knausgaard’s consciousness.

If you are able to return to your own consciousness at some point, you may find yourself obsessing over this question: Why do you like his writing? Consider this passage, which takes place after Karl Ove has cheated on his girlfriend, Gunvor, whom he considers to be a lovely person:

Yes, I was distraught now and would be for weeks, but time dims everything, even the worst horrors, it interposes itself, minute by minute, hour by hour, day by day, month by month and it is so immense that ultimately what happened completely dissolves and is gone. It is there, but so much time, so many minutes hours, days and months lie in between that it can no longer be felt. And it’s feelings that count, not thoughts not memories. And slowly I came out of it, all the while cleaving to the notion, the redeeming notion, that if she doesn’t know, it doesn’t exist.
It didn’t exist, she came back to Bergen and at first my guilt flared up again, I was a liar and a traitor, a bad person, an evil person, for some weeks that was what I thought when I was with her, but then that too dulled and lay like a constant though manageable emotion slightly beyond my consciousness.
It hurt when she smiled, it hurt when she said she loved me and I was the best thing that had ever happened to her.
Then it didn’t hurt anymore.

Note the repetition and lengthiness. Note the comma splices. Note the lackluster prose. And note how perfect it is. The psychological insights appear to be more accurate than accurate. If you’ve cheated on your partner, and if you also happen to be sensitive enough to feel terrible about it, isn’t this a flawless representation of how you would go about burying your messy guilt?

The run-on sentences add momentum to the prose, and you find yourself being hurled from one page to the next, almost as hooked as you might have been while reading Stieg Larsson. (Okay, perhaps I exaggerate!)

This volume, which largely deals with how Karl Ove became a writer, also hints that he hasn’t chanced upon his writing style by fluke. His erudition is obvious, as is his philosophical nature. He has thought about writing deeply, and he has read widely; Ulysses, American Psycho, and Paul Auster are among the dozens of books and authors that dot this volume’s pages. And then there are other clues regarding the genesis of his writing style.

Immensely ambitious, he boils with envy when friends become writers. And when he works, he works hard. At one point in the book, he reads a friend’s manuscript and is disappointed that none of his friend’s personality is apparent in the writing, which he judges as derivative.

Knausgaard’s attempt, it seems, is to achieve the opposite effect. He aims to shoot the serum of his soul into his prose. And whatever else you may say about his prose, you cannot accuse him of not being an original — some obvious but limited parallels to Proust notwithstanding.

But, all said and done, this could have been a maniacal string of confessions (and will no doubt strike some reasonable readers as just that). Yet this extreme truth-telling exercise is made palatable, even charming, through thick threads of self-deprecation and almost imperceptive filaments of humor woven into its tapestry.

About the unequal relationship between him and a friend who has become an established writer, Knausgaard writes:

He was a writer; I wasn’t. If he looked left, I looked left, to see what he found so interesting. I was so puppy-like, I was destroying our friendship.

As the two friends travel together in Germany, the friend wants to go see a poet reading his work at the Romanian embassy in Berlin. This is a terrible idea. Karl Ove cannot comprehend German. But he cannot say no. So they go. The friend quickly falls asleep during the session, and the poet chooses him as the audience member to stare at.

So all the responsibility rested on me. If he was asleep I would have to appear doubly interested. I opened my eyes wide, studied the ceiling pensively, narrowed my eyes, that was interesting, nodded to myself, stared straight at him with a look of acknowledgment.

While Karl Ove may tell lies and pretend, Knausgaard appears to only care about capturing truth. Of course the Karl Ove that Knausgaard creates is a construct. But Knausgaard’s triumph is that you wouldn’t know.

Ananya Bhattacharyya is an assignment editor at the Washington Independent Review of Books. Her work has appeared in the Guardian, the New York Times, Al Jazeera America, Washingtonian, VICE, the Baltimore Sun, and Reuters. She tweets at @AnanyaBhatt.

By Eduardo Halfon; translated by Lisa Dillman and Daniel Hahn